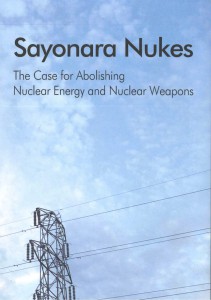 I first came across Dennis Riches’ blog about a year after 3.11 when I was in India studying anti-nuclear movements. I read it avidly for its rich perspectives and home truths. Dennis was offering cultural, psychological, socio-economic explanations for the innumerable crises that the Fukushima Daiichi meltdowns had unleashed. Many of my friends at the time were focused on technical explanations, which although of course vitally important, didn’t answer the really big questions for me, such as: How can the nuclear industry still be telling the same lies? How can TEPCO still be allowed to operate as a company? What are the structures we have to change here? His blog described the stark reality that we were facing in a matter-of-fact way but with strong undercurrents of extreme passion, which somehow seemed to me exactly what was needed.
His recently released book is a compilation of these blog posts, divided into three parts: Articles that relate nuclear issues to works of literature, cinema and popular music; articles primarily about nuclear energy; and articles primarily about nuclear weapons.
The first section connects nuclear issues to figures as wide apart as Don Quixote and Bob Dylan, and compares the situation in Japan immediately after the Fukushima Daiichi disaster to a sci-fi drama called LOST. Although I have never seen this drama, Dennis’s comparison of the traumatized victims in the drama who somehow find themselves in an island paradise that has been transformed by technology and their dazed befuddlement and denial of reality, or perhaps inability to even grasp what had happened to them, and the situation in Japan in the nuclear disaster aftermath, make a lot of sense. We are reminded that in times when we feel utter disbelief, it is often the arts that offer the best explanation as to how and why we find ourselves in this predicament. This section also includes other film and book reviews and discussions.
The other two sections also contain book reviews as well as reports of conferences that Dennis attended, including the 2015 Pugwash Conference in Nagasaki (which he is quite critical of) as well as a report of a presentation on India’s nuclear program by Kumar Sundaram given in 2014 when he was in Tokyo. Articles on the devastating affects of the nuclear industry on citizens of various countries around the world, including the US, the Pacific Islands and Dennis’s native Canada are described with a focus on the voices of the victims. More abstract ideas such as the ‘institutional self-deception’ of the nuclear industry as well as an article titled ‘Commucapitalism’ about how ‘plutonium cities’ in both of the superpowers adopted the same political and social values despite their opposing national ideologies.
Many of the articles are 10-20 pages long and this allows Dennis to present many details, but also articulate overarching ideas and arguments. Each article is followed by copious endnotes and in many cases further reading lists providing a wealth of information on a wide variety of topics. Although this may sound a little academic, the articles are very easy to read and draw you in with their forthrightness and slight sarcastic edge.
The time period covered is from immediately after 3.11 through to more recent articles on the Trump administration. I would have liked to have known the actual date that the original blog was published as I think this might give some indication of the phases that Dennis, and perhaps many of us, went through and the way our thoughts developed post 3.11.
The book is published by Seijo University’s Center for Glocal Studies and is available in pdf form, free of charge at
www.seijo.ac.jp/research/glocal-center/publications/english-study-series/index.html
<Caitlin Stronell, CNIC>