The first publicly disclosed leak during the active tests at Rokkasho reprocessing plant occurred at 3:40 am on 11 April 2006. Forty liters of radioactive fluid leaked from the hull rinser vessel, which is in the dissolver cell within the Head End Building. (Hulls are the undissolved remains of spent fuel cladding after the spent fuel has been dissolved in nitric acid. They are rinsed to remove residual radioactive materials.) 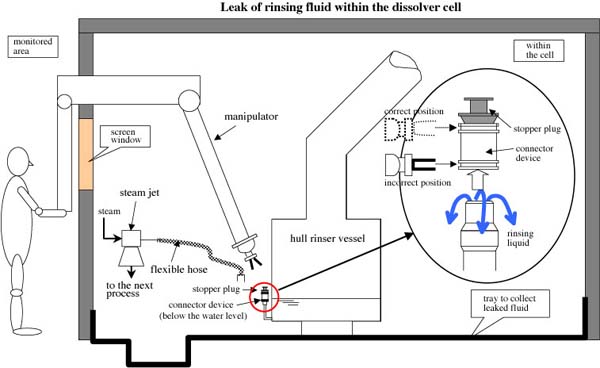 Perhaps a useful way of thinking about the amount of radioactivity involved is to imagine that all gamma radiation came from cesium-137 and that all the leaked fluid was poured into a plastic bucket. In that case the dose at a distance of 1 meter would be 5 mSv/hour. The permitted annual dose to the general public is 1 mSv/year, while the permitted annual dose for radiation workers is 20 mSv/year (limit over 5 years of 100 mSv).

Clearly it is just as well that this fluid was not released into the environment and that no one was directly exposed to the radiation. This leak illustrates very clearly the dangerous nature of the materials being handled at the Rokkasho reprocessing plant. No doubt the incident will be put down to worker error, but we must question the training standards that allowed such an error to occur. Furthermore, worker error is no excuse when such dangerous materials are involved.

This article is based largely on a more detailed analysis by Professor Michiaki Furukawa in CNIC’s Japanese newsletter.

1. Cesium-137 also emits beta rays, but JNFL doesn’t mention these. Also, Becquerel is not really appropriate for gamma radiation, but we have followed JNFL here for simplicity’s sake.