Anti-Nuke Who’s Who Toshiko Takeda: Representative of the committee preparing the lawsuit against the Ohma nuclear power plant Nuke Info Tokyo No. 119 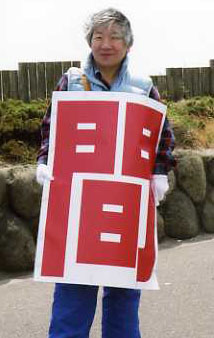 A bleached statue of the poet Takuboku Ishikawa1 sits in a small park in the city of Hakodate, which he loved so much. From this park, you can see the town of Ohma, on the opposite coast across the Tsugaru Strait. Since last autumn, Toshiko Takeda has been going to this park to stand on the beach and shout out to sea her opposition to the planned Ohma nuclear power plant. Or else she writes in the sand, “We don’t need the Ohma nuclear power plant”. Toshiko is a key figure in the “Donan2 Stop the Ohma Nuclear Power Plant Committee”. These days she is busy every day distributing leaflets in the street, or giving speeches as the representative of the plaintiffs in a planned lawsuit. The license for the Ohma nuclear power plant is expected to be granted this year. If it is granted, opponents plan to launch a suit demanding the annulment of the license approval.Toshiko was born in 1949 in Asahikawa. At the age of 20 she was baptized as a Christian. She joined the YWCA when she was a student in Kyoto and became involved in the peace/anti-war and human rights movements. She says that through this she became aware of the individual’s responsibility to society. Ever since she married and moved to Hakodate she has been involved in peace and human rights issues. In 1982 she helped establish a growers’ and consumers’ collective for the purchase of organic vegetables. With her friends she got involved in all sorts of activities to enable them to enjoy safe food in this naturally abundant land. Visiting farms to discuss what they should grow and weeding at farms where herbicides were not used gave her a deep personal experience of environmental issues. She says that behind all this is the interest she has had since her university days in Minamata disease.

In April 1986, the Chernobyl accident shocked her so greatly that all other environmental issues seemed to pale in comparison. Recognizing the horror of never-ending radioactivity, scattered in an instant and contaminating on a global scale, she became even more strongly opposed to nuclear power. At the same time as opposing the nuclear facilities at Rokkasho, she became a key figure in the opposition to the nuclear power plant, which was to be constructed in the small village of Ohma just 18 kilometers away from Hakodate. For the past few years, as deputy director of the “Natural Energy Project”, which was established to promote a nuclear phase out, she has been promoting wind energy and the “candle night campaign”. The latter encourages people to turn off their electric lights and introduce candles into their daily lives.

“The Chernobyl nuclear accident spread contamination over the whole world, while the radiation released on a daily basis from the Windscale reprocessing plant in England threatens the health and lives of the residents. I will not let them build facilities which we know in advance will release this dangerous stuff.” With quiet determination she communicates this message.

An unwiped tear rolls down my cheek. Not forgotten the one who showed me a handful of sand.
Translation by Philip White (NIT Editor)

Lying on the dune sand, this day I recall, remotely, the anguish of my first love.
Original and translation on the web site of the City of Hakodate
www.donan.info/modules/pukiwiki/251.html

2. The Donan region, where Hakodate is located, is in the south of the island of Hokkaido. Ohma is in the far north of Honshu, the largest island in Japan.

* Yasuko Nomura is a journalist for a local free newspaper in Hakodate. She is also involved in the growers’ and consumers’ collective and in anti-nuclear activities with Toshiko Takeda.