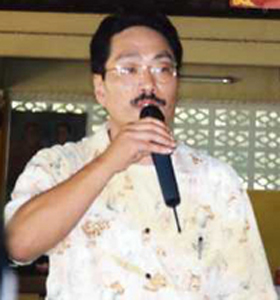 Sadao Kaneko was born into a farming family in 1956 in Teradomari Town (now part of Nagaoka City) in Niigata Prefecture. In the 1970s, when he was a university student in Tokyo, he learnt from his friends about the fierce struggle against the construction of Narita Airport by the farmers of Sanrizuka, so he went there to see for himself. It was just when Narita Airport was about to open. He was very impressed by the farmers he met. One day he was at a meeting where a young person from Kashiwazaki was making an appeal. That was Sadao’s introduction to the plan for a nuclear power plant at Kashiwazaki-Kariwa.At the time there was a great struggle going on between the citizens of Kashiwazaki City and Kariwa Village and Tokyo Electric Power Company (TEPCO) over the destruction of forests for the construction of the nuclear power plant. When he graduated from university and returned to his hometown, it was quite natural for Sadao to join the ranks of the protesters. As time went by, he also became involved in the campaign against the Maki nuclear power plant plan (see NIT 98) and joined the landowners trust opposed to the Maki plan. The town where Sadao was born and raised, and where he still farms, is 35 kilometers from Kashiwazaki-Kariwa and only 15 kilometers from Maki Town. Ever since he graduated from university, Sadao Kaneko has walked hand-in-hand with the citizens of Kashiwazaki, Kariwa and Maki.

Sadao says, “The campaigns of the people of Sanrizuka, Kashiwazaki-Kariwa, and Maki have something in common. People subjected to formal and informal social constraints threw off their yoke and created a moment in which they expressed themselves freely. It is impossible to express in words the sense of liberation experienced in that moment. You could even call it exquisite.”

Also, the connections between people all around Asia were deepened. “The people of Buan in South Korea say that when they felt entrapped, confronted by the violence of the state, the campaign for self-determination through a local referendum by the people of Maki, with whom they had maintained contact, was like a revelation. Eventually, the people of Buan also achieved self-determination through a local referendum on the proposed nuclear waste dump. Over 70% voted against the dump. It is hard to forget the solidarity between Maki and Buan.”

In July this year the site of the Kashiwazaki-Kariwa nuclear power plant was shaken by the Chuetsu-Oki Earthquake. The plant suffered countless instances of damage and radioactivity was released into the environment. The Madogasaka Fault moved and the ground directly beneath the plant was pushed up. Locals had pointed to this fault from the earliest days, so the failure of TEPCO, which assessed that the fault would not move, and the government, which accepted that assessment, is plain to see.

* Masashi Kuwabara fought alongside Sadao Kaneko in the campaign against the Maki nuclear power plant.