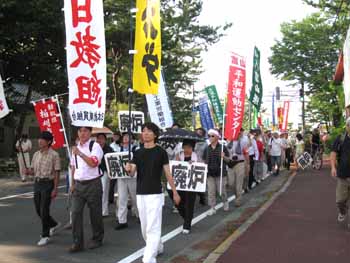 On the afternoon of August 28, 300 people from around Japan gathered at a meeting in Kashiwazaki City hosted by the “Citizens’ Group to Protect Life and Home Town from Nuclear Power Plants”. Three years since the July 16, 2007 Niigata Chuetsu-oki Earthquake, Units 7, 6 and 1 have been restarted (in that order), but the local residents protest the way in which Niigata Prefecture’s technical committee has handled the matter. They point out that it did not properly debate the issue. Instead, throughout the whole process it worked on the assumption that the plants would be restarted. An inspiring march was staged to protest the fact that the nuclear power plants were restarted even though safety was not assured and citizens’ anxiety about accidents was not allayed. The march gave expression to the participants’ shared belief that we have entered an era of worldwide transition in the energy field.

In the morning, about a hundred people turned up to see a new film (Japanese title: Mitsubachi no haoto to chikyu no kaiten = The sound of the honeybee’s wings and the revolution of the earth) by Kamanaka Hitomi (see NIT 130). The film has two strands, one following the lives of people in Europe pursuing new renewable energy paths and the other showing the struggle of the people of Iwaishima (see NIT 125), whose lifestyles are threatened by the planned construction of the Kaminoseki Nuclear Power Plant (see NIT 133). The audience included not only opponents of nuclear power, but also local people from a study group considering ways to coexist with the Kashiwazaki-Kariwa Nuclear Power Plants.

The keynote speaker at the afternoon meeting was Professor Koichi Hasegawa, an environmental social scientist at Tohoku University Graduate School. His presentation was entitled, “Is nuclear energy the answer to global warming?” He answered this question by saying that a policy which relies on nuclear energy will inevitably lead to an increase in CO2 emissions and that we must promote efficient use of energy and renewables. He gave the example of Kuzumaki Town in Iwate Prefecture, which has been highly successful as a “milk, wine and clean energy town”. He also presented the situation of wind power throughout the world and criticized the Japanese government’s inadequate policy for promoting renewable energy.

Three people delivered appeals about major problems associated with the Kashiwazaki-Kariwa Nuclear Power Plant. Kazuyuki Takemoto (see NIT 111), representing three local groups opposed to nuclear power, reported on key problems related to ground condition; I explained the situation regarding the integrity of equipment and seismic safety on behalf of the Group of Concerned Scientists and Engineers Calling for the Closure of the Kashiwazaki-Kariwa Nuclear Power Plant (see NIT 123); and Chie Takakuwa of Niigata Women Thinking about Life and Nuclear Energy (see NIT 135) spoke about the problems of Niigata Prefecture’s technical committee.

Ongoing deliberations about Unit 5
When the previous issue of NIT went to press KK-1 had not yet recommenced commercial operations and deliberations had not finished. There were discussions about the operation of valves and the lack of seismic safety leeway for control rods. However, the central government’s Nuclear Safety Commission gave the go-sign on July 29 and Tokyo Electric Power Company (TEPCO) resumed commercial operations on August 4, three and a half months after TEPCO submitted its application for permission to Niigata Prefecture, Kashiwazaki City and Kariwa Village. There was no meeting between the governor and the mayors and there was no public meeting to explain the restart to the residents. In the past Niigata Prefecture had held such meetings, but this step was omitted this time. Now three of the seven reactors have resumed commercial operations (Units 1, 6 and 7).

In regard to KK-5, we reported in the previous edition of NIT that eight groups had submitted open questions to members of the subcommittee dealing with equipment integrity and seismic safety regarding cracks in the reinforced concrete walls of the turbine building. They submitted further questions under three headings on August 11, after totally inadequate discussion of their original questions by the subcommittee at its July 7 meeting. These questions can be summarized as follows:

1. What would the shear stress be during a design basis earthquake (606 Gal) and an earthquake which the plant is supposed to be able to withstand after seismic reinforcement (1,000 Gal) on those reinforced concrete parts that exceeded the seismic movement that they were supposed to be able to withstand at the time of the earthquake (442 Gal).
2. Is the estimated shear strain at which cracks will form (0.25 x 10-3) appropriate?
3. Is TEPCO’s crack width assessment standard (1.0mm) appropriate?

The subcommittee considered these questions on August 30. TEPCO gave an arbitrary response to number three and was requested to provide further information.

It was revealed in photos taken photos three days after the earthquake by the Nuclear and Industrial Safety Agency (NISA) that movement indicators of spring hangers and constant hangers (from which pipes are suspended) in KK-5 exceeded their design range. Subcommittee member Masahiro Koiwa submitted questions in relation to this matter. Debate is continuing between Koiwa and TEPCO about this matter. Koiwa is asking whether the aftereffects of the earthquake remained in the pipes suspended from these hangers and that this resulted in residual strain, which caused the movement indicators to exceed their range. TEPCO refuted Koiwa’s suggestion, but its reasoning was vague and further discussion of this issue was rolled over to future meetings.

With citizens submitting questions, subcommittee members actively taking up the debate and reservations about the draft report, the way forward for KK-5 is shrouded in mist.