The rally, organized by the Executive Committee for 10 Million People’s Action to say Goodbye to Nuclear Power Plants, was a very successful and epoch-making event with 60,000 people from all over Japan taking part at the Meiji Park, Tokyo.  Sendagaya station, near the park, and the access ways to the park were also filled with people going to take part in the rally.  This is the first time the anti-nuclear movement has been able to gather such large numbers of people at one time. Thinking about the past, when we had a gathering two years after the Chernobyl accident, in 1988, it was attended by 20,000 people.  That was biggest gathering at the time, but we have now been able to change the situation.

The opening remark was made by Kenzaburo Ooe, a Nobel Prize winner. He said we Japanese are as yet unsafe and we must convince people in the nuclear industry that another nuclear accident is possible by making our voices heard at today’s demonstration.

Women and men, younger and elder must become united in their mind and shout with one voice “No Nukes!”  The people who participated in this event must have had full confidence that they could change Japan’s nuclear policy and bring about a nuclear power phase-out in this country.  The Executive Committee is also calling for 10 million signatures by next March.

Rallies were also held in many other locations, such as Nagasaki City, Sapporo City, Nagoya City, Osaka City, Kyoto City, and so on. 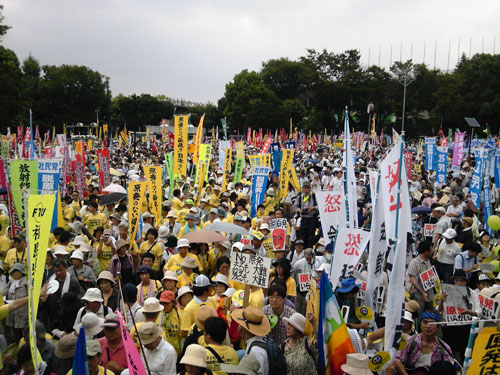