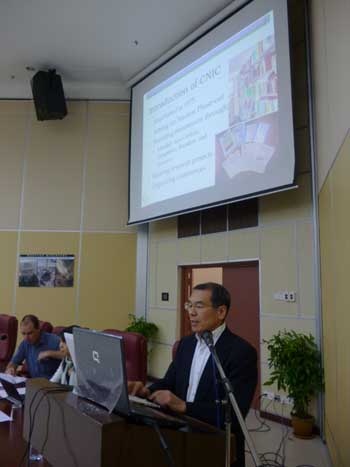 I was invited to participate in a conference entitled “Climate and Energy Forum: Towards Energy Efficiency & Safe Options,” held in Malaysia. The conference took place over four days, from October 8 to 11, at the University of Malaysia in Kuala Lumpur. It was organized by three major Malaysia-based organizations, the Sahabat Alam Malaysia (SAM) or Friends of the Earth Malaysia, the Consumers Association of Penang (CAP), and the Third World Network, as well as by the Friends of the Earth Japan. The first two days were taken up with report presentations and discussion sessions, which continued from morning till night. On the 10th, the represented NGOs had a day-long discussion about future actions. A press conference was held on the morning of the 11th, marking the end of the Forum.

Participants from Japan were Ms. Eri Watanabe of the Friends of the Earth Japan, Mr. Seiichi Nakate of the Fukushima Network for Saving Children from Radiation, and myself. Participants from other countries included Dr. Jim Green from the Friends of the Earth Australia, two delegates from the Korean Federation for Environmental Movement (KFEM) including Ms. Kim Hye Jeong, and three delegates from the Alternative Energy Project for Sustainability (AEPS), Thailand, including Mr. Santi Choakchaichamnankit.
The reason why the conference was held in Malaysia was to express protest against the nation’s plan to introduce nuclear power generation in the period between 2013 and 2015. The location of the nuclear power plant is unknown, since the Malaysian government has not officially announced the location. However, if the government plans to start nuclear power generation in 2013 or around that time, it would be no surprise if it had already made an informal decision on the location.

The conference was attended by Malaysian governmental officials in charge of renewable energy, and the officials talked about the current conditions and future plans of the renewable energy sector in the country. Delegates from the renewable energy department of Tenaga National, which is the main electric power provider in Malaysia, were also present, and actively participated in the question-and-answer session. This company used to be run by the government, but has recently been privatized. Nevertheless, it is still virtually a state-run company, because its stocks are held by the government.
With a population of 28.4 million in an area of 330,000 km2, which is slightly smaller than the area of Japan, Malaysia has been increasing its gross domestic product by an annual average of greater than 5% during the last ten years. A skyscraper was under construction in front of the Kuala Lumpur Sentral station, and brisk construction of high-rise apartment buildings is ongoing. Expecting an increase in the demand for electric power in the future, the government regards nuclear power generation as a necessity. On the other hand, NGOs argue that energy-saving efforts should be made and renewable energy promoted. As a country that produces and exports petroleum and natural gas, Malaysia is self-sufficient in energy. Supplied with gasoline at relatively low cost, Malaysian society is dependent on cars, experiencing traffic jams on a daily basis. The power supply in the country consists of 58% natural-gas generation, 33% coal, and 9% hydroelectric power. Of the nation’s total power consumption, 78% is used by the industrial and commercial sectors.

I came across Mr. Gurmit Singh at this conference for the first time in many years. Mr. Singh is representative of the Center for Environment, Technology and Development, Malaysia (CETDEM). He and I were members of the Sustainable and Peaceful Energy Network, which was active for about five years until around 2002. Mr. Singh stressed the importance of energy-saving efforts by energy users. He argued that, although old facilities could be a bottleneck, users should make energy-saving efforts. He was also critical about Malaysian society’s dependence on automobiles.

Concerning renewable energy, the government officials said that the nation plans to proactively promote biomass power generation, small hydroelectric generation and solar generation, and to build facilities that would generate four million kilowatts to accommodate 17% of the peak power demand by 2030. An NGO from the island of Borneo presented a case of small hydroelectric generation. As for wind power, the nation’s climate conditions appear not to be suitable. Other presentations included those by groups of citizens opposed to local projects. One was against a thermal power generation project, and another was against large-scale dam construction project. A group of Borneo islanders opposed to a dam construction project also participated.

Regarding nuclear power generation, the Malaysian government plans to purchase uranium from Australia. Participants asked Dr. Green of FoE Australia whether the Australian and Malaysian governments had reached an agreement on the procurement of uranium and whether such information might be available in Australia. It was learned that no confirmed information was available in Australia. There ensued a strong discussion on the poor information transparency of the two governments. According to statements made during the discussion, the Malaysian government plans to build two one-million-kilowatt reactors by 2020. I also heard that, probably because of the Fukushima Daiichi disaster or perhaps because of Korea’s strong ability to negotiate, Korea is currently ahead of Japan in the competition to supply the reactors. Korean participants were asked about the status of nuclear power generation, accidents, and information disclosure in the country.

As participants from Japan, I gave an overview of the Fukushima Daiichi disaster, Mr. Seiichi Nakate introduced the actions by the Fukushima Network for Saving Children from Radiation, and Ms. Eri Watanabe of FoE Japan presented actions in Japan against exporting nuclear power plants. Mr. Nakate was unable to attend the conference on the day when his talk was originally scheduled, and Ms. Watanabe gave a talk in his place. Mr. Nakate talked on the following day, October 10.

Ms. Kayo Sunazawa, who is originally from Japan and is now married and living in Malaysia, participated in the conference, and warmly welcomed the three of us from Japan with abundant local fruits, such as mangos, papayas, and jackfruits. We appreciated them very much.