Reference Material: Japan’s Separated Plutonium Inventory (as of end of 2014)

On July 21, 2015, the Japan Atomic Energy Commission (JAEC) released the inventory data for Japan’s separated plutonium as of the end of 2014. Compared with the data for the end of the previous year, almost no change has taken place, because no mixed oxide (MOX) fuel was returned to Japan from overseas and the Rokkasho Reprocessing Plant in Aomori, Japan, separated out no plutonium during the year. The only difference is that Japan’s UK-stored inventory increased 0.7 ton (694 kg Putot). The increase is most likely to have been the result of an allocation of plutonium reprocessed in the country, as in 2013. The amount of spent fuel reprocessed at THORP (Thermal Oxide Reprocessing Plant), located in Cumbria, England, has not been officially announced, but according to CORE (Cumbrians Opposed to a Radioactive Environment), the plant reprocessed 58.9 tons of spent fuel in fiscal 2014. The separated plutonium is allocated to the contract countries according to the respective contract amounts. A report says that one more ton will be allocated to Japan in the future.

During a discussion at the JAEC Commissioners’ meeting of July 21, 2015, an opinion was heard (from Yoshiaki Oka, JAEC Chairman) that, although plutonium inventory data had been released in the unit of kilograms since 1993, it may be necessary to introduce a new perspective because the international situation has changed from the time when the data releases began. More specifically, there were the simultaneous terrorist attacks in the US on September 11, 2001, followed by other terrorist incidents. His statement was rather vague, but it may possibly lead to a review of the release of detailed data, and we need to pay close attention to such a possible change in the future. 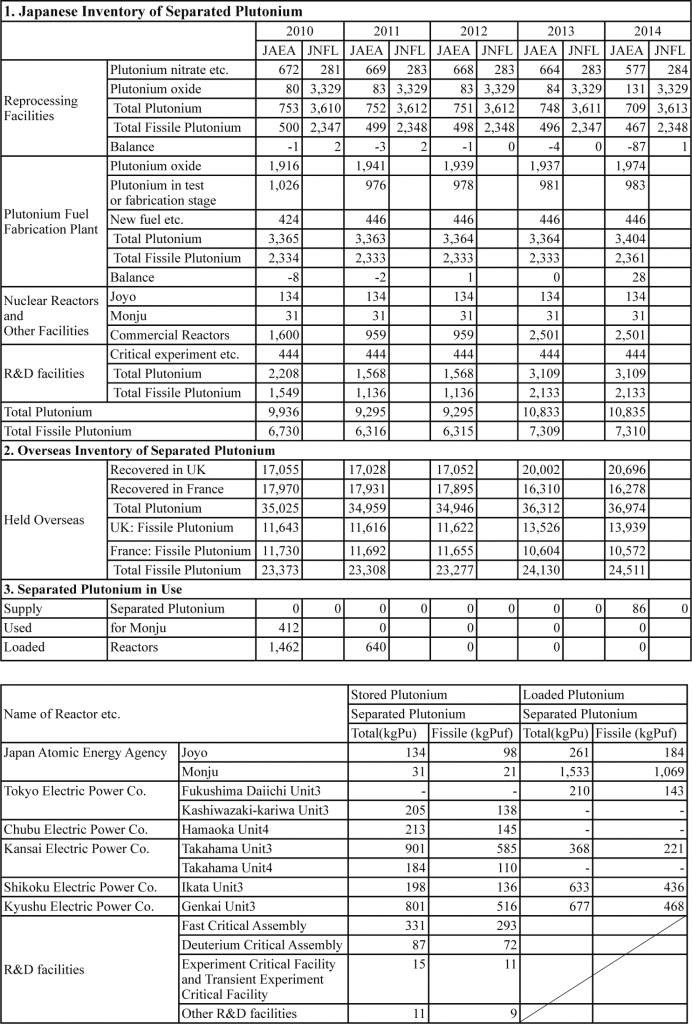