Towards a Peaceful and Sustainable Future Nuke Info Tokyo No. 81 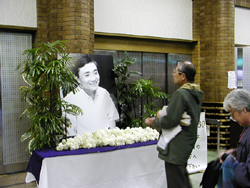 Dr. Jinzaburo Takagi’s death is a very great loss for CNIC. On behalf of all CNIC staff, I would like to express our firm determination to carry on Dr. Takagi’s important and distinguished work to free Japan, and the world of the nuclear threat.

I wanted to believe that Dr. Takagi’s death was to be far in the future. However, I was suddenly told on 8 Oct. 2000 that his condition had become critical. I rushed to the hospital, and was able to see him for the very last time.

Our association began in 1981 when I organized a lecture of his. At that time, I had never dreamed that I would begin working at CNIC. However, the anti-nuclear movement became very strong in Japan following the Chernobyl accident, and as a result I began working under Dr. Takagi’s instructions. It was very exciting and rewarding to work with him. Anyone who came in contact with Dr. Takagi was drawn to his nobility and integrity. Initially, Dr. Takagi was committed to nuclear research and belonged to the nuclear industry, but he became its most rigorous critic. From the time that he established CNIC in 1975, he was a “citizens scientist” and he remained so to the end of his days.

It is my impression that the accident at Chernobyl prompted the Japanese anti-nuclear movement to spread from local area where there were plans for nuclear facilities to the wider population in the cities. Dr. Takagi was at the center of this expansion. He attended the International Atomic Energy Agency (IAEA)’s meeting in Europe in 1986 and also invited many Europeans to Japan to disseminate information on the nuclear situation in their region. Because of increasing networking with the international community for anti-nuclear activities, Dr. Takagi began publishing Nuke Info Tokyo in 1987. Initially, an editing committee consisting of CNIC staff and volunteers was set up and the publication was based mostly on volunteer work. After becoming a CNIC periodical, it continued to offer reliable information on the Japanese nuclear situation for the international community.

Through his will, far-sighted Dr. Takagi has left us three organizations: CNIC, the Takagi School, and the Takagi Fund. In the message he left for his followers entitled My Purpose, he states that CNIC is the first venue to practice the building and development of citizens’ science. The second such venue is the Takagi School for training and instructing the young in citizens’ science. Finally, he expressed his wish to have the Takagi Fund set up for practical purposes. The fund will be used to encourage and foster Japanese and Asian NGOs and individuals. These three operations must be conducted within the concept of “citizens’ science.”

The mission of CNIC is to collect and analyze data and to contribute to the world’s anti-nuclear movement by providing such data in forms applicable to the notion of citizens’ science. We provide such data and information through our monthly Japanese CNIC News and our English bi-monthly Nuke Info Tokyo, as well as through research reports, books, pamphlets, and leaflets. We believe our information can only be useful to the anti-nuclear movement if it is reliable and can withstand scrutiny. CNIC has always made efforts to provide dependable information, and is committed to continue this endeavor.

In his speech at the Right Livelihood Award ceremony in 1997, Dr. Takagi mentioned that “we have just started to write the ending Chapter” of the plutonium story. Now that he has died without completing this chapter, it is the role of those who carry the same spirit as Dr. Takagi to finish this job. Although we are very sad about his death, I feel that his influence is still with us. He has become a star, shining the way for us all. CNIC must make every effort to carry on his work ─ always adhering to the rigorous standards which he demanded. In the meanwhile, we very much hope that you will continue to support our work.