Book Review: Beyond Fukushima~Toward a Post-Nuclear Society by Koichi Hasegawa (translated by Minako Sato) (NIT No. 171) 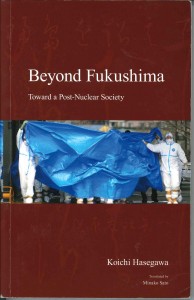 Professor Hasegawa originally wrote this book just after 3.11. He was at his home in Sendai at the time the earthquake struck and like many of us in Japan and around the world, he felt compelled to ‘do something’ in the tragic wake of the disaster, especially the ‘man-made’ disaster of Fukushima Daiichi. He wrote a book. Utilizing 10 years of research work, he penned this book in just two months and it was published in the summer of 2011. This book has now been translated into English, complete with updated information and an extra chapter detailing how the Fukushima nuclear disaster has impacted Japan over the last four years.
Koichi Hasegawa is a professor of sociology at Tohoku University and he provides valuable social perspectives of Fukushima and nuclear energy. The first chapter gives us reasons ‘Why nuclear power generation persists,’ including historic reasons why the US needed Japan, as the only country that had suffered nuclear bombings, to demonstrate the US ‘Atoms for Peace’ policy, by deploying nuclear power plants as a major energy source.
The second chapter focuses on alternatives to nuclear power and includes several examples of overseas countries and regions that have made significant progress in promoting renewable energy projects. The third chapter ‘New Voices from Local Communities’ opens with an account of the successful resident’s movement which prevented the construction of a nuclear power station at Maki in Niigata Prefecture in the late 1990s. It discusses the power of local referendums in preventing nuclear construction as well as various citizen owned renewable energy projects and their impacts on both energy saving and generation as well as community development.
The forth chapter gives a detailed description of how Germany has moved ‘Toward a Post-Nuclear Society,’ contrasting this long process with Naoto Kan’s abrupt and vague statement in July 2011 that Japan should ‘aim at becoming a society that is not dependent on nuclear power.’ The author gives a detailed analysis of how Japan could become nuclear free, offering 3 options, including replacing nuclear energy with thermal generation and the feasibility of renewable energy. He also describes how Japan’s energy decisions will impact other countries in Asia.
The final chapter ‘Japan after the Fukushima disaster’ describes political events and changes that have occurred in the years since 2011, as well as the huge upsurge in public protests against nuclear power in Japan. Despite the massive and vocal public opposition to nuclear power, the government is determined to restart as many nuclear power plants as possible and the author laments the fact that the civil movements have been unable to substantially change government policy. He critiques the new regulatory regime, as well as evacuation plans. He gives six ways that Japan could theoretically move towards a nuclear free future: through legislation, political leadership, administrative authority, local government authority, judicial authority and national or local referendums, but then gives several economic and political reasons why nuclear power generation can’t be stopped.
Hasegawa’s book raises basic questions regarding the modernized technology-centered world we have built and the vast problems it is creating, brought starkly in to focus by the Fukushima disaster. He claims that mere technological fixes will not give us basic solutions to these problems, but we must sincerely reflect on our relationship with nature and how we can coexist rather than just keep trying to conquer it.
Although Hasegawa projects an air of disappointment that Japan hasn’t been able to transform itself as much as he had hoped in the post-Fukushima age, he still offers hope and concrete advice for change.
(Caitlin Stronell, CNIC)