Nuclear Zero Bill Submitted to the Diet
The “Nuclear Zero Bill” drafted by the Constitutional Democratic Party (CDP) of Japan in response to concerns voiced by citizens’ organizations was submitted to the House of Representatives on March 9 by the CDP together with the Communist, Liberal and Social Democratic parties. The Democratic Party did not take part in the submission, but two members who did agree with it joined in.
The bill would have all nuclear power plants in Japan shut down promptly, setting a course for decommissioning, with the necessary procedures performed within five years of the law taking effect. The bill is not expected to pass in the Diet, where the majority of legislators either promote or accept nuclear energy, but Seiji Osaka of the CDP, who heads the Energy Investigation Committee, held a press conference, where he emphasized, “What is important is not just to create legislation, but also to build a national movement.”
Energy Proposals by Foreign Minister’s Advisory Panel
The Advisory Panel of Experts on Climate Change established by Foreign Minister Taro Kono in January and chaired by Takejiro Sueyoshi, Special Advisor to the United Nations Environmental Programme Financial Initiative (UNEP-FI), submitted its proposals on energy to Kono on February 19. The proposals criticized government policies promoting coal-fired energy, saying, “Under criticism from international society, this is beginning to be a bottleneck in Japan’s foreign diplomacy. They called for a shift toward diplomacy that puts a top priority on renewable energy. They also pointed out, “The idea that nuclear or coal-fired energy is needed as a base-load energy source is outdated.”
The proposals cover all aspects of climate change. A summary is due to be released in April.
String of Decisions on Fukushima Nuclear Accident Victims’ Lawsuits
The Tokyo District Court ordered Tokyo Electric Power Co. (TEPCO) on February 7 to pay a total of about 1.1 billion yen to 318 evacuees for “unprecedented damage from long-term evacuation, violating the victims’ freedom of movement and residence” as a result of their forced evacuation from the Odaka district of Minamisoma City, Fukushima Prefecture.
On February 20, the Fukushima District Court ordered TEPCO to pay 15.2 million yen to the surviving family members of a man (then aged 102) from Iitate Village, Fukushima Prefecture, who committed suicide when faced with forced evacuation. There are two prior cases in which judgements have recognized suits seeking compensation for family members of people who committed suicide during evacuation, but this is the first judgement in a case where the suicide occurred before evacuation. The judgement dismissed TEPCO’s assertion that “it was not a suicide caused by the rigors of refugee life,” saying, “Being forced to evacuate was the ultimate trigger for his suicide, caused by anxiety over being unable to live in his home town.”
Judgments were handed down  on March 15 in the Kyoto District Court, March 16 in the Tokyo District Court and March 22 in the Fukushima District Court, Iwaki Branch. In the first two cases, both TEPCO and the national government were ordered to pay plaintiffs additional compensation. Plaintiffs in the Fukushima District Court case, were suing only TEPCO, not the government, but the judgement ordered that TEPCO must pay additional compensation. The ruling stated that, regarding tsunami countermeasures, ‘Even if TEPCO’s awareness was that there was no possibility of mounting   realistic countermeasures, such an extreme lack of rationality cannot be recognized.’ The upper limit of compensation was raised slightly.
The second hearing in the criminal case against three former TEPCO executives, including the former chairman, for criminal liability in the Fukushima nuclear accident (compulsory trial; professional negligence leading to death) was held on January 26 in Tokyo District Court, with witnesses who were employed by TEPCO being questioned. The first hearing, on June 30, 2017, was the arraignment (the three defendants pleaded not guilty) and statement of evidence, and now actual hearings have finally gotten underway. The trial schedule after this is densely packed, so the dates for everything up to the 17th hearing on June 15 have been determined and witnesses will be questioned at each hearing.
Testimony of TEPCO employees at the second hearing and of employees of Tokyo Electric Power Services, a TEPCO subsidiary, at the fourth revealed TEPCO as a company that gave priority to economic concerns and was trying to evade taking tsunami countermeasures.
New Case of Data Falsification
Further to the data falsifications by Kobe Steel reported in this column of NIT No. 181, on February 14, cheating by Kobe Steel’s subsidiary Kobelco Research Institute in its irradiated metal corrosion analysis was revealed. Japan’s Nuclear Regulation Authority (NRA) had entrusted the Japan Atomic Energy Agency (JAEA) with preparing evaluation methods for safety tests with regard to highly radioactive waste disposal. JAEA, in turn, subcontracted this out to Kobe Steel, who passed it along to Kobelco Research Institute.
An outside investigative committee established by Kobe Steel for the above-mentioned investigation of corrosion found mismatches between the original data and the reported figures, and couldn’t even find some of the original data. On February 7, Kobe Steel reported to JAEA that an investigation was in progress. JAEA held a hearing for an explanation from Kobe Steel on the 13th, and reported to the NRA on the 14th. The same day, the NRA and JAEA announced that inappropriate actions may have occurred. 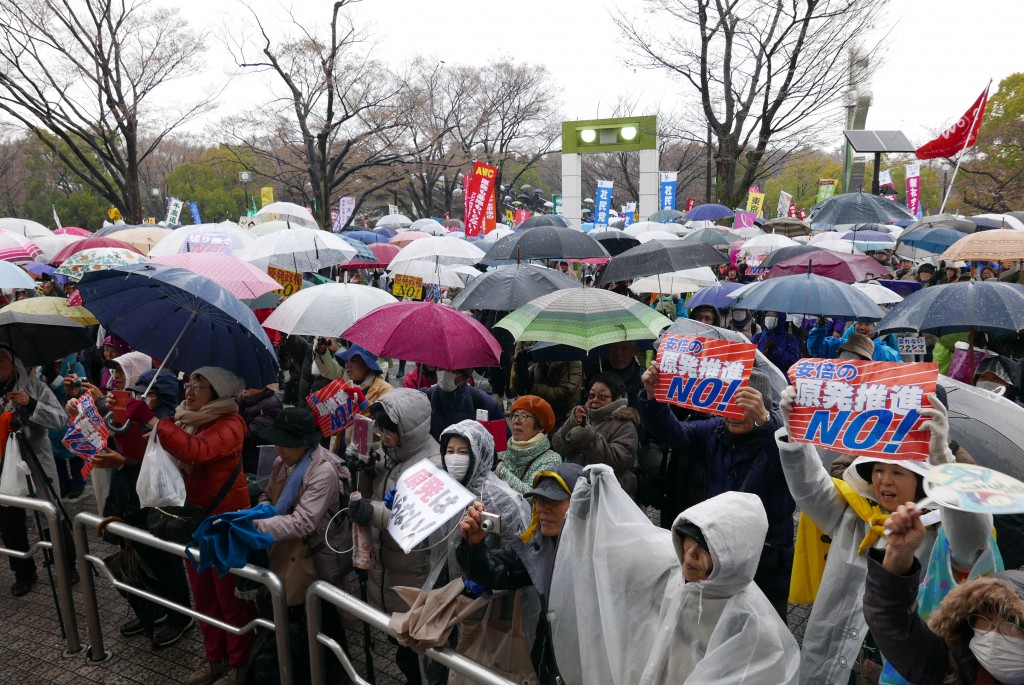 The biannual Goodbye Nukes Rally was held in Yoyogi Park, Tokyo on 21 March. Despite falling snow and freezing temperatures, organizers estimated 12,000 people attended, raising their voices against the government’s continued policy of promoting nuclear power. Speeches from the main stage included nuclear plant worker Arakabu-san who contracted leukemia and is fighting a courtcase against TEPCO to demand compensation, Lee Kyonja, a Korean activist, as well as a Fukushima evacuee, the former mayor of Tokai Village and Diet members. Hiroyuki Kawai, who is on CNIC’s Board of Directors also spoke, representing Genjiren (Promotion of Zero Nuclear Power and Renewable Energy Federation)
<Photo by Ryohei Kataoka, CNIC>