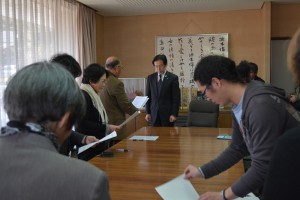 The nuclear plant was defeated but the battle against the interim storage facility continues
It was in February 1977 that a nuclear power plant project was proposed in the former Hikigawa Town (now a part of Shirahama Town) in Wakayama Prefecture, western Japan.  The town council decided to sell a block of town-owned land to Kansai Electric Power Company (KEPCO) at an ad hoc meeting. The town sold 660,000 square meters of mountainous forest land for 1.259 billion yen.
This created a profound controversy in the town. Those in favor of the project and those not in favor entered into an intense confrontation which lasted for 16 years. The town was divided into two, and even families were divided, generating conflicts between parents and children, and among siblings. In 1988, the town elected an anti-nuclear mayor, and the controversy gradually calmed down.
In Wakayama Prefecture there have been five candidate NPP sites, including Hikigawa, but all the projects were defeated by resistance from local populations. However, KEPCO’s Hikigawa NPP siting office has continued to operate, with four employees.
We, local residents against NPPs, have been concerned for more than ten years about the possibility of Hikigawa being selected as an interim nuclear waste storage facility site. However, we were almost convinced that no NPP would be built here because Hikigawa Town merged with neighboring Shirahama Town in 2006 in the course of the great Heisei merger of cities, towns and villages, and because of the Fukushima Daiichi nuclear disaster.
Concerning the issue of interim nuclear waste storage facilities, Governor Issei Nishikawa of Fukui Prefecture, which hosts many KEPCO NPPs along the Japan Sea coast, issued a statement that the prefecture would accept the restart of Ohi NPP units 3 and 4 on condition that interim nuclear waste storage facilities would be built outside the prefecture. The KEPCO president announced the company’s plan to select a facility site in 2018, to start construction in 2020, and to commence operation in 2030. In response to these announcements, Maizuru City and Miyazu City, situated along the Japan Sea shore, as well as the governor of Kyoto Prefecture in which the two cities are located, made it clear that they would not accept interim facilities in the respective municipalities. In Wakayama, located along the Pacific Ocean shore, the prefectural governor and the mayors of towns and cities have already stated that they would not admit high-level radioactive wastes, but the mayor of Shirahama Town  has not ruled out hosting interim storage facilities. KEPCO and associated companies own about 1.2 million m2 of mountainous forest land on the coast in the Hikigawa area of Shirahama Town, and there is a port nearby that appears to be suitable for the transportation of nuclear fuel.
Concerned about such circumstances, residents organized a lecture gathering entitled “Say No to Interim Nuclear Waste Storage Facilities” on January 20 this year, inviting Mr. Hideyuki Koyama from Osaka Citizens Against the Mihama, Ohi and Takahama Nuclear Power Plants (“Mihama-no-Kai”) to speak. We also submitted a formal letter to the mayor of Shirahama Town on February 23, requesting the mayor to announce that the town would not accept the construction of an interim nuclear waste storage facility. Later, on April 16, the members of the Kansai Network Concerned with Evacuation Plans submitted another formal letter of similar content to the mayor. On May 23, No Nukes Wakayama, organized a general meeting in Tanabe City, Wakayama, and decided to launch further actions against the construction of interim nuclear waste storage facilities, specifically by organizing small talks and informative gatherings, and by talking to the town council, the council of area leaders, and various organizations in the town, aiming to expand the movement and stop the project by all available means. We commit ourselves to handing over the beautiful ocean, mountains and rivers safely to our children and grandchildren, and we are determined to make continued efforts to achieve this.
<Kikuo Shimizu, No Nukes Wakayama Representative>