Who’s Who: Ogiso Shigeko, a tough leader in the anti-nuke movement 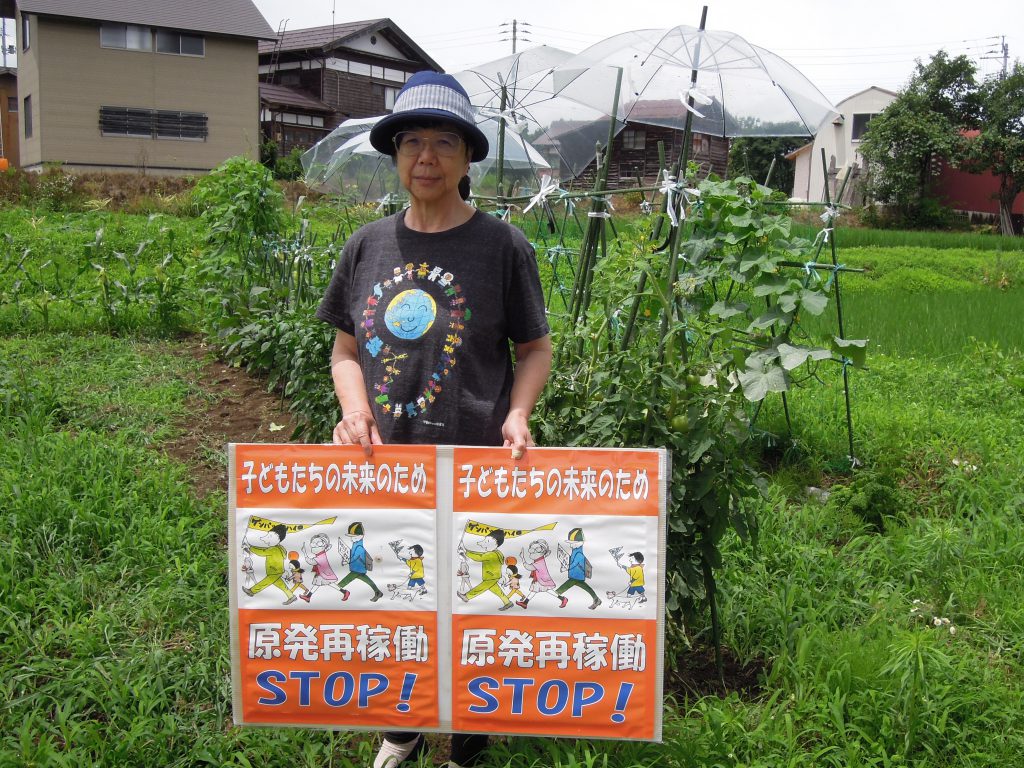 It was shortly after Ogiso Shigeko opened a natural food restaurant, Kakinoki-ya, in the city of Toyohashi, Aichi Prefecture, that the Chernobyl disaster occurred in April 1986. The radioactive particles released from the plant were found to have reached Japan, 8,000 kilometers away from the plant, one week after the calamity. Radiation was detected in the breastmilk of many mothers.

Ogiso’s restaurant, whose sales point was serving natural food, used a great volume of open-field vegetables. She was concerned about impacts from the disaster, and started up study meetings with young mothers who were customers of the restaurant to enhance their knowledge about nuclear plants and radioactivity. She then discovered that the Hamaoka Nuclear Power Plant, run by Chubu Electric Power Company, stood at a distance of only 70 kilometers from her home. She also learned that the Ikata Nuclear Power Plant, located in Shikoku, one of the main islands of Japan, was planning an output adjustment test. The Chernobyl plant was also conducting one of these tests when it exploded. Together with friends, Ogiso participated in the movement demanding the cancellation of the test.

For 35 years since then, Ogiso has been one of the most active figures in Japan’s anti-nuke circles in the post-Chernobyl era.

During the summer 1989 House of Councilors election, Ogiso organized a political party, “People for No Nukes.” As party co-director, she succeeded in putting up ten candidates in the election.

There are ten major electric power suppliers in Japan, each of which formerly monopolized the regions where they are located. Of these, nine companies own nuclear plants (all except Okinawa Electric Power), and there were local anti-nuclear groups in each of the regions. The party established one candidate in each region, according to the recommendation of the local groups (except the Tokyo Electric Power Company (TEPCO) region, where two candidates ran).

The party won no seats, but the efforts concerning the election, led by Ogiso and others, made a significant contribution to the linking up of anti-nuke groups and individuals across the country.

In 1990, Ogiso joined a movement against the construction of nuclear fuel cycle facilities in the village of Rokkasho, Aomori Prefecture, and stayed there for two years. The “Women’s Camp” she participated in was a nonviolent direct action to stop the construction.

In 1992, No Nukes Asia Forum was formed to link anti-nuke movements in eight Asian countries (its first gathering was held in Japan). Ogiso was named co-director of the group.

In 1995, she moved with her partner to the town of Tsunan, Niigata Prefecture, in pursuit of an alternative lifestyle, and joined the movement against the Kashiwazaki-Kariwa Nuclear Power Station, run by TEPCO in the prefecture.

After the TEPCO Fukushima Daiichi NPS disaster in 2011, Ogiso has been continuously committed to activities for preventing nuclear disasters. She was engaged in a balloon survey project, which released many balloons in each season of the year from near the Kashiwazaki-Kariwa NPS, to simulate the spread of radioactive particles in the case of an accident at the site. She collected detailed records, including weather data, of each individual day of release, and issued a report for use as a reference in disaster prevention planning.

In 2019, she became a member of the Tsunan Town assembly, and her first job as an assembly member was to present a statement to the assembly for endorsement. The statement expressed objections to the Japanese Ministry of Environment’s plan of using the soil collected from decontamination work in Fukushima Prefecture to develop farming land across the nation. No other municipal assemblies in Japan were taking such action. The statement was unanimously endorsed. The Ministry later withdrew the plan, after soliciting public opinion.

More details about Ogiso as an activist can be found in Ando Takemasa’s publication, Datsugenpatsu no Undo shi (“History of the Anti-nuke Movement”; in Japanese), published by Iwanami Shoten in 2019.