The water temperature in the containment vessels and the spent fuel pools (SFPs) varies mostly around less than 32oC and no great changes have been seen. The state of releases of Xenon-135 (half-life roughly nine hours), released when uranium fuel undergoes fission is also unchanged and it can therefore be estimated that the state of the reactors is stable. Further, according to an assessment by TEPCO in June 2020, around 14,000 becquerels per hour (Bq/h) of radioactive materials were being released from the buildings (Fig.1).

At the same time, decay heat has fallen greatly with the passage of time, and thus the volume of cooling water injected into the reactors has been reduced (falling from 7-10m3 per hour in May 2011 to 1.4-1.5 m3 per hour in July 2020).

The state of removal of nuclear fuel from the SFPs is summarized in Table 1. Nuclear fuel removal from Unit 4 has been completed. While multiple problems have been experienced with the equipment (fuel handling equipment crane and fuel-handling machine) for removal of spent fuel from Unit 3, removal began on April 15, 2019. (It was originally set to begin around mid-FY2018.)

Work to dismantle the upper section of the Units 1 and 2 exhaust stack, in which a fracture was discovered in a supporting pillar, began on August 1, 2019 and was completed on May 1, 2020. The 120m exhaust stack was dismantled by dividing it into 23 blocks. This work, originally scheduled for completion during FY2019, was delayed by equipment troubles and adverse weather conditions. In addition, the Units 1 and 2 exhaust stack has had a lid placed on it, but as the water level in the exhaust stack drain sump pit is fluctuating, the location of the influx is under investigation.

Changes in the number of workers per day are shown in Fig. 2. As of June 2020, the number was 4,020, roughly half what it was at the peak of 7,450 as of March 2015. At the same time, since problems originating in work mistakes are becoming more frequent at the site, in October 2019 TEPCO carried out an organizational restructuring that included the reassignment of 120 employees who had been working at TEPCO’s head office to Fukushima Daiichi Nuclear Power Station. However, the assignment of employees to the site was not actually increased. The changes in the number of cases of work non-conformance are shown in Fig.3, as reported on the TEPCO website, but there has been no change in the trend and there is concern that a manpower shortage still exists at the site.

Fig. 2: Change in Average Number of Workers (Actual Values) Per Day on Weekdays

Fig. 3: Change in No. of Cases of Non-conformance Discussed at Performance Improvement Meetings 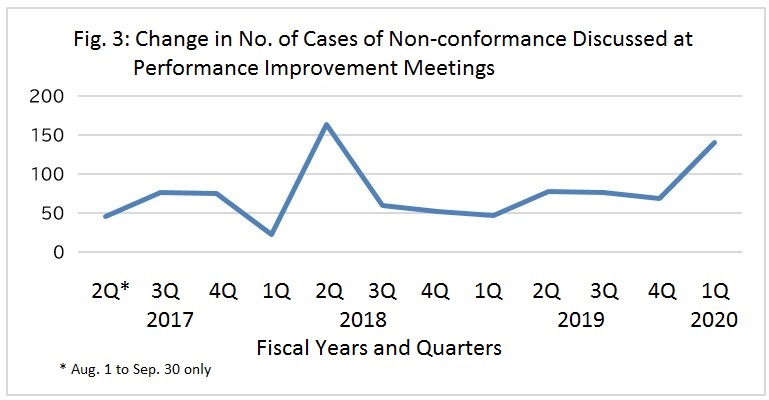 Regarding the reduction of the toxicity of contaminated water, after removal of cesium and strontium and removal of impurities using reverse osmosis (RO), radionuclides other than tritium are removed by the multi-radionuclide removal equipment (ALPS – Advanced Liquid Processing System) and then stored in tanks (containing 1,191,921m3 as of July 23. However, due to past equipment malfunctions and operational policies, in many cases radionuclides other than tritium are present, resulting in only around 28% of the stored water being below the notification concentration). Besides this, water remaining in buildings is roughly 8,830m3, strontium-treated water, etc. is 28,625m3, water treated by RO is 8,096m3, concentrated brine is 500m3, concentrated wastewater is 9,379m3, etc.

Regarding water remaining in buildings related to Units 1 to 4, the floor surface of the waste treatment building (Rw/B) and turbine building (T/B) are now completely exposed, and it is thought that the exposure of the floor surface of the Unit 4 reactor building (R/B) will be achieved in September. With the exception of the reactor buildings of Units 1 to 3 and a number of other buildings, it is hoped that the remaining water will be treated by the end of 2020 (Table 2)

Table 2:  State of Progress Regarding Treatment of Water Remaining in Buildings

Regarding the disposal of contaminated water after ALPS treatment, “Forums to hear the views of stakeholders related to handling of ALPS, etc., treated water” to discuss the report of the Subcommittee on the Handling of Water Processed by ALPS, etc. have been held five times and solicitation of written opinions was carried out between April 6 and July 31. The solicitation of written opinions was due to end on May 15, but the deadline was extended three times. In addition, at the “Forums to hear the views of stakeholders,” fishery operators and forestry organizations expressed their clear opposition to the release of the water into the ocean, and mayors of related municipalities stated that the government should take responsibility for considering the disposal method and take countermeasures against losses stemming from harmful rumors resulting from whatever disposal method should finally be implemented.