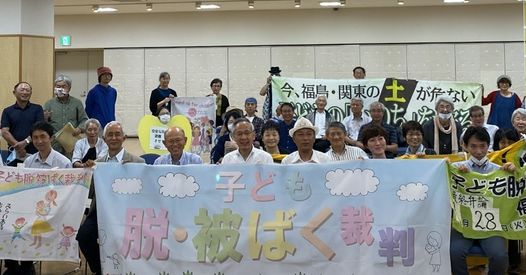 A trial was held from August 2014 in which about 200 plaintiffs—parents and children from Fukushima—filed suit in Fukushima District Court calling to account the governments of Japan, Fukushima Prefecture and the cities and towns in which they were residing at the time of the disaster.

Even after four years had passed since the accident at Tokyo Electric Power Co.’s Fukushima Dai-ichi Nuclear Power Station, neither the national nor prefectural government had implemented policies to eliminate the exposure of children to radiation. Seeking accountability by the national and prefectural governments, about 200 of Fukushima’s parents and children, including evacuees, filed suit in Fukushima District Court in 2014 and 2015.

This is the “Children’s Lawsuit Against Radiation Exposure.”

The lawsuit was filed in Fukushima District Court in August 2014 concluded on July 28, 2020 with closing arguments. We wish to thank the many people who came together from across the nation that day, despite heavy rain and the COVID-19 crisis. Also on that day, a petition that had gathered 3,702 signatures was presented to Fukushima District Court seeking a fair trial, and we wish to thank everyone who contributed to the total of 85,844 signatures that were gathered.

The final total of 86,456 signatures received after the trial’s conclusion were later submitted to Fukushima District Court by representative plaintiff Konno Sumio.

The venue where the plaintiffs and lawyers team were welcomed after presenting the closing arguments overflowed with joy and a great sense of accomplishment that was felt by everyone in reaching the conclusion of the trial. 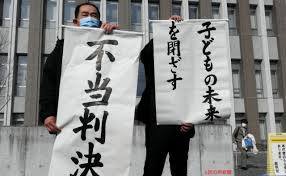 Unfortunately, the verdict in the Children’s Trial Against Radiation Exposure which was handed down on March 1, 2021 brought renewed suffering to the children who had spent the last ten years living with anxiety and their parents who had taken pains to protect their children. The verdict went against the plaintiffs on all counts.

It was natural that the many people involved would express anger toward the court after this verdict was pronounced.

Judge Endo Toru hurriedly read only the main text of his verdict, and then left as if fleeing the rostrum. During the subsequent ten days after the crowd that had gathered at the entrance to Fukushima District Court exploded in tears and anger, many among the once overwhelmed plaintiffs began speaking out, saying that they did not want the fact of the children’s pointless radiation exposure to be swept under the carpet, that adults have a duty to protect children and that this could not be allowed to end this way. Then on March 11, the plaintiffs and their lawyers decided to continue fighting for the Children’s Lawsuit Against Radiation Exposure by filing an appeal with the Sendai High Court.

Even though our voice may be small, as our responsibility to our children and future generations, we are resolved to continue declaring our objection to the way this country is being run.

On March 15, 2021, we filed an appeal against Fukushima District Court’s ruling with the Sendai High Court. We ask for your continued support.