The construction of the Rokkasho Reprocessing Plant was also significantly delayed during the 2010s, and the 2010 plutonium utilization plan was not revised. However, with the completion of the Rokkasho Reprocessing Plant now planned for the first half of FY2022, the Federation of Electric Power Companies of Japan (FEPC) announced, on February 26 this year, plutonium holdings as of the end of 2020 as well as plans to use the new plutonium. 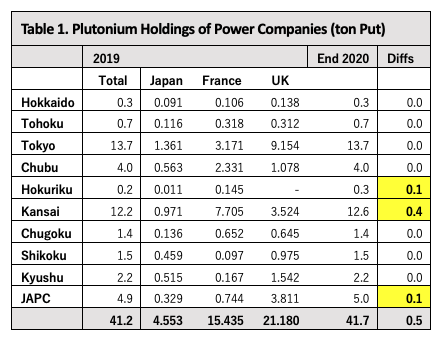 First, let’s take a look at plutonium stocks (Table 1). At the end of 2019, the amount of plutonium held by power companies was 41.2 tons, but by the end of 2020, it had increased to 41.7 tons, an increase of 0.5 tons. No reprocessing is currently conducted in Japan, but reprocessing was previously commissioned to the United Kingdom and France. Both have completed the reprocessing itself, but there was an increase in the amount of plutonium due to administrative allocations in the UK. Further, of the total 41.2 tons of plutonium held in 2019, 15.4 tons were located in France and 21.2 tons in the UK.

Before unraveling the plutonium utilization plan, I need to explain a little about plutonium. When uranium fuel is burned in a nuclear reactor, uranium-235, 3 to 5% of uranium fuel, is struck by the neutrons flying around in the reactor and undergoes nuclear fission. Uranium-238, 95 to 97% of uranium fuel, sometimes absorbs neutrons to become plutonium-238. The plutonium-238 thus produced absorbs more neutrons to produce plutonium-239, 240 and 241. Spent fuel contains around 1% of uranium-235 that did not undergo nuclear fission, 93 to 95% of uranium-238, 1% of various plutonium nuclides, and 3 to 5% of fissile materials such as iodine, cesium, and strontium, released in large quantities during the Fukushima Daiichi Nuclear Power Station accident.

Further, in the past, the maximum plutonium separation capacity of the Rokkasho Reprocessing Plant was said to be 8 tons/year, but this has been reduced to 6.6 tons in recent explanations. (For example, according to an explanation by the Ministry of Economy, Trade and Industry at a meeting of the special committee investigating nuclear issues in the lower house of the Japanese Diet on May 19, 2020.) On the other hand, the Rokkasho Reprocessing Plant’s application states that an annual 7 tons of plutonium will be separated.

Will this plan work? When you look at the names of the nuclear power plants that are lined up in Table 2, not only are many of them unable to restart operations, many are far from passing the new regulatory standards. The Atomic Energy Commission is committed to the operation of the Rokkasho Reprocessing Plant based on this pie in the sky. Japan currently holds 46 tons of plutonium. Shouldn’t we first be considering what to do with this plutonium?

The situation has changed greatly in the last 20 years, but the plutonium program has shown no change at all. If the Rokkasho Reprocessing Plant begins operations and the amount of plutonium Japan holds increases, however, Japan will simply face more issues that will need to be addressed. Just somehow adjusting the old plan to fit the new circumstances, will obviously result in failure. 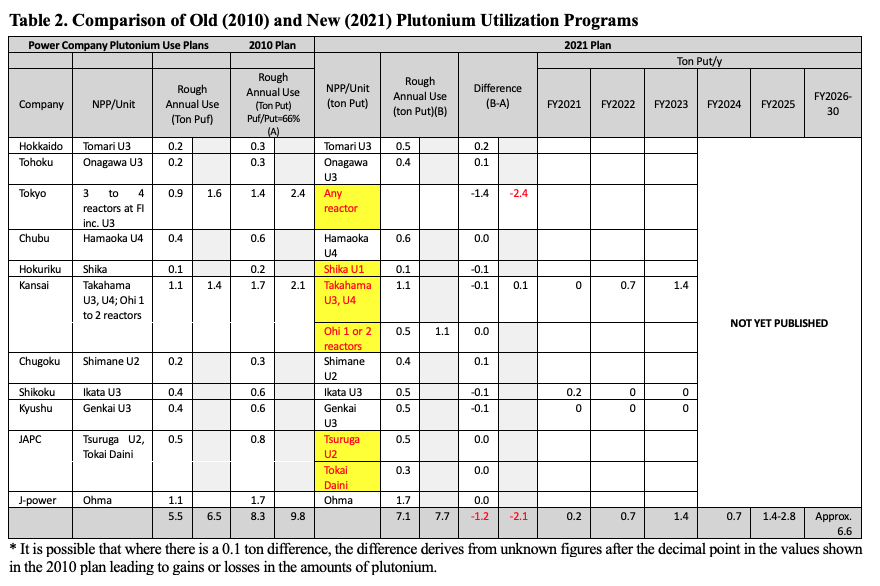