The Basic Act on Energy Policy was enacted in 2002. This lawmaker-initiated legislation was submitted to the Diet by a group centering on Amari Akira, a Liberal Democratic Party member of the House of Representatives. According to an explanation given at the time of the proposal, the intention was to ensure progress in the construction of 14 new nuclear power plants (NPPs) that were planned at the time. Amari was appointed Minister of Economy, Trade and Industry in 2006 and compiled the “nation-building through NPP construction” plan.

Under the Basic Act on Energy Policy, the Minister of Economy, Trade and Industry is to formulate a basic energy policy plan that is to be reported to the Diet. The law stipulates that the views of the Advisory Committee for Natural Resources and Energy on the plan should be heard and the plan reviewed every three years.

The motive for the enactment of the law changed drastically in the wake of the 2011 Fukushima nuclear accident, and moves to construct new NPPs effectively disappeared.

The 5th Strategic Energy Plan prepared in 2018 made no mention of the construction of new NPPs, but the plan did state that nuclear power will account for around 20 to 22% of Japan’s electricity supply in 2030. This was premised on the active promotion of the restart of nuclear reactors shut down in 2011. The plan also mentioned the promotion of reprocessing and plutonium use, as well as the development of new, advanced types of reactors.

A review of the 5th Strategic Energy Plan began in earnest in October 2020, and a draft of the 6th Strategic Energy Plan was essentially finalized at a meeting of the Subcommittee on Basic Policy of the Advisory Committee for Natural Resources and Energy on August 4. The rest was left to the chairperson of the subcommittee and solicitation of public comments began on September 3.

We will focus here on nuclear power. Whether you would want to call it consistency or simple repetition, the phrasing of the draft basic plan is almost identical to the current basic plan, including its sincere reflection on the accident at Tokyo Electric Power Co.’s (TEPCO’s) Fukushima Daiichi Nuclear Power Station (FDNPS). Be that as it may, let’s focus on the danger signals in the text of the draft plan.

The ratio of nuclear power generation to total power generation in FY2030 is said to reach 20 to 22%, maintaining the figures in the current plan. However, by reducing the total amount of electricity generated by just under 10% through energy conservation, three or four fewer NPPs need to be operated. Even so, all those that have passed the new safety regulations or are currently under examination will be restarted, and most of those that have not yet applied will be restarted, and even then, the NPPs would have to generate electricity at a high utilization rate to achieve the 20 to 22% target.

This means that all applications under the new safety regulations will receive a pass mark. So at the same time as saying, “In the case that the Nuclear Regulation Authority (NRA) determines that a nuclear power plant meets the world’s most stringent regulatory standards, we will respect that judgment and proceed with the restart of the nuclear power plant,” they are also saying that there will be “no case where approval fails to be granted.”

On July 27, the Atomic Energy Commission (AEC) released its 2020 edition of the White Paper on Nuclear Energy, in which it expressed “concerns that the pride in safety in having met ‘the world’s toughest standards’ will foment a ‘new safety myth,’” wh-ereas it seems that what AEC really seeks to do is precisely to establish that “new safety myth.”

Here’s what the draft plan text says about restarts. “The industry, including nuclear power operators, will establish a ‘Restart Acceleration Task Force’ as a new collaborative system which will concentrate human resources and knowledge, including outside experts, to promote appropriate and smooth responses to the review of permission for changes to the establishment of and pre-use inspections of NPPs by NRA at Tomari, Shimane, Hamaoka, Higashidori, Shika, Ohma and Tsuruga NPPs, currently under review, as well as the maintenance and improvement of onsite technical capabilities.”

At a regular press conference held on April 16, Ikebe Kazuhiro, Chairperson of the Federation of Electric Power Companies of Japan, announced “the establishment of a new ‘Restart Acceleration Task Force’ to accelerate restarts of NPPs in the run-up toward 2030, and to make industry-wide efforts in the drive for early restarts.” The “Initiative for Continuous Safety Improvements by Operators,” submitted to the Nuclear Power Subcommittee of the Advisory Committee for Natural Resources and Energy on February 25, also explained that, “Current efforts have focused on the sharing of technical information related to conformity assessment, but a new ‘Restart Acceleration Task Force’ is to be established to widen the scope of industry-wide initiatives and cooperation to include those related to overall restart activities, such as pre-use operator inspections and improvements in the capabilities of operators and maintenance personnel, and to deepen current initiatives.”

Thus, restarting reactors is not such an easy thing to do.

Notwithstanding pressure from Liberal Democratic Party and others, and while many members of the Subcommittee on Basic Policy were also in favor of new (both in new NPPs or in existing NPPs) and replacement nuclear reactors (replacing decommissioned reactors in existing NPPs), in the end, mention of these was also forgone in the draft plan. There were plenty of sharp reactions to this, but in a press conference on July 28, the Japan Atomic Industrial Forum President Arai Shiro commented that, “It is my understanding that a policy to make use of nuclear power was indicated.” On the same day, Yamagiwa Daishiro, a Liberal Democratic Party member of the House of Representatives, said in the Denki Shimbun (Electricity Newspaper), “We have declared this time that zero nuclear power will not take place.” This is because the draft plan states, “With regard to nuclear energy, we will strive to secure the trust of the public and, on the basic premise of ensuring safety, will make sustained use [of nuclear power] at the necessary scale.”

The Agency for Natural Resources and Energy wanted at least to say, “sustained use on a certain scale,” but, as reporter Ebuchi Tomohiro wrote in a column titled “Undercurrents” in the Nihon Keizai Shimbun newspaper on May 27, the prime minister’s office and the Komeito Party wished to exercise caution. Nevertheless, the idea of “sustained use” was somehow incorporated into the text. When asked about the need to write in new reactor constructions and replacements, Yamagiwa refuted this by saying, “It would be a problem if they did not state it even though the possibility exists as we move toward 2030, but the restarts are not progressing. The consensus is that we should focus as much as possible on restarts, and then replacements will be necessary after that.”

No to Conditions for Sustained Use

The Strategic Energy Plan draft spells out specific conditions for sustained use, which provides grounds for budget requests. It would be a good idea to stop this through public comments.

Long-term operation is considered to be more realistic than new reactor constructions or replacements. Regarding the wording of the draft, which states, “With a cooperative organization of operators, including NPP makers and others playing a central role, while enhancing maintenance activities, taking measures conducive to aging designs, managing discontinued parts, etc., various issues in carrying out long-term operation while securing safety will be examined in accordance with the roles of both the public and private sectors,” Diet member Yamagiwa said he believed that elimination of the 60-year operation limit “is included in the draft, even though it is not stated explicitly.”

Yamagiwa said that the reason why he believed there was no possibility of new reactor constructions or replacements by 2030 was that the electric power companies were reluctant to go ahead with such schemes since there was no prospect of recouping the costs. The draft thus says, “Nuclear operators are required to maintain a high level of nuclear engineering expertise and human resources, proceed smoothly with the decommissioning of reactors, which will increase in the future, take swift and robust safety measures to meet the strengthening of regulations triggered by the occurrence of the accident at TEPCO’s FDNPS, and contribute to global warming mitigation and a stable baseload power supply. Even in the environment where competition has intensified due to power system reform, the government will therefore continue to consider the nature of the business environment, while also referring to overseas cases, to enable nuclear operators to respond to these issues.”

It would seem that although preferential treatment for the nuclear power industry is not explicitly stated, it is included in the draft.

As has been said in the past, measures for the cleanup of spent fuel and decommissioned reactors are urgent issues.

With regard to waste materials generated by decommissioning, the draft states, “For large-scale equipment that is difficult to dispose of in Japan in an appropriate and rational manner, the necessary export regulations will be reviewed to make it possible to achieve operational results, including transportation, through consignment of disposal to overseas business operators. With regard to clearance materials, from the perspectives of facilitating decommissioning measures and effective use of resources, while further promoting the expansion of locations for recycling, efforts will be made to establish the clearance system in society in anticipation of future free releases.” The draft plan envisions the export of decommissioning waste to be promoted through the revision of export requirements. At present, attention is focused on three types of large-scale equipment (steam generators, feed water superheaters and spent fuel transport containers), and the major premise is that these will be recycled at export destinations. Further, it is also stated that radioactive waste materials generated in the recycling and disposal process may be returned to Japan. One reason given for this overseas recycling is that Japan does not have disposal facilities for this kind of large equipment, but it is more likely that the reason is that Japanese people are strongly opposed to the recycling of such waste materials.

Mentioned in the draft plan as examples of new reactor type development are small modular reactors (SMRs), high-temperature gas-cooled reactors, fast reactors, and nuclear fusion reactors. In particular, SMRs were incorporated into the 5th Strategic Energy Plan, but there is little prospect of these coming onto the Japanese market.

The “Promotion of Strategic Technology Development and Social Implementation as One Part of Industrial, Competition, and Innovation Policies Aimed at Achieving Carbon Neutrality in 2050” contains the following. “The development of new technologies and human resource development will be promoted to drastically improve the safety, reliability, and efficiency of nuclear power use in the future, including the pursuit of reactors with excellent safety characteristics, such as high temperature gas reactors, which have inherent safety characteristics, and which are expected to be used in a wide variety of industries, e.g. hydrogen production. In order to support such efforts, the strengthening of human resources, technology and industrial infrastructure that overcomes the boundaries among industry, academia, and government, including the development of test and research reactors necessary for human resource development and R&D, will be promoted.”

These are the grounds for “eventual new reactor construction and replacement.” However, that this will be nothing more than a fruitless blossom is eloquently indicated in the arguments of many experts regarding small-scale reactors (see for example Arjun Makhijani and M.V. Ramana, “Why Small Modular Nuclear Reactors Won’t Help Counter the Climate Crisis” www.ewg.org/news-insights/news/why-small-modular-nuclear-reactors-wont-help-counter-climate-crisis). 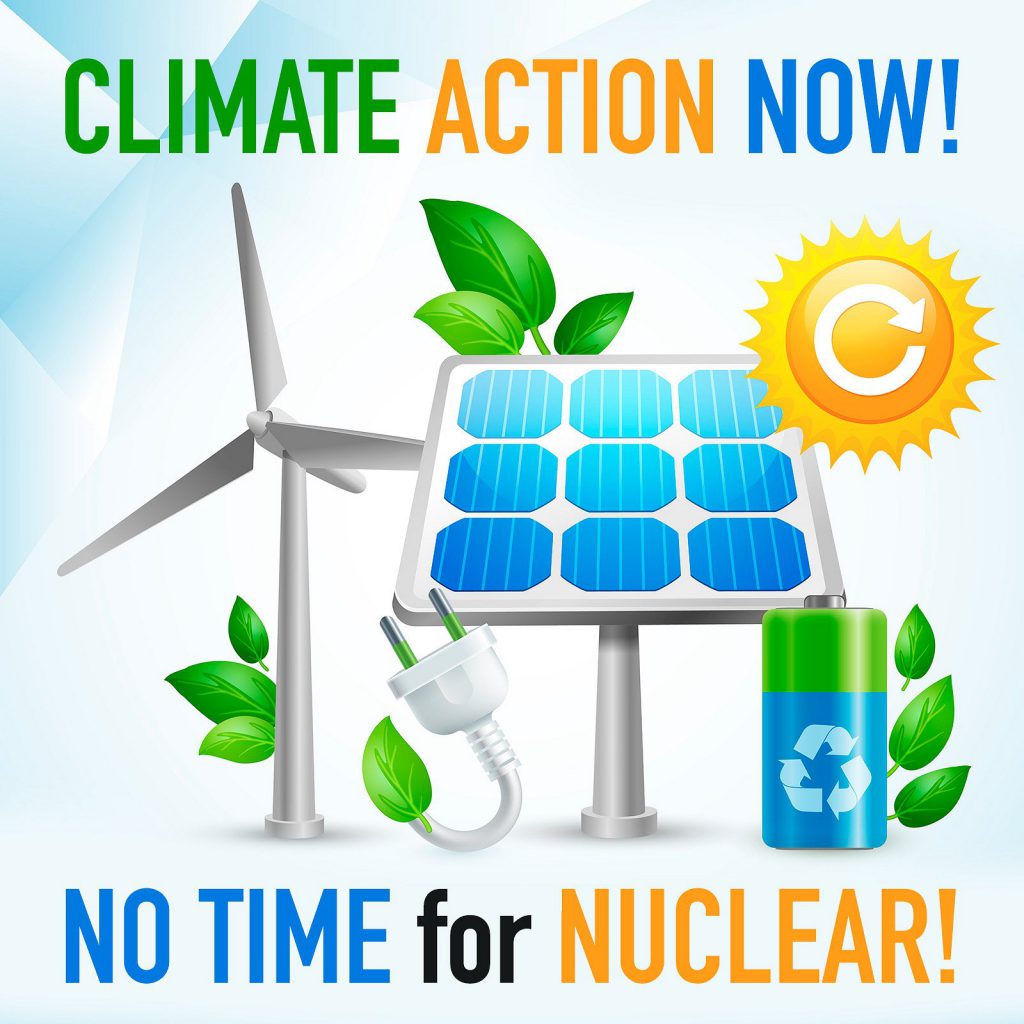