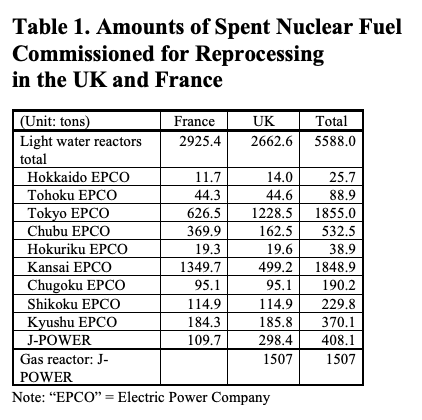 For many years, Japan has commissioned the reprocessing of spent fuel to the United Kingdom and France (Table 1). The reprocessing itself of the commissioned spent fuel has already been completed in both countries. The plutonium extracted by reprocessing is processed into MOX fuel and returned, along with the vitrified waste produced during reprocessing. The plutonium held by France is gradually being sent back as MOX fuel. Meanwhile, although the United Kingdom built a MOX fuel plant, it was shut down due to a series of problems, and as there is no means of transporting the plutonium that has been placed in storage in the UK. 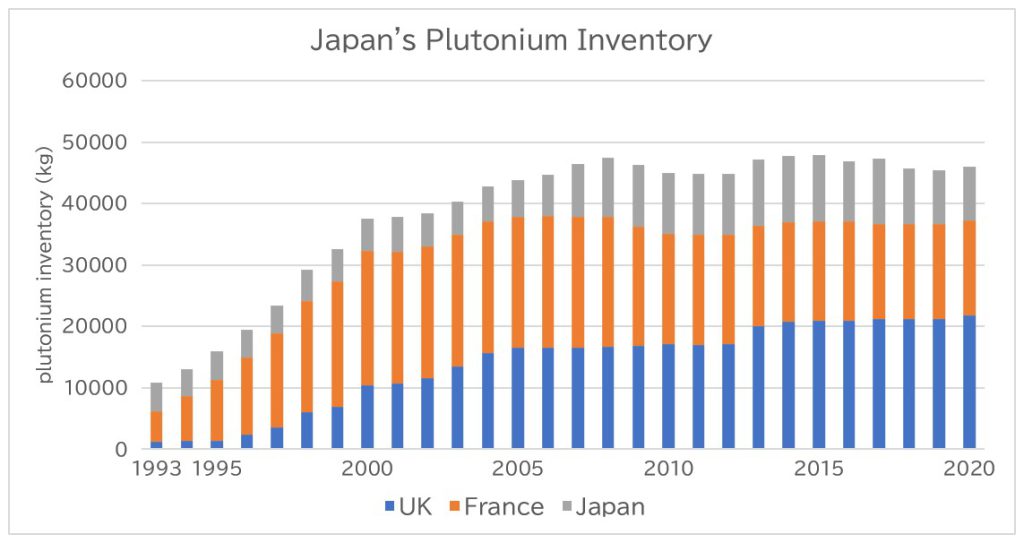 As of the end of December 2020, 21,805 kg of Japanese plutonium were stored in the United Kingdom, 15,411 kg in France, and 8,854 kg in Japan (Figure 1). Plutonium is a material that can be diverted for use in nuclear weapons and is usually subject to strict safeguards, but since both the UK and France hold nuclear weapons, their safeguards are limited. However, as Japan is in the position of responsibility for the management of its plutonium, it is necessary to have firm knowledge of the status of safeguards for plutonium stored in the UK and France.

Nonetheless, in response to the “Letter of Inquiry on the Status of Safeguards for Plutonium Held by Japan Stored in the UK and France” (Osaka Seiji, Member of the House of Representatives, The Constitutional Democratic Party of Japan) submitted in December 2021, the Japanese government’s sense of ownership of the matter is nowhere to be seen. To the following questions concerning safeguards for Japan’s plutonium: (1) Whether the plutonium possessed by the two countries was separately managed; (2) Whether EURATOM (European Atomic Energy Community) and the IAEA (International Atomic Energy Agency) were jointly implementing the safeguards; and (3) How safeguards were being implemented after the UK’s departure from the EU, the response to all the questions was. “The Government of Japan is not in a position to answer these questions.”

In its annual resolution on nuclear disarmament submitted to the UN General Assembly, Japan has urged the international community to take concrete measures to improve transparency and mutual trust for nuclear disarmament. On the other hand, Japan has been promoting a nuclear fuel cycle policy in which plutonium, a material that can be used for the manufacture of nuclear weapons, is extracted from spent fuel and utilized in MOX fuel. The construction of the Japan Nuclear Fuel Ltd. Rokkasho Reprocessing Facility, which will play a central role in the policy, is scheduled to be completed in the first half of FY2022. The Rokkasho Reprocessing Facility will have a reprocessing capacity of extraction of about eight tons of plutonium per year (sufficient to produce 1,000 nuclear weapons, according to the method of calculation used by IAEA). Of the ten nuclear reactors that have now been restarted in Japan, only four have been equipped to use MOX fuel, meaning that annual consumption is a maximum of about two tons.

While stressing the importance of transparency and confidence-building measures, Japan’s stance of not providing definite explanations about its plutonium is clear from the exchange involving the Letter of Inquiry noted above. Japan’s plutonium stockpiles, along with its reprocessing and enrichment technologies, have long been the subject of international concern. Media reports have also made it clear that the US government is concerned about Japan’s ability to develop nuclear weapons. In a survey of experts conducted by the US journal Foreign Affairs, several researchers singled out Japan as the next nuclear power. China and North Korea have also publicly expressed concerns about Japan’s nuclear material storage status, among other matters. There is also evidence that Japan is taking advantage of such concerns. For example, Sato Yukio, who served as ambassador to the United Nations and president of the Japan Institute of International Affairs, wrote in his book (The Umbrella Held Over Us, 2017, Jiji Press) “In conclusion, foreign concerns about Japan’s possible nuclear armament cannot be completely dispelled. Personally, I do not even think it is a bad thing that some concerns remain in the United States. This is because I believe that the main motivation for the United States providing Japan with a nuclear umbrella is to prevent Japan from becoming a nuclear power.” In addition, Japan has announced both in Japan and abroad a policy of reducing its plutonium stockpile (the Atomic Energy Commission adopted the Basic Principles on Japan’s Utilization of Plutonium in 2018). However, what exactly is going to be done has not yet been clarified. For example, while stating that “Japan … will reduce its plutonium stockpile,” the government has yet to reveal the status of its deliberations on how it will dispose of plutonium stored abroad, especially the 22 tons of plutonium stored in the UK that is not expected to be processed into MOX fuel.

Meanwhile, the government has stuck fast to its policy of reprocessing the entire amount of spent fuel that has been generated, and has not relented on its policy of operating the Rokkasho Reprocessing Facility for 40 years to reprocess 32,000 tons of spent fuel. This is despite the fact that, given the restart of nuclear power plants and the situation surrounding MOX fuel-using pluthermal (plutonium+thermal) reactors, it is clear that maintaining this amount of reprocessing will not eliminate the situation in which Japan will continue to hold large stockpiles of plutonium in the long term.

Further, the policy also calls for transporting 731 assemblies of spent nuclear fuel produced by Japan Atomic Energy Agency’s (JAEA) Fugen reactor, now being decommissioned, to reprocessing facilities in France. If reprocessed, the spent fuel will yield 1,329 kilograms of plutonium, but it is not clear how this will be used. There is also a plan to reprocess 530 assemblies of spent nuclear fuel from the fast breeder reactor Monju at some point in the future. In this way, it can be said that Japan is behaving extremely irresponsibly. In such a situation, it would not be surprising to hear opinions from other countries that Japan has been deliberately ambiguous about its intention to maintain an economically irrational reprocessing policy.

Japan has been urging other countries to improve transparency and mutual trust with respect to nuclear issues, but this has led to doubts about Japan’s true intentions. The Nuclear Non-Proliferation Treaty Review Conference scheduled for January this year has been postponed for the fourth time due to the spread of COVID-19. The meeting will be held in August, but having urged the importance of transparency and confidence-building, from the viewpoint of enhancing the transparency and confidence-building regarding its own plutonium, the Japanese government should announce an indefinite postponement of the operation of the Rokkasho Reprocessing Facility and clarify the status of safeguards for Japan’s plutonium stored in the UK and France.