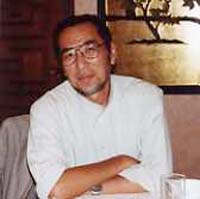 Not many people devote half their life to writing a single book. Life is too short to operate on that basis. Most writers are like butterflies, flitting from one flower to the next.This year Hiromitsu Toyosaki completed his book “Marshall Islands: Nuclear Century”. It is a mammoth 1,262 pages in Japanese. He started it when he was 31 and it took him 28 years to complete. One is filled with admiration at his will power and persistence. Many people continue to write about their memories of Hiroshima and Nagasaki, but, as the title suggests, ‘Hiroshima’ is not the main theme of this book. Indeed, most of the people who are the subject of this book are not Japanese at all. They are the hibakusha1 scattered all over the world.

What was it that drove him to write such a book? I believe it was because he heard the cries of the hibakusha. Their faint, but intense voices reached his ears and he was unable to ignore them. Or rather, he set out on his long journey to find out about the world of the post-Hiroshima hibakusha in order to assuage the discomfort that their voices aroused in him. He wanted to show the world the hideous truth that lay behind the euphemistic theory of ‘arms control’, namely the nuclear north-south problem.

He began collecting information in 1978 about the hibakusha from the Bikini Atoll nuclear tests. Twenty years after the nuclear tests people were still suffering as a result of residual radioactivity. This information had a deep impact on him. His course was set by the new surprises he received at a meeting held two years later in Washington DC. The meeting was convened by citizens’ groups in 1980 and was called the Citizens’ Hearings for Radiation Victims in Washington. The testimonies that he heard there resonated deeply for him. There were testimonies from people who became radiation victims at all stages of the nuclear development process: from nuclear veterans, from victims of nuclear tests, from uranium miners, workers in factories producing nuclear weapons and people working at nuclear power plants, and also from indigenous people – American Indians and Inuit.

Hiromitsu Toyosaki’s book traces his journey from its beginnings in the Marshall Islands, right up to the North Pole and down to the ‘Great South Land’, the land of the Australian Aborigines. He is a journalist and as such his gaze is always at ground level (though few Japanese are as tall as he is). Unlike international political scientists, he doesn’t look down from above. He listens to the stories of the old people, researches the current situation and records the damage caused by the nuclear industry. One important aspect of his work is that he doesn’t simply compile hibakusha witness accounts. He presents the whole picture, checking carefully against official documents obtained under Freedom of Information Law. The combination of the diachronic description provided by official documents with the synchronic perspective provided by hibakusha testimonies makes for a persuasive chronicle of the nuclear age. This book is a very appropriate offering for the 60th anniversary of the bombing of Hiroshima.