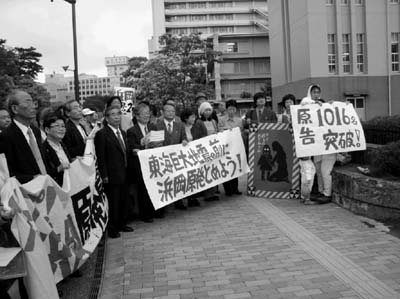 The first reactor at Chubu Electric Power Company’s Hamaoka Nuclear Power Plant (NPP) in Omaezaki City, Shizuoka Prefecture, commenced operations in 1976. There are now five reactors at the plant. From the beginning there were people who warned of the dangers of nuclear power, but particularly after the Chernobyl accident many people began to feel uneasy about nuclear power and small groups of concerned citizens became active throughout Shizuoka Prefecture. However, the groups were not very influential and they found it very difficult to appeal to the general public. More recently there have been several accidents and problems at the plant. For example, in one very dangerous incident two recirculation pumps stopped working.

In this context, several citizens’ groups banded together to form the Shizuoka Network of Citizens Opposed to the Hamaoka NPP. The network focuses on the question of whether the Hamaoka NPP is capable of withstanding the widely predicted 1. The epicenter of this earthquake is predicted to be directly beneath Shizuoka Prefecture. Great Tokai Earthquakes of magnitude 8 and above have hit the Tokai region repeatedly, coming in 100-150 year cycles. Now at last researchers have begun to understand the mechanism of these earthquakes. However, when the Hamaoka NPP was constructed these earthquakes were not well understood and the risk was grossly underestimated. Consequently, doubts have arisen about the capacity of the Hamaoka NPP to withstand a major earthquake. Hamaoka is the only NPP in the world situated directly above the predicted epicenter of a major earthquake. This represents an unparalleled danger. If, amidst the widespread destruction caused by a major earthquake, a catastrophic accident were to occur at the Hamaoka NPP, the fallout would not be restricted to Shizuoka. It would be global in scale.

The network has 300 members, but many of them are busy with work and family commitments. Effectively about ten members are able to devote a lot of time to this issue. As a result of the public lectures and other events that we have held and our lobbying of local government, many people who were previously uninterested have come to recognize the problem. However nuclear power is government policy, so it is not easy to stop. Since the last Tokai Earthquake, 150 years have passed. The next one could strike tomorrow. Aware of this imminent danger, we decided to launch a court case. We want the Hamaoka NPP to be stopped, even if operations are only suspended until the next earthquake has passed. We have obtained 2,200 supporters from all around Japan and are currently fighting in court for operation of the plant to be terminated.

We would be very glad if voices calling for the termination of the Hamaoka NPP were heard not just from within Japan, but from all over the world. So please tellShizuoka Prefecture and Chubu Electric Power Company that the Hamaoka NPP should be closed down.

1. The Tokai region is on the Pacific coast of Honshu. It can be roughly thought of as including Shizuoka, Aichi and Mie Prefectures.

* Chiyoko Tsukamoto is a member of the Shizuoka Network of Citizens Opposed to the Hamaoka Nuclear Power Plant.