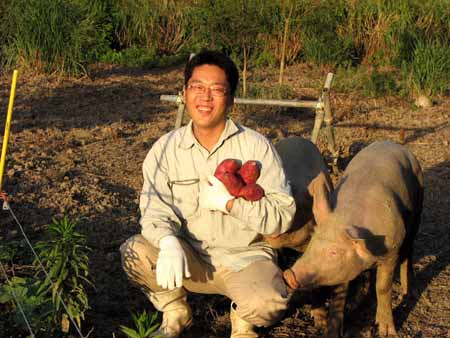 It is planned that a nuclear power plant will be constructed in the middle of the Seto Inland Sea National Park. Takashi Yamato (30) lives on the island of Iwaishima, 3.6 km off the coast from the proposed site.Takashi’s father, Sadao Yamato, is at the center of the movement against the nuclear power plant. He is a former leader of the Iwaishima fishing cooperative. Perhaps it was because Takashi grew up watching his father giving everything he had to this bitter 26-year-long struggle, but eight years ago, after graduating from university, he returned home from Osaka. He took up farming the orchard of his ancestors, found a partner who shares his ideals and became a key person in the struggle against the nuclear power plant.

Thanks to the Kuroshio Current from the Bungo Channel, the 580 inhabitants of Iwaishima are able to get by perfectly well on the island’s abundant seafood and agricultural produce. They don’t need a nuclear power plant. Especially in June, the branches of the organically grown loquat trees which cover the mountains are laden with big sweet fruit. The loquat leaves are used to make a healthy herb tea. They say it keeps the doctor away.

Because of the warm climate, sweet potatoes, Chinese radish (which is cut into strips and dried) and hijiki seaweed in early spring all come earlier than on the mainland. Takashi markets these, along with the fishing cooperative’s seafood, on a web site that he set up himself. His web site doesn’t just cover the island’s produce and the campaign against the nuclear power plant. It also promotes local events and attractions, serving as a medium of exchange between the island and the outside world.

As part of last year’s campaign, Takashi stood as a candidate in the mayoral election. Having been domesticated for 25 years by Chugoku Electric Power Company, 60% of the residents of Kaminoseki Town have become spungers. Takashi called for reform and independence in a town where politics is smeared with money and vested interest. Unfortunately, he was not elected. However, he did not lose his strong determination. He continues to bring in other people who have returned to the island and share ideas with them. He perseveres under the motto “let’s become a first rate country town”.

On June 17 this year, Chugoku Electric submitted an application to Yamaguchi Prefecture for permission to reclaim public sea area with 140,000 m3 of landfill. If there are no inconsistencies in the documents, the governor is expected to give his permission soon. For Iwaishima this is a life or death issue. Even though the Iwaishima fishermen have not sold their fishing rights, their fisheries will be destroyed. The reputation of the island’s seafood and agricultural produce will be damaged and they will be unable to sell them. The number of city people coming for holidays will fall. This is the future that they see before them.

The area that will be reclaimed is internationally acclaimed for its biodiversity. For us to find a way to fight the monster of “government policy” and protect this precious area, we will need strong leadership from our brave young warrior, Takashi Yamato.