The man whose body was destroyed from the inside out

NHK (Japan Broadcasting Corporation) has produced an important contribution to the English literature on the criticality accident, which occurred at the JCO nuclear fuel processing facility in Tokaimura, about 110 km north-east of Tokyo. The September 30, 1999 accident killed two workers and destroyed the “nuclear safety myth” propagated by the Japanese government and the nuclear industry. 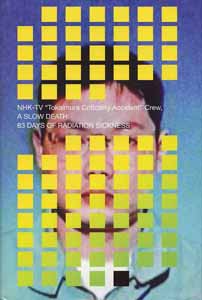 A Slow Death: 83 Days of Radiation Sickness is a translation of a Japanese book based on an NHK television documentary. The documentary was aired in May 2001 and subsequently won the Gold Nymph Award at the 42nd Monte Carlo Television Festival in 2001. It gives only a rudimentary account of the accident itself, choosing instead to focus on the medical treatment and slow death of one of the workers involved. Hisashi Ouchi died almost 3 months after receiving a massive radiation dose of about 20 Sieverts. The mortality rate for patients exposed to levels exceeding 8 Sieverts is considered to be 100%.

Ouchi was exposed while pouring uranyl-nitrate solution from a bucket into a tank, as instructed by his superiors, but in complete breach of approved procedures. The solution suddenly went critical, releasing a burst of neutrons that penetrated the bodies of the workers and the walls of the JCO facility itself. A Slow Death exposes the unpreparedness of authorities to deal with such an accident and recounts the impromptu response of a hastily cobbled together medical team to the unprecedented challenges presented by Ouchi’s case.

The book will be of interest to anyone who wishes to understand the impact of radiation on the human body. The language is highly accessible to lay people, but there is also plenty of detail to fascinate medical professionals and radiation researchers. For example, a discussion about whether chromosome damage discovered in cells transplanted from Ouchi’s sister was caused by the so-called “bystander effect” (p. 63-64) will provide grist for the mill for proponents of this theory.

A Slow Death provides a moving and thought-provoking presentation of the responses of Ouchi (who was able to communicate verbally for the first ten days), his family and the medical professionals who looked after him. It raises difficult questions about the wisdom and ethics of continuing to treat Ouchi for so long. Like the nurses who attended him, no doubt each reader will form different conclusions. However, for this reader it was either an appalling failure of medical decision-making processes, or a grossly inhumane case of scientific inquisitiveness. Probably it was both.

After suffering patiently for a week, Ouchi suddenly cracked. “I can’t take it any more. … I am not guinea pig”. (p.52) His words shocked the physicians and nurses in charge of his treatment. Was this the time to shift the focus from cure to palliative care? Even if a case could be made for persevering a bit longer, what purpose could possibly have been served by resuscitating him on the 59th day, after his heart stopped three times for a total of 49 minutes? (p.92-95) This was a man whose chromosomes had been destroyed. “[N]one of Ouchi’s chromosomes could be identified or arranged in order.”(p.38) Ouchi’s body was destroyed from the inside out. (p.122) It was a slow, painful and presumably unpreventable death. Surely the doctors should have been able to recognize very early that he could not be saved.

The narrative of A Slow Death is compelling and the translation is very readable. There are some rather strange choices of phraseology, mainly arising from excessively literal translation of Japanese expressions, but it is fluent and the medical details appear to this non-expert reader to be accurate. It is a valuable addition to the record of radiation exposure resulting from nuclear-related accidents.