Even now, the level of public awareness in Japan of ‘nuclear fusion energy’ is very low. However the government and people in the field are continuing their steady behind-the-scenes moves to make sure that their efforts to promote nuclear fusion succeed. This they do instead of providing accurate information to the public. This article reports on some important details that have come to light recently.

2. Their strategy: priority is ‘S’

On 17 October the Council for Science and Technology Policy, Cabinet Office announced the 2004 Budget priorities for science and technology. These relate to the major policies included in the draft estimates and are ranked in four levels based on the level of priority. The Council for Science and Technology Policy was established in 2001 to complement the Prime Minister and Cabinet. Its role is to take a broad view of Japan’s overall science and technology and to undertake comprehensive planning and coordination from a position one level above the ministries. Consequently, rankings assigned here hold a great deal of significance for researchers in related fields.

This time it says of the Ministry of Education, Culture, Sports, Science and Technology’s ITER (International Thermonuclear Experimental Reactor) that ‘nuclear fusion is of great significance as a means of securing future energy sources and that it is a long-term research issue’. It assigns it the highest ranking, ‘S’. The amount demanded is 858.8 billion yen, a huge increase compared to the previous year’s budget of 55 billion yen. ‘S’ is defined as ‘specially important policies which should be vigorously implemented’. This time they represent 16% of all items.

Developments regarding the siting of ITER

However, it was no easy task for proponents of nuclear fusion to obtain an ‘S’ ranking. The fact is that in January the Nuclear Fusion Working Group, located in the Ministry of Education, Culture, Sports, Science and Technology (MEXT), intending to site ITER in Japan, put together a report stating that national research into nuclear fusion should be prioritized. This was reflected in the 2004 draft budget estimates. The Report says that ITER, JT-60 (Japan Atomic Energy Research Institute), LHD (National Institute for Fusion Science) and Gekkou-XII (Osaka University) should all be prioritized and that all other university research facilities should be eliminated. It’s fair to say that they have begun to genuinely think about ITER, but with big science, research loses its flexibility and original purity of spirit.

Regarding the ITER project, at the end of January this year the US returned once again to the project and in June South Korea announced that it would participate. (Current participants are the US, South Korea, China, the EU, Canada and Japan.) This was good news for the participants, because the burden of the construction costs decreased as a result.

Those who put their names forward to host the facility were Japan, Canada and the EU, but MEXT’s Nuclear Fusion Development Office made a prediction (Tokyo Shimbun 4 November). Judging from the amount of funds contributed, MEXT concluded that Canada wasn’t a serious contender, so it was down to a one-on-one battle with the EU. At the time, the EU had not yet decided between a proposed site in France and another in Spain. MEXT predicted that if the EU chose France the US would support Japan, due to the fact that France opposed the war on Iraq, but if it chose Spain, which consistently supported the war, the US could go either way. As it turns out, the EU chose the Cadarache site in France.

A ministerial level conference was held on December 20 and 21 (Japan Standard Time) to decide the construction cost of ITER. According to media reports, a decision was deferred because Russia and China supported the EU, whereas the United States and South Korea backed Japan. MEXT’s prediction wasn’t far from the mark it would seem. Those supporting the EU pointed out that Japan has high labor costs and electricity prices, and that earthquakes are also a cause for concern.

The next conference is planned for February. Japan has suggested that it might be willing to consider a compromise in which the project would be shared between the two countries. The actual reactor could be located in one country, while an information center could be located in the other. Whichever way the decision goes, however, it is clear that the ITER project is not only an energy problem. It is a political problem.

The government is also making preparations for a time after ITER. This can be seen in the Proposal to Accelerate the Implementation of Nuclear Fusion (figure 1). Their idea is that, in order to prevent global warming and at the same time contribute to economic development, genuine market investment by, at the latest, 2050 is desirable.

In other words, even before they have conducted any real ITER experiments, they are already beginning to plan for the next phase reactor. Moreover they are trying to conflate that reactor into the prototype and the demonstration reactors. The physical behavior of the burning plasma that is created by ITER is completely unclear, so any plan to begin design at this stage is very rash. What they are trying to do is to generate electricity as early as possible and get some public recognition for it. However, based on the size of ITER, a demonstration reactor would need to have a power output of 2-3GW, 4-6 times that of ITER.

These aren’t the only plans to bring nuclear fusion into society. Studies about adapting nuclear fusion for a hydrogen-based society are also beginning. There has been research into making hydrogen from nuclear fusion since the 1970s. However now, as moves towards a hydrogen energy society centered on fuel cells gather strength, these investigations are being recommenced. If it really proceeds in this direction it will become a formidable plan indeed.

The reason for this is that a true hydrogen market will be larger than the electricity market (because it can be applied to transport as well as electricity); it will be a global market (light water reactor policies are different in each country); and there is the possibility that it will require a centralized heat source (in that case electrolysis using renewable energy would be insufficient). Of course, this is assuming that a hydrogen-based society really begins and that nuclear fusion is implemented.

3. The hard reality: not everything is plain sailing for promoters.

In March, Masatoshi Koshiba, a Nobel Physics Prize laureate, and Akira Hasegawa, former Chairperson of the Division of Plasma Physics in the American Physical Society , submitted a joint petition to the Prime Minister and related Ministers calling for reconsideration of the proposal to site the ITER in Japan. According to them, as much as 2kg of the hazardous substance tritium will be stored as fuel and 40,000 tons of radioactive waste will be generated, so even if experiments are successful, it won’t be accepted by the public.

Indeed, even the manufacturers don’t seem to be very enthusiastic about nuclear fusion. One person from Hitachi’s nuclear energy project section expressed an honest view at the Cabinet Committee to Investigate Basic Issues Associated with Nuclear Fusion Research and Development. He/She would cooperate as much as possible with development being promoted as part of a national project, but isn’t considering it as a future business area. The reasons given for this were that, compared with light water reactors, reactor structure and control of the power output of the fusion reactor being envisaged would be more complex, the materials to be used and the surrounding equipment would be more expensive and more various, and power would be necessary for the facility and for start-up power. As if there weren’t enough problems controlling light water reactors, there will be even more problems with fusion reactors.

Another big problem is that even though the level of radiation in the reactor core will be very high, machinery inside the reactor core will have to be changed regularly. Exchange of machinery by remote control is envisaged. However hardly any technological development for this has been undertaken. If a problem arises, there will be no alternative but for somebody to enter that dangerous place. There is no way that nuclear fusion can be called the crystallization of leading-edge technology.

In contrast with the past, the proponents of nuclear fusion are to some extent attempting to come to grips with the social circumstances. Until now they have taken the optimistic view that if they simply built a nuclear fusion reactor, society would accept it. Now they are sensing the need to make an effort to gain the acceptance of society. Even greater vigilance will be necessary in future.

Figure 1. Proposal to Accelerate the Implementation of Nuclear Fusion 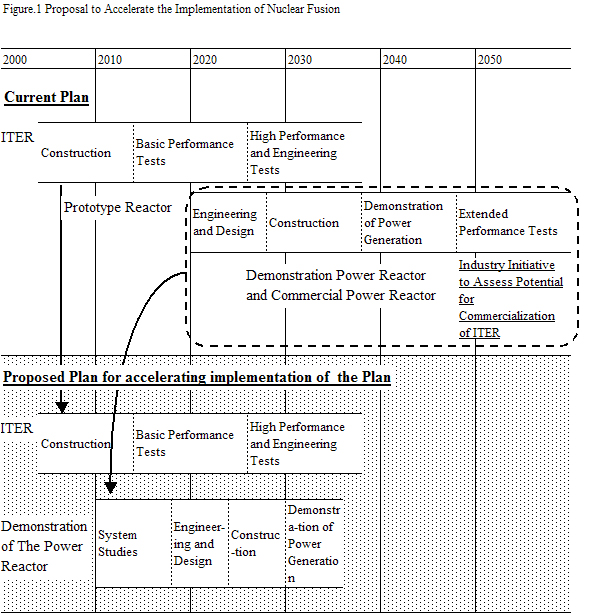