The chemical tests at Rokkasho have been completed and the uranium testing phase is scheduled to begin in April. However, even among the proponents of nuclear energy, calls for a moratorium have emerged. For example, the Young Nuclear Engineers Study Group is one such group They propose a two year moratorium, during which time an overall assessment of the policy should be conducted. Their opinion was scheduled to appear in the trade journal Genshiryoku Eye (Nuclear Viewpoints), but the paper rejected the article.

Against this background, having organized a ‘One Million Signature Campaign’, the Japan Congress Against A- and H-Bombs (Gensuikin) and the Citizens’ Nuclear Information Center (CNIC), both of which assert the need to rethink the nuclear fuel cycle policy, succeeded in pressuring the Atomic Energy Commission (AEC) into organizing a symposium in Aomori City on October 11th under the title Open Debate: Rethinking Reprocessing and the Nuclear Fuel Cycle. The debate was co-hosted by these three organizations.

It was the first time that such an event had been organized in this manner. Drawing about 460 participants the event received widespread attention. The participants from the government side were: Mr. Tetsuya Endo (AEC Chairperson’s Representative), Ms. Noriko Kimoto, Mr. Tetsuo Takeuchi, Mr. Akio Morishima (all Commission members) and Mr. Shunsuke Kondo – five participants in all.

A brief impression of the debate would be that, although it was an open debate, AEC didn’t give much away. They were unable to give up front responses to questions that arose during the debate, such as the problem of the cost and the issue of plutonium supply and demand. Getting through the debate with bland statements, presenting only the semblance of ‘direct discussion with the citizens’, is a pretty meaningless exercise. No doubt the audience picked this up too.

The arguments presented by each side regarding some of the main points of discussion are summarized below.

AEC’s explanation was presented by Commissioner Morishima. The basic gist was that by 2030 energy demand will rise to 160% of what it is today. This is because of increased demand from China and India.

According to this argument, it follows that, from the perspective of energy security, nuclear energy must be pursued. Nuclear energy represents 13% of Japan’s energy supply. Moreover, under the Kyoto Protocol Japan has undertaken to reduce its CO2 emissions by 6% compared to the 1990 level. Expansion of nuclear energy is factored into this figure. New sources of energy are important, but they aren’t a replacement for nuclear energy.

By reprocessing spent fuel, the plutonium extracted can be used and energy consumption reduced. The cycle is incomplete for the time being, but the intention is to use the plutonium in light water reactors. Even so, uranium consumption can be reduced to some extent. Also, by reprocessing, the quantity of high level waste can be reduced. It’s a little expensive, but if in the long term uranium prices rise, this situation will change.

The gist of Mr Nishio’s presentation was that AEC’s reprocessing policy is rigid in regard to its direct connection to the objective of developing a Fast Breeder Reactor Cycle. There is absolutely no rush to make Rokkasho operational. There is no prospect of turning the Fast Breeder Reactor Cycle into a reality, so a far more sound energy policy would be, instead of pouring money down that drain, to develop existing energy saving and distributed energy technologies.

Mr Asaishi’s argument was that there is already too much plutonium. The notion that by going steadily forward this problem will go away is nothing but wishful thinking. Even if Rokkasho becomes operational, it won’t be profitable, so it would be better to withdraw now.

Spent fuel should be disposed of as is. Once uranium tests begin, the plant will be irreversibly contaminated with radiation. In that case, the 2.6 trillion yen cost of decommissioning the reprocessing plant will be passed onto future generations.

Which is preferable, to begin full-scale operation, or to conduct a truly open public debate, based on the principle of freedom of information? 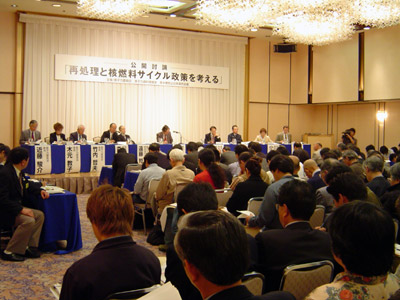 Participants at the ‘Open Debate: Rethinking Reprocessing and the Nuclear Fuel Cycle’ held in Aomori on October 11th.