A leak from the Spent Fuel Storage Pool which occurred in Spring 2001 was discussed in NIT No.95 (May/June 2003). Since then Japan Nuclear Fuel Ltd (JNFL) has continued its attempts to identify the cause and the places from whence the leaks came and a report was produced in August last year. According to JNFL, holes which went right through the Spent Fuel Storage Pool liner were found in six places and faulty welding was identified in 291 places.

Faulty work was found not only in the Spent Fuel Storage Pool. It was also present in liquid holding vessels for all sorts of solutions within the factory itself. Of these, one hole penetrated right through and there were 57 examples of faulty work. Again associated with faulty welding, there were around 100 instances of metal fittings that had been severed. The fittings in question are metal plates embedded in the concrete that supports the fuel racks.

JNFL has announced that it will redo all the faulty welds where leaking has actually occurred, as well as all the welds where leaking could possibly occur in the liners of both the Spent Fuel Storage Pool and of the vessels. However there is no guarantee that this repair work will actually ensure the safety of the facility.

One direct cause that can be identified for the faulty work is that the construction time was extremely short. Despite the fact that the total length of welds in the Rokkasho Spent Fuel Storage Pool are 6 times that of a nuclear reactor, the time allotted for the work was about the same as that for a reactor. It represents a complete failure of control of the construction process. The reason for this is that, due to the fact that Japan’s nuclear power plants have only small storage pools for their spent fuel, in several plants there was a possibility that they would run into trouble when exchanging fuel, so the work at Rokkasho was rushed. On top of this, when JNFL took over the facility from the construction companies, it only carried out checks selectively.

It speaks volumes for the flaws in JNFL’s quality assurance system that it could fail to notice such huge construction faults.

Chemical tests of the factory itself were completed at the end of December 2003. These tests were carried out at nine of the ten buildings and 307 defects were identified. No tests were conducted at the Vitrification Building. (In an earlier test using water and steam 1000 defects were found.) In the Dissolver several thermometers, very significant instruments from the point of view of safety, were incorrectly positioned. The Dissolver was installed in 2001 and a test was carried out by flushing water through, but this problem wasn’t discovered until the chemical tests in 2003. These defects were fixed and tests were carried out again.

The correction of defects has not been completed in the following two areas: (1) modification of the pipes used in the extraction of concentrated solutions from the Solvent Distillation Column in the 2nd Acid Recovery System (this is scheduled to be retested before the uranium tests begin); and (2) a problem with the software which controls a locking valve related to protection against criticality accidents. This is a big problem. They say it will be fixed and retested before ‘active testing’ begins. Tests using spent fuel are planned, but it appears that there are lots of problems with the safety of the whole facility and with the quality assurance process. No doubt the defects of the inspection arrangements of the Agency for Nuclear and Industrial Safety, the organization with responsibility for giving the final approval for the storage pool, will also be called into question.

JNFL has lost the public’s trust as result of the leak from the spent fuel storage pool. The response of both Aomori Prefecture and the central government to JNFL’s quality assurance failures has been to set up investigation committees focusing on this problem. It is necessary, especially for the regional government of Aomori Prefecture, to sign a new safety agreement before the uranium tests begin. Until the results of the debates of the investigation committees emerge, JNFL can’t begin the uranium tests at the reprocessing plant. Furthermore, because it has become clear that the work to fix the leakage problem will take several months, in September JNFL announced that it would defer the commencement of operations at the Rokkasho Reprocessing Plant by one year to July 2006. This is the seventh postponement and the original plan to commence operations in 1995 has been delayed by 11 years. However the chances of JNFL running to time, even under this new schedule, are remote.

The Governor of Aomori Prefecture changed in February 2003. The Executive and new Governor Mimura have been supportive of the reprocessing plant, but they have also made critical remarks concerning JNFL, saying that, ‘Above all the soundness of the factory must be assured.’ In order for uranium tests to begin, a new safety agreement with Aomori Prefecture is necessary. This is likely to generate fierce debate in the Prefectural Assembly and there is no guarantee that this hurdle can be cleared in less than a year. As for the only envisaged end use of the plutonium, in MOX fuel, there are no signs that either the Fukushima, Kashiwazaki-Kariwa or Takahama Nuclear Power Plants will be able to use it. That the overall nuclear cycle policy has stalled is now glaringly obvious and the argument that Rokkasho Reprocessing Plant is necessary has become thinner than ever.

There is yet another reason to abandon reprocessing. In November the Federation of Electric Power Companies of Japan stated that total back-end costs amount to about 19 trillion yen (18.8 tril.). This includes the construction, operation, repair, dismantling and waste management of Rokkasho Reprocessing Plant, plus the MOX plant and the transport, storage and disposal of radioactive waste returned from overseas. Regarding the reprocessing plant, so far only the construction costs have been released. These construction costs alone keep going up and have now reached 2.14 trillion yen.

The total cost calculations for the plant are based on it operating for 40 years from 2006 then taking 32 years to dismantle. In total, the Rokkasho Reprocessing Plant alone consumes 11 trillion yen, or 60% of the total back-end costs. However this is only a very approximate minimal figure. Future increases are inevitable. In regard to this enormous figure, Japanese power companies say that they have already reached the limit of the money they are able to set aside from their own funds and that they will increase charges and also request supplements through the tax system.

Solving the problems of repair of the leaking pool and the huge waste of money is very easy in our opinion. Simply abandon the Rokkasho Reprocessing Plant. 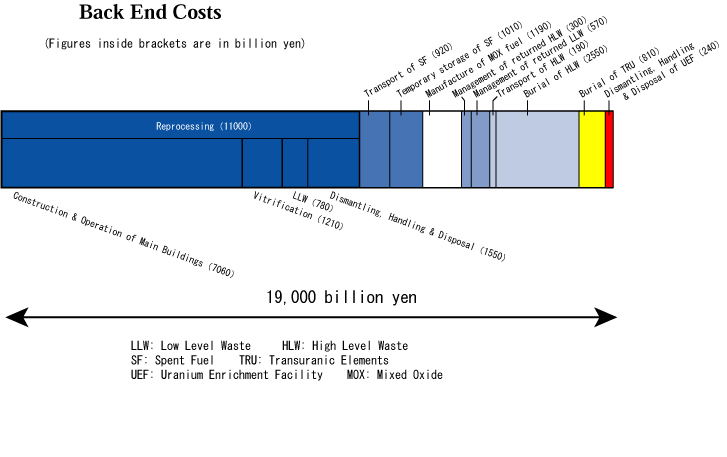