METI’s appeal to the Supreme Court

Concerning the Monju Fast Breeder Reactor, built by the Japan Nuclear Cycle Development Institute (JNC) in Tsuruga City, Fukui Prefecture, on 27 January the Kanazawa Branch of the Nagoya High Court ruled that the approval to build the reactor was invalid (NIT No.93). In response to this decision, on the 30th of that month the Minister for Economy, Trade and Industry (METI) appealed to the Supreme Court on the grounds that the decision went against a precedent set by the Supreme Court.

On 23 October, we the accusers submitted a defense to the Supreme Court refuting the government’s claim and saying that ‘the decision is in accord with precedent, so there are no grounds for this appeal, which is based on a distorted legal interpretation’. We proudly appeal to the general public to understand that this decision is not in the least bit strange; rather, that it is totally in accord with Supreme Court precedents.

The government is preparing for the start up of Monju before the Supreme Court makes a decision and is applying pressure to the Supreme Court to overturn the High Court’s decision. On 27 December 2002 METI gave permission to JNC to make alterations to Monju. These alterations are a precondition for Monju to be restarted. Since then the High Court has handed down its decision, but this has no force because it is subject to an appeal. JNC’s position is that it wants to get on with the alterations regardless of the court’s decision. In order to commence work, agreement from the regional governments is necessary, so the government and JNC have joined forces to apply pressure to Fukui Prefecture and Tsuruga City. Every month since June, the Atomic Energy Commission (AEC), the Ministry of Education, Culture, Sports, Science and Technology (MEXT) and METI have been snowing Fukui and Tsuruga Cities with symposiums and explanatory meetings. And each time, they take out a one or two page advertisement in the newspaper.

Also, Fukui Prefecture is carrying out its own safety investigation, independent of the central government’s investigation, and two years ago, in order to carry out a detailed investigation of Monju’s safety, it established the Monju Safety Investigation Expert Commission. There are five experts, all of whom have towed the government’s line until now, so the result was obvious from the time the commission was established. On 16 September they announced their conclusion that Monju is safe and called for public submissions. The final report was handed to the Prefectural Government on 14 November. The report was presented to Tsuruga City Council and the Prefectural Assembly. The plot is being laid so that, if a mood for starting work can be created in the Assembly, the Tsuruga Mayor and the Fukui Governor will be able to say that this is the will of the local people and that they have to go along with it. This is the way things might proceed, even if they have to call an emergency session of the Prefectural Assembly.

MEXT is the department promoting Monju. METI’s Agency for Nuclear and Industrial Safety (ANIS) has responsibility for regulations, so ANIS and the Nuclear Safety Commission of Japan, in order to press the appropriateness of the regulatory administration that they themselves manage, will give their full cooperation to MEXT. Of course the AEC will give its support too, so all these organizations will be encouraging MEXT. The full weight of the government will be promoting the need for and safety of Monju.

However, this type of a one-sided ‘explanation’, has been confronted with a severely critical populace at every meeting. So on 13 September in Fukui City MEXT, for the first time, held a meeting including their opponents. They hoped that that would bring to an end their maneuvers to persuade the public, but they met with fierce opposition at the symposium. Faced with pointed questions and comments from ordinary citizens, the government was left holding its hands helplessly in the air. Unable to let things end in that fashion, they held a follow-up meeting in Tsuruga City on 25 October. They drafted some supporters to speak in favor of reopening Monju, but more people were opposed and they failed once again in their attempts to create an atmosphere of public support for reopening.

At the local meetings in Fukui and Tsuruga cities on December 13, 2003, organized by the prefectural government in order to explain the report of the Monju Safety Investigation Expert Commission, they were again unsuccessful in persuading the citizens. The majority of participants expressed their dissatisfaction with the report.

Now the overwhelming attitude of the local citizenry towards Monju is, ‘The High Court has made a weighty decision, so obviously the decision should be respected.’ However the Governor of Fukui Prefecture and the Mayor of Tsuruga have taken the view that reopening Monju and commencing alterations are different issues. When the central government has been pleading with them so much, one can understand how they have become set in the feeling that they have no choice but to agree to the work. Nonetheless, there seems to be a significant difference between the stance of the Governor and that of the Mayor. The Governor will not readily agree to an early restart of Monju if the central government will not provide a positive answer regarding the development of the regional economy. On the other hand the Mayor, influenced by local business leaders, places more emphasis on the local economic benefits from Monju modification work than on any economic stimulation at the prefectural level.

Monju should be decommissioned

The government’s Monju-centered nuclear fuel cycle policy was drawn up in 1967. Since then it hasn’t changed one iota. Despite the fact that times have changed so much, we are still faced with their stubborn fixation with this 35-year-old policy. It is precisely this state of affairs which we must change. If we can’t do this, there is no future. 800 billion wasted yen has already been poured into Monju. That is all a burden that the public has to carry.

Drawing attention to these issues, we appeal for Monju to be closed down. We must build up public opinion to place pressure on the Supreme Court to confirm that the permission granted to build Monju was invalid.

To this end, on December 6, on the Shiraki beach of Tsuruga City, with Monju facing them across the water, a Decommission Monju! National Gathering was held. There 730 participants expressed their opposition to the government’s stance and appealed to the local municipality not to go ahead with modification of the Monju FBR plant (Picture). 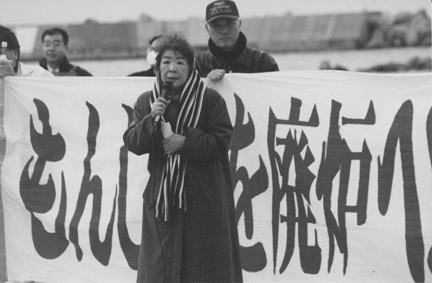 Picture :Author gave a keynote address at the national gathering.