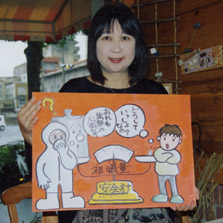 Misako Ogawa has been working for eight years as a member of the municipal assembly in the city of Kagoshima, 44 km from the Sendai Nuclear Power Station. She asks questions about the power station at every assembly meeting. Her campaign to phase out nuclear energy is a political appeal through action from within the Assembly. Feeling the need to carry the voice of the countryside to the nation, she ran for a seat in the Municipal Assembly eight years ago. She has confronted the Mayor with inconvenient issues, such as truthful investigations of problems at power stations, the question of disaster prevention, the problem of school trips to the Nuclear Power PR Center and the demand for a change to renewable sources of energy. She has emphasized again and again that, though in the case of natural disasters such as earthquakes and floods reconstruction is possible, once nuclear power plants suffer an accident that is the end. Recently her influence has spread across party lines to other council members, and more and more questions regarding nuclear power have started to emerge.

Twenty-two years ago, shortly after her eldest son was born, she happened to watch a TV documentary which heightened her awareness of the problem of nuclear power. She learned about the contract workers who carry out regular inspections at nuclear power stations, but who are unaware of their exposure to radiation. The lives of these workers who have been exposed to radiation became her stepping-stone. She was shocked to realize that our own way of life depends on the consumption of large quantities of readily available electricity, so she started anxiously reading lots of books about nuclear power.

Meanwhile the construction of Sendai Power Station steadily continued and operation was started in 1984. Then in 1986 the shocking nuclear accident at Chernobyl happened. She began to understand that once an accident has happened, the radioactive contamination crosses national borders and spreads to the dining tables of ordinary families. The effect on infants and children is especially severe. Out of a feeling that something needed to be done, she launched an anti-nuclear power network of housewives across the country.

Since then she has undertaken a variety of actions aimed at the phasing out of nuclear energy, adopting as her motto the slogan, ‘I want to live without nuclear power’. Her efforts to expand the movement to phase out nuclear power cover a wide range of activities, including opposition to the construction of new nuclear power stations, to the nuclear fuel cycle and to the export of nuclear power plants. She has carried out research in countries that have experience with phasing out nuclear power, she has organized lectures and film events regarding nuclear power and she participates in such things as signature campaigns, protest advertising and protest sit-ins. Wherever alliances can be formed with people pursuing the same goals, she will be there.

After the accident at JCO, working with an anti-nuclear power group she traveled to the city of Sendai every month for seven months to distribute pamphlets about the danger of nuclear power and she was successful in initiating citizens’ movements against the construction of Sendai Reactor No. 3.

She used the larger part of her bonus to print a picture book and a comic pamphlet, which illustrates how we can live without nuclear power. In all sorts of ways she continues to appeal to the public to oppose nuclear power. The comic pamphlet has been distributed to over 100,000 households.

Her enthusiasm to ‘pool all our wisdom to stop nuclear power plants’ has certainly helped to enlarge her mainly women’s network and the vitality of her activities has become a great stimulus for the local anti-nuclear power movement.

*Yoko Torihara is President of the Federation of the Opposition to the Building of Sendai Power Station.