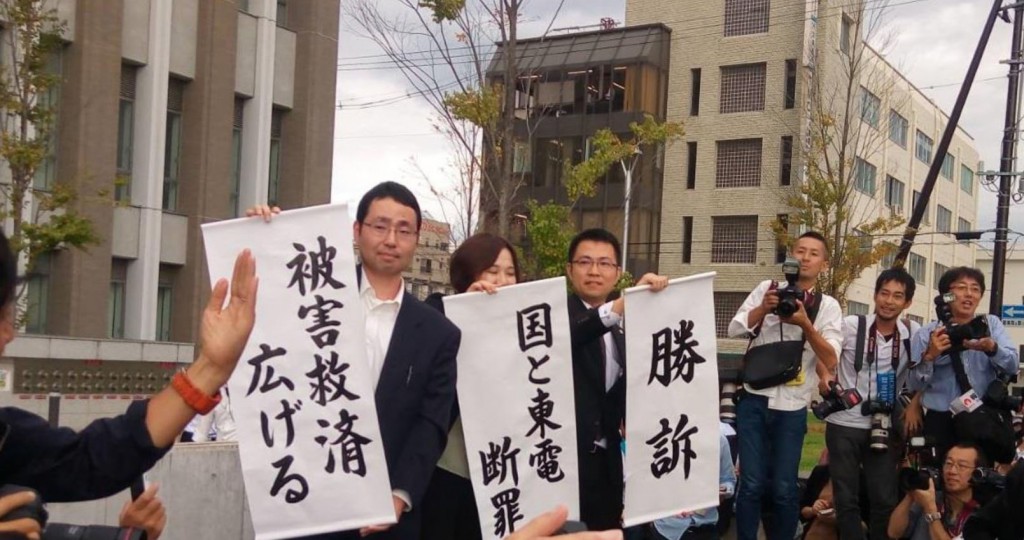 The verdict in the “Give us back our livelihoods, give us back our communities” trial, which residents of Fukushima who had become evacuees due to the Fukushima Daiichi Nuclear Power Station (FDNPS) accident had initiated at the Fukushima District Court, was handed down on October 10. The verdict fully recognized both the government’s and Tokyo Electric Power Company (TEPCO)’s liability for the accident; the government for failing to exercise its responsibility with regard to safety regulations at FDNPS and TEPCO, as the operator of the nuclear power plant, for failure to fulfill its duty in taking safety measures.
The verdict stated that while the government should have completed estimates for projections of inundation due to a large tsunami by 2002, in accordance with the recommendations of the government’s Earthquake Research Headquarters, it did not do so. Since use of these estimates would have enabled the prediction of an accident leading to a total loss of power due to the onslaught of a tsunami that exceeded the height of the FDNPS site, the government was liable for failure to exercise its regulatory powers to have TEPCO take countermeasures against such an accident. The court also recognized that TEPCO, the operator of FDNPS, was also liable for having neglected to take due care in establishing appropriate tsunami countermeasures at the nuclear power plant.
The 3,824 plaintiffs in the lawsuit included  both residents in the Fukushima Prefecture compulsory evacuation zones as well as residents in areas of high dose rates comparable with those zones and residents in Miyagi, Ibaraki or Tochigi Prefectures, adjacent to those areas.  The plaintiffs claimed damages from the government and TEPCO for having been deprived of a peaceful daily life due to evacuation, demanding that the air dose rate in their former homes be returned to the condition existing before the nuclear accident (roughly 0.04 milliSieverts). Plaintiffs whose return home was considered to be “difficult” also claimed “compensation for loss of hometown.”
Regarding the demand for “restoration of the status quo ante” the verdict stated that this “was understandable from a sympathetic point of view,” but dismissed the demand by stating that, “since the plaintiffs did not specify the content of the actions demanded, the claim is not applicable to a civil case.” The “compensation for loss of hometown” was also not recognized. On the other hand, the court recognized a breach of the right of subsistence for 2,907 plaintiffs and certified the applicable region as larger than the government’s policy on the geographical scope for compensation. Damages for so-called “voluntary evacuation” (people who evacuated on a voluntary basis, not in accordance with government instructions) was also recognized with the stipulation of additional payments to be made over and above the compensations already paid out. In total, the court ordered the government to make payments of 250 million yen and TEPCO to pay out 500 million yen.
The plaintiffs’ association and the lawyer’s group have appealed to the Sendai High Court for insufficiencies in the scope and amounts of the compensations in addition to the ruling dismissing the “restoration of the status quo ante.” The government and TEPCO have also lodged an appeal, saying that “the verdict is unacceptable,” and thus the struggle of the evacuated residents with regard to the government and TEPCO’s liability is set to continue for some time to come.
This is the second verdict to recognize the liability of both the government and TEPCO for the nuclear accident, following the March 2017 verdict In the Maebashi District Court. In September 2017, the Chiba District Court, while recognizing the possibility of prediction by the government, did not recognize the failure of the government to exercise its regulatory powers.