A mayoral election was held on October 20 in Suttsu Town, Hokkaido, along with a by-election for a town council member to replace Echizenya Yoshiki, who had stepped down to run for mayor. The town had previously applied for a literature review that has been in progress since November of last year, signifying the initiation of the selection process for a high-level waste disposal site. With no-vote elections having continued four times for lack of an opponent, this was the first time in 20 years for the town to hold a mayoral election.

Echizenya had been appealing for withdrawal of the application for the literature review, but he lost the election, receiving 900 votes versus incumbent Mayor Kataoka Haruo’s 1135 votes in his sixth election. Some newspapers went so far as to proclaim “support for a continued nuclear waste review.” If it had been a referendum on whether to continue or withdraw from the review, however, the result would probably have been different. An exit poll by Hokkaido Shimbun found 44 percent seeking immediate withdrawal from the review and 33 percent supporting its continuation (of whom half wanted it limited to the review only). “I don’t know” or “I haven’t decided” responses made up the other 23 percent. Meanwhile in the councilor election, Yoshino Takutoshi, who entered the race as a candidate promoting Echizenya’s policies together with him, won his first election with 1121 votes versus his opponent’s 884.

Note that on November 9, five town citizens filed an objection to the Suttsu Town election seeking a decision to invalidate the results on the grounds that violations had occurred such as publicity postcards favoring Mayor Kataoka in the election being created by town officials and distributed to intellectually disabled persons via welfare facilities, who then brought these postcards to the polling place and asked for help filling in their ballot.

Regarding the suits filed by Kanden no Genpatsu Money Fusei Kanryu wo Kokuhatsusuru Kai (below “Kokuhatsusuru Kai,” Association to Litigate Kanden’s Nuclear Kickbacks) over suspicions such as bribery and aggravated breach of trust under the Companies Act, revolving around monetary improprieties by former Kansai Electric Power Co. (Kanden) officials who received money, gifts and supplementary compensation (see NIT No. 193, 194 and 197), the Special Investigation Division of Osaka District Court gave notification on November 9 that it would not institute prosecution of nine former Kanden officials, including former chairman Mori Shosuke, citing insufficient evidence. Kokuhatsusuru Kai held a protest in front of the district court on the 10th and has announced its intention to file a review with the prosecutor’s office over dissatisfaction with its measures.

The first hearing of the intermediate appeal in the criminal trial seeking responsibility for the Fukushima Daiichi nuclear accident got underway on November 2 in the Tokyo High Court. As defendants, former Chairman Katsumata Tsunehisa, former Vice President Takekuro Ichiro and former Vice President Muto Sakae of Tokyo Electric Power Co. (TEPCO) face mandatory indictment for professional negligence resulting in injury or death. The defense is pleading innocence once again as it did in the first trial, in which all three defendants were acquitted (see NIT No. 192). The attorney that has been appointed prosecutor has sought to annul the first trial and called for inspection of the nuclear power plant. The decision to adopt or reject these is being carried over until the next hearing on February 9 next year.

The two Tokyo District Court judges presiding over the stockholders’ representative action seeking responsibility in the above case from the stockholders’ point of view visited the Fukushima Daiichi Nuclear Power Station, where they conducted the first on-site inspection to be held by a court at that site since the March 11, 2011 disaster. They also held a locally scheduled conference, which has substantially the same objective as an inspection but does not involve compiling an inspection record focused on the items the court wants to see. Instead, the plaintiffs or defendants compile and submit reports for the court to consider as evidence in its decision.

First, they surveyed Units 1, 2, 3 and 4 from above, on the 30-meter platform, confirming the bowl-shaped terrain around each. They viewed items such as the twisted framework of the Unit 1 reactor that had exploded and the huge cover atop the Unit 4 spent fuel pool. Plaintiff attorney Kaido Yuichi reported that they could see that excavation of the elevated ground 30 meters above sea level by 20 meters had rendered the terrain substantially more vulnerable to tsunamis. They went on to inspect items along the pathway on the 10-meter platform, such as entrances for large objects to be carried in, louvers (intake ports) and openings in concrete blocks of the turbine buildings of Units 1, 2, 3, and 4, their shared pool building and other facilities for direct confirmation of the places where seawater had penetrated. By imagining the tsunami’s run-up, they could confirm points such as that the louvers and openings in the blocks—obvious weak points—had been left open and that the entrances for large objects had been equipped with protective doors, but those also had been left open, though if they had had a watertight structure, penetration of the tsunamis could have been prevented.

Problem of Massive Damage to Ventilation Filters at ALPS Facility 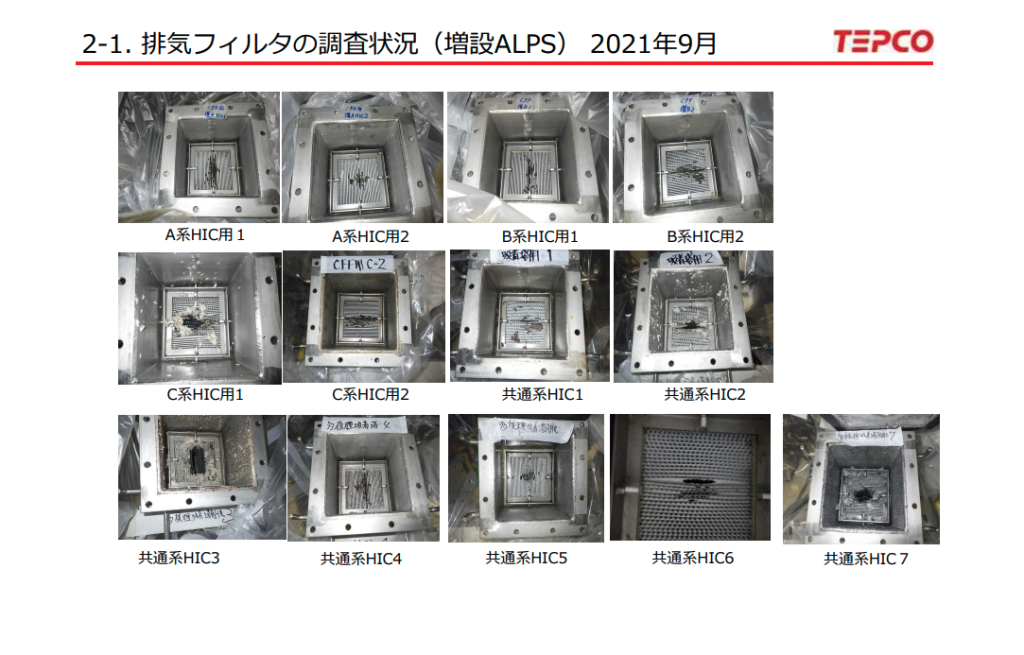 Damage was discovered on August 30 to ventilation filters at the Advanced Liquid Processing System (ALPS) facility operated by Tokyo Electric Power Holdings (TEPCO) at the Fukushima Daiichi NPS. While slurry was being transferred on August 24 within the “ALPS extension” facilities, an alarm sounded on the transferring equipment’s ventilation line, so the work was halted and an investigation begun, resulting in discovery of the damaged filters on the 30th. The latest information on identifying the cause and details of the damage was released by TEPCO on September 30 at a secretariat conference and meeting of the teams in charge of measures for decommissioning, contaminated water and treated water. Information is compiled below on the details and cause of the problem based on that.

A total of 25 ventilation filters for slurry transference operations had been installed, of which 24 were found ultimately to have been damaged. In fact, the same problem had occurred two years earlier. At that time, all 25 filters were damaged. According to TEPCO, the filters were all merely replaced then, with no report being filed with either the Ministry of Economy, Trade and Industry (METI) or the Nuclear Regulation Authority (NRA) Commission, and no investigation being pursued. Incredibly, this was not even reported at the above-mentioned meeting. Moreover, the damaged filters were merely replaced once again and the transference operation resumed and was completed on September 28.

The dust monitor sounded the alarm during the slurry transference operations, but what had caused the damage to the filters was not the slurry transference, but rather air-blowing operations, which are part of normal slurry recovery operations. Mist in the high-integrity container (HIC) was sucked into the filters, resulting in serious deterioration due to the moisture, so when air-blowing was conducted, the filters ruptured. A look at the photos above shows the damage to be concentrated in the center of the filters. Air flows with great force through the holes, which have diameters as large as 5 centimeters. The direct distance between the filters and their respective intake ports is 13 centimeters, so it seems the heavily deteriorated filters ruptured due to the concentrated air flow at the center.

In the future, an attempt will be made to elucidate how this non-compliant operation occurred. Also, elucidation of the causes will be encouraged and lasting measures will be considered while implementing measures regarding operations and protection.