Group Intro: Kodoken Tsūshin, a Quarterly Issued by the Project to Protect Children’s Health and Future 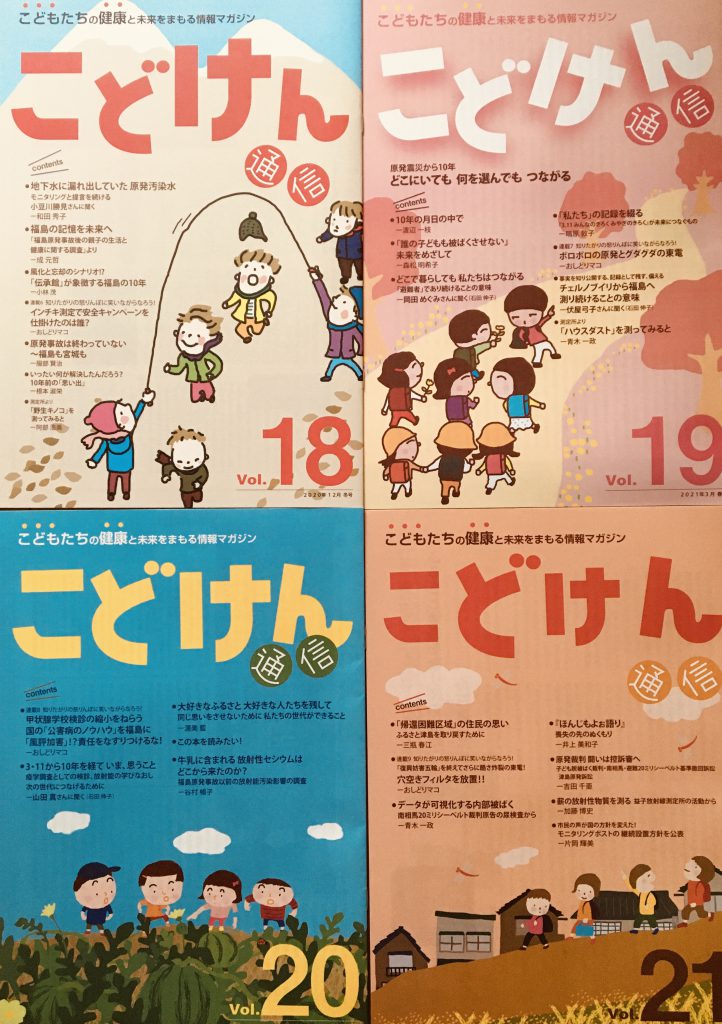 In 2016, we, the Project to Protect Children’s Health and Future, abbreviated as Kodoken in Japanese, launched a quarterly newsletter, Kodoken Tsūshin.

“There will be no immediate impact on your health,” was the announcement Japanese televisions started to repeat shortly after the nuclear disaster that followed the Great Eastern Japan Earthquake in 2011. The media was full of publicity trying to brainwash people into believing that radioactivity was safe. An atmosphere discouraging residents from mentioning danger or anxiety spread quickly throughout Fukushima. Under such circumstances, we started up our activities with the organization of a health consultation event in cooperation with physicians practicing outside the prefecture. We had heard that many parents and children in Fukushima had had the experience of being laughed at or shouted at by local physicians when they asked: “Could the health problems my child is experiencing, such as a nosebleed, have been caused by radioactivity?” Places were needed where parents could consult physicians without feeling anxious. We organized many other events as well, such as gatherings to share parental experiences , radioactivity learning sessions, recreational lodging events for children, and programs for raising radioactivity literacy for junior high school students. “When my child was wearing a facial mask according to my instruction, a teacher made a mockery of it.” “I asked my child not to drink the cow’s milk served as part of school lunch, but then the class became very unfriendly.” “Children in school sports clubs were exercising in the high-dose schoolyard as if it were no problem at all.” Parents were desperate when talking about these experiences. In addition, many of them experienced a breakup with their family or spouse.

While Fukushima has been flooded with publicity for recovery, activities that questioned radioactive exposure began to be criticized because “such activities would make people more concerned about radioactivity and result in prejudice against Fukushima.” There is even an opinion that says, “A fact check is required for whether radioactivity is dangerous or not.” Children are abused as the “symbol of safety”: When a road once closed due to the nuclear disaster is reopened, children are “invited” to participate in cleaning the road; the use of locally harvested produce in school meals and at “children’s cafeterias” for the needy is announced; and high school and college students are invited to visit nuclear power plants under the name of “active learning programs.” All these events are used as PR material to pressurize people into believing that radioactivity or exposure to radioactivity is “nonexistent.”

We decided to issue Kodoken Tsūshin under these circumstances, believing that it is necessary to distribute knowledge and information about radiation and thus help people protect themselves, and to provide a communication tool. In Fukushima, this quarterly is distributed as a free newsletter delivered through various community groups and citizen radioactivity measurement stations.

Ten years has passed since the earthquake and nuclear disaster. We hope to use this small newsletter as a tool that can bridge the divisions between those who live in Fukushima, those who evacuated, and those who once evacuated but returned. We also hope to use it as information that will prevent the whitewashing of radioactivity or exposure to radiation. Those who have returned to Fukushima and those who have stayed in their evacuation locations have equally suffered from the nuclear disaster and are the victims of the policy of the Japanese government, which is still trying to promote nuclear power and has not given up on nuclear power plants. Through the newsletter, we hope to carry the thoughts of evacuees, the narratives of the youth who were children at the time of the disaster, the latest news of the lawsuits fought nationwide, and the introduction of radioactivity measurement stations and measured data, thus delivering various voices to bridge the divisions and keeping the victims connected, wherever they may live.