Anti-Nuke Who’s Who Yoshiko Kuratsubo: committed to her hometown of Hirosaki Nuke Info Tokyo No. 115 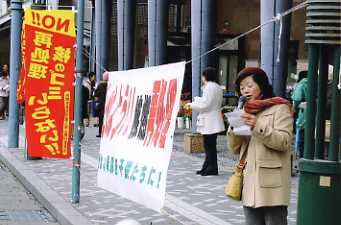 On August 26, 2006 eight members of the “Association of Mothers to Protect Children from Radioactivity” conducted their 221st public demonstration. During the protest Yoshiko Kuratsubo, born and raised in the Tsugaru region of Aomori Prefecture, gripped the microphone and addressed passers-by in her kind voice. Yoshiko joined the movement to oppose the nuclear fuel cycle facilities located in the village of Rokkasho 20 years ago. She began marching in monthly demonstrations, with her young children in tow. The Association’s slogans captured the essence of the issues at stake: “Children must be protected from radioactivity.” “We can’t leave the costs of nuclear power to our children.” “Let’s not pollute our hometown.”The “Association of Mothers” began holding regular demonstrations in July 1986, following the nuclear disaster at Chernobyl. They march in snow or rain, sometimes as few as three people and sometimes as many as thirty, but more important than numbers, the people of Hirosaki see a visible and recognizable opposition to the nuclear fuel cycle facilities.

The group makes its way slowly along the busy shopping district of Hirosaki, holding a quilt stitched with the phrase “We don’t need nuclear fuel cycle facilities.” They call out to onlookers with a hand-speaker and distribute leaflets. It was very difficult for Yoshiko when she first embarked on this path of protest. She confessed that when she first began marching she looked down at the ground, afraid of meeting someone she might know. Now when she sees friends or acquaintances, she waves with a confident enthusiasm. For people of Hirosaki the demonstration is a familiar sight. They often shout encouragement to the demonstrators. Yoshiko feels that everyone is against the nuclear fuel cycle facilities, but most people find it extremely difficult to publicly express such feelings. She believes that people are grateful to the “Association of Mothers” and that the warm greetings they receive are an expression of gratitude for continuing demonstrations on their behalf.

Hirosaki is Japan’s number one apple producing region. More than ten years ago, Yoshiko started seasonal work during the spring and fall at an apple farm operated by a family that she met through the movement. She helps out from the time when flower buds open until the apples are ready for harvest. She says that by playing her part, she has come to understand both how hard farmers work and their feelings about their apples.

Early spring in Hirosaki is a season of spectacular beauty, as the apple blossoms burst into full bloom. The village of Rokkasho is some 80 kilometers from Hirosaki, but if an accident occurred at the Rokkasho reprocessing plant, radioactive contamination would spread to Hirosaki polluting everything including this beautiful landscape. She feels more strongly than ever now the importance of protecting her hometown from radioactive pollution and preventing the ruin of an industry that is deeply rooted in this region of Japan.

When the region of Tsugaru is mentioned, what springs to mind in Japan along with apples is the Tsugaru shamisen. Yoshiko also plays the Tsugaru shamisen, an instrument she began studying 10 years ago. Today she gives concerts at various events and at nursing homes, but her first encounter with the Tsugaru shamisen was also through the movement. In this way, Yoshiko’s loyalty and commitment to her hometown of Hirosaki, reflected in her continuing participation in protest activities, has become even stronger.

During the past twenty years Yoshiko and her friends have engaged in a variety of protests and demonstrations to protect children and their homeland from radioactive pollution. Although active testing has begun at the Rokkasho reprocessing plant, Yoshiko is determined never to give up, but to continue with perseverance and good spirits the movement to terminate the plant.