Anti-Nuke Who’s Who The Sea and Takeichi Saito Nuke Info Tokyo No. 99 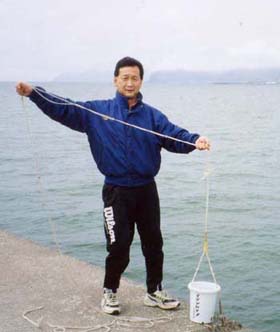 Born in 1953, Takeichi started measuring the temperature of the sea in early Spring, 1978. In the spring of 1977, at the age of 24, he was suffering from sores all over his body. Unable to continue his student life in Tokyo, he returned to his hometown Iwanai in Hokkaido.

When he returned, it was the sea and the sky which welcomed him – warmly, with no questions asked – and he worried about the future of his beloved hometown, then in the midst of a debate about the construction of a nuclear power station.

Hokkaido Electric Power Company (HEPCO) had started making preparations for the construction of two nuclear reactors at Tomari Village, which lies in the Herokaruusu area on the opposite side of Iwanai Bay, about 5 km from Iwanai Town. Iwanai’s main industry was fishing and at the time the Iwanai County Fishing Association was vehemently opposed to the construction of a nuclear power station.

When the power station starts operating, radiation will be released. Furthermore, large amounts of seawater will be used as cooling water. This will be warmed by around 6 degrees or 7 degrees then discharged continuously as thermal discharge back into Iwanai Bay. “The sea will be murdered. Our hometown will be destroyed.What should I do?”, he wondered.

He was unable to shout out against the power station and he had absolutely no idea what a person such as himself could do. Distressed by this state of affairs, he went to the harbor nearby his house and, gazing at the proposed site of the nuclear power station on the opposite shore, he continued to mull over the problem.

On one of those days, he thought to himself that even if it was impossible to fight against the power station itself, there must be something that he as an individual could do.

“The sea! That’s it! The sea which has supported the town of Iwanai for all these years! We have to protect the sea right in front of our eyes.”

Even though it was repugnant for him to accept the construction of the power station as a fait accompli, he realized that it was important to measure the temperature of the seawater before large amounts of thermal discharge water were released. He decided that that was what he would do.

From that moment his struggle began. At the start it was a case of groping his way forward – finding a place on the breakwater to measure the seawater temperature, deciding the time, choosing his implements – but in the process he developed his own unique methods. However, doubts persisted. “Am I really helping to protect the sea? Am I not just running away from the fight against the power station? Does the data, which I collect every day, have any scientific foundation?”

The sea greeted him with many different faces. Its colors and moods changed every day. On stormy winter days he was sometimes almost swept away by the waves which broke over the seawall. But the sea kept saying to him, “Protect me!”

The data he collected corresponded wonderfully with the data of Hokkaido Prefecture and HEPCO. At times he also pointed out mistakes in the Prefectures data, forcing them to correct it. Truly he has, in his own way, carried on the fight.

Twenty-seven years have passed since Takeichi began measuring the temperature of the seawater. Over that time, as a childcare worker, he has nurtured the development of many children. But even now, supported by his family, he still takes his bucket and thermometer every day and, along with the sea he loves so much, he continues the fight against Tomari Power Station.