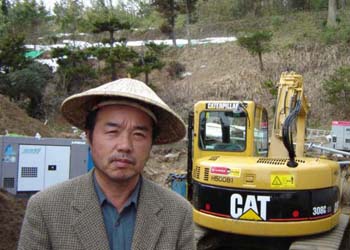 The Kashiwazaki-Kariwa Nuclear Power Plant (NPP) is the largest NPP in the world, with 7 reactors and a total power output of 8,212 MWe. It was built by the largest electric power company in Japan, Tokyo Electric Power Company (TEPCO).Kashiwazaki City and Kariwa Village are located 250 km north west of the capital, Tokyo. The area has a population of 100,000 people and is surrounded by mountains and sea. It is mainly a region of paddy fields, but there was oil drilling there 100 years ago and some related machinery industry remains. The plan for a nuclear power plant was announced in 1969, just when agriculture began to decline.

Kazuyuki Takemoto was born in 1950, the oldest son of a farmer whose farm was near the NPP site. A farmer himself and also a technologist involved in agricultural construction, Kazuyuki is engaged in survey, planning and design work related to water and soil. He is also involved in flood response and post-earthquake recovery planning. He has opposed the NPP plan ever since it was announced, taking the view that “nuclear energy is dangerous and will ruin the local community”. He has been campaigning now for over 35 years. During that period he was a local councilor for 6 terms, for a total of 24 years.

Besides protesting the all too frequent nuclear accidents, in 1979 the movement against the Kashiwazaki-Kariwa NPP initiated a lawsuit for the annulment of the plant’s license. This lawsuit is still continuing. It has been campaigning against the pluthermal plan since 1997 and is also campaigning on the problem of electro-magnetic radiation associated with high voltage transmission cables.

More than 20 years have passed since the first reactor at Kashiwazaki commenced operations. Aging is a big issue and numerous cracks have appeared in the pipes and structural components of reactor cores. Kazuyuki is a key member of the movement, employing the wealth of knowledge he has picked up from experts to home in on TEPCO’s weak points. Consequently, he is a very busy man.

Kariwa Village, where Kazuyuki lives, has a population of 5,000 people. One in every four families has a family member who makes his or her living at the NPP or at a related company. It is like a castle town, totally dependent on the castle, though in this case the castle is the NPP. But it was this same Kariwa Village which, in 2001, held a referendum and a majority voted against the pluthermal1 plan. This achievement was brought about by the joint efforts of many people within the movement.

Kazuyuki studied geology and seismology and in 1974 drew attention to the poor quality of the ground on which the NPP stands, pointing out that the NPP would not withstand a powerful earthquake. Ever since, he has been arguing with TEPCO, which built the plant, and the government, which approved the license, about the NPP’s earthquake resistance. The Niigata Prefecture Chuetsu Earthquake occurred in October 2004. Now, the ability of the plant to withstand earthquakes has become the issue of greatest concern in the area. Recently, people working at the NPP have begun to give inside information to the anti-nuclear energy movement in Kashiwazaki and Kariwa. This is evidence that the movement, which has been campaigning for all these years, is trusted in the local area. The Kashiwazaki Kariwa anti-nuclear energy movement hopes to change nuclear policy from the regions. Kazuyuki Takemoto sees nuclear energy as war technology, which began with Hiroshima and Nagasaki. He believes that it is incompatible with human peace and environmental preservation. He is engaged in the movement against nuclear energy, because he believes that society must rid itself of nuclear energy as soon as it possibly can.

1. The term ‘pluthermal’ refers to the use of plutonium in the form of ‘mixed oxide’ (MOX) fuel in light water reactors.

* Noritomo Nagase is a local councilor in Kariwa local council. He has worked with Kazuyuki Takemoto against the Kashiwazaki-Kariwa Nuclear Power Plant from the beginning.