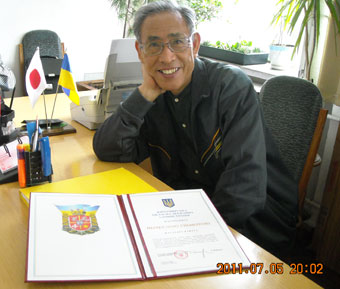 “In April 1990, four years after the 1986 Chernobyl nuclear disaster, Mr. Masaharu Kawata became one of the founders of the Association to Help Chernobyl, Chubu-District, Japan. Mr. Kawata was already well known as an anti-nuclear energy activist in Aichi Prefecture from before the Chernobyl accident, and was an active member of the anti-nuclear energy citizens group ‘Kinoko no Kai.’After the Chernobyl accident, he became involved as a citizen scientist in lectures and study groups for citizen activists. He answered questions such as “What happened in the Chernobyl accident?” and “In what ways is radiation dangerous?” He did not mind making efforts to explain elementary questions to people who wanted to know. Amongst others, he implemented study groups for parents raising children, in which the now classic “Why Plutonium is Dangerous” by Jinzabur? Takagi was used as a text. Mr. Kawata explained all the difficult words in a friendly way. He was a popular teacher because he was easy to understand. After the Fukushima accident, he began once again to travel around Japan giving lectures.

Besides the nuclear problem, Mr. Kawata has also acted against a number of pollution issues in Japan and around the world. He gave support to citizens in the Yokkaichi Asthma trials (1969-1972) and the Fujiwara district cement pollution trials (1970-1982). From 1980 he carried out investigations into environmental pollution in Taiwan, Korea, China and the Philippines. In 1987, he lectured on the pollution problem in Taiwan at a symposium at Chicago University. In May 1990, he also testified at the Upper House Budget Committee on the pollution problem in the Philippines. Mr. Kawata has worked as a citizen activist both inside Japan and overseas.

As a specialist in molecular biology, in 1995 Mr. Kawata became the spokesperson of the GMO Information Service Japan, an organization that gathers and distributes information on genetic engineering technology. In May 2009, he acted as a spokesperson for citizens groups at the Cartagena Protocol on Biosafety and brought forward problems using down-to-earth survey activities.

The support activities for victims of the Chernobyl accident were carried out at the time by an NGO on a trial and error basis. There were heated discussions with the Ukrainian counterpart ‘Chernobyl Hostages’ on self-help, and compromises had to be made at times. After working as an activist in for 20 years, Mr. Kawata wanted to break away from the series of involvements in radioactive pollution, sickness, poverty and aid. After his proposal in 2007, the Nanohana (Rapeseed) Project was started to help revive soil polluted with radioactive material in the Norochizi area. This year will be the fifth year of the experiment, and the results are expected to help revive the radioactively polluted soils in Fukushima.

*Board member of the Association to Help Chernobyl, Chubu-District Japan