Complete Halt of All Nuclear Power Plants in Japan But for how long can restarts be prevented? Nuke Info Tokyo No. 148 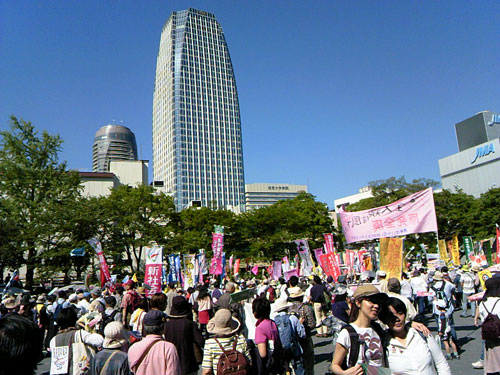 May 5 is “Children’s Day” in Japan, a holiday on which the happiness of children is celebrated. On this day in 2012, the children received the special gift of the total shutdown of all Japan’s nuclear power plants. The one reactor that was online, Hokkaido Electric Power Company’s Tomari Unit 3 (PWR, 912MW) was halted for regular maintenance.

At the time of the accident at Tokyo Electric Power Company’s (TEPCO) Fukushima Daiichi Power Station, Japan’s nuclear reactors numbered 54. A year later, on April 19, Fukushima Daiichi Power Station’s Units 1 to 4 (BWR, Unit 1, 460MW, Units 2 to 4, 784MW each) were officially decommissioned, leaving the number of reactors in Japan currently at 50. After the Fukushima nuclear accident, nuclear reactors that had been halted due to regular maintenance or problems before the Fukushima nuclear accident occurred, and those shut down for regular maintenance one after the other in the weeks and months following the nuclear accident could not be restarted. As a result, all of Japan’s nuclear reactors are now shut down.

The government and the power companies have tried desperately to get even one or two reactors restarted in order to avoid this total shutdown scenario, and now that all the reactors have been halted their intention is to break out of this situation as soon as possible. But they are faced with strong resistance; that of gaining the approval of the local administrations of the areas in which the power plants are located. Legally, the local administrations have no power to prevent restarts. Under the safety agreements concluded between the power companies and Fukui Prefecture, Niigata Prefecture and the administrative units (cities, towns and villages) in which the power plants are located, when it is judged that there is a need for special measures to be taken following an on-site inspection by administrative body officials, the administrative body can demand that the power company take appropriate measures, including the shutting down of reactors, and it is specified that in the case of shutdowns consultations must take place before reactors are restarted.

In the case of Fukui, even when the state establishes a special commission to investigate an accident, there must be consultations prior to reactor restarts. Naturally, however, this is limited to the reactors in which the accident actually occurred. In addition, these are consultations, and it is considered that ‘prior approval’ is not in fact required. In agreements other than the Fukui and Niigata Prefecture agreements there is not even mention of prior consultations. That restarts cannot be implemented without the prior approval of local administrations is, of course, due to strong public opinion following the Fukushima nuclear accident. Moreover, because of the spread of nuclear contamination that took place as a result of the Fukushima nuclear accident, not only the local administrations where nuclear power plants are located but surrounding administrations are also insisting that the power companies seek their approval before reactor restarts (as well as the conclusion of safety agreements).

On April 13, the government, in a meeting of the Prime Minister, the Minister of Economy, Trade and Industry, the Minister of the Environment and for the Restoration from and Prevention of Nuclear Accidents, and the Chief Cabinet Secretary judged that proposed restarts of the Kansai Electric Power Company’s (KEPCO) Ohi nuclear plant Units 3 and 4 (PWR, 1180MW each) were appropriate. On the next day, April 14, the government explained this decision to the local administration, Ohi Town in Fukui Prefecture, and to adjacent Shiga Prefecture and Kyoto Prefecture on April 23, urging their ‘understanding.’ In response, Fukui Prefecture indicated that it would initiate verification of the decision in the prefecture’s Nuclear Power Safety Specialist Committee and Shiga and Kyoto Prefectures each stated their intention of deliberating the matter in specialist committees of experts.

Prior to the government explanation, Shiga and Kyoto Prefectures submitted a seven-point proposal to the government on April 17 in which they demanded the early establishment of the Nuclear Regulatory Agency and a roadmap indicating a phase-out of reliance on nuclear power, showing that ‘understanding’ was still quite some way off. Further, on April 10, Osaka Prefecture and Osaka City, one step further away from Fukui Prefecture, announced eight conditions, including the conclusion of safety agreements with local administrations within 100 km of nuclear power plants, which was submitted to the government on April 24. Fukui Prefecture had already, on September 15, 2011, demanded that the government strengthen disaster prevention measures such as the early construction or improvement of roads for disaster control, as well as making restarts conditional on such matters as the public announcement of all information concerning the Fukushima nuclear accident. Opinion polls conducted by mass media companies also showed that opposition to restarts was running strong and that the hurdles to nuclear reactor restarts are, in fact, very high.

In spite of this, it is not easy to predict how long restarts can be prevented. The most important thing is to prevent restarts from occurring for as long as possible and show for a fact that there is no non-nuclear power supply shortage problem in Japan, even in overcoming the summer peak power demand. It is undoubtedly for this reason that the government and the power industry want to restart as many nuclear reactors as possible in order to be able to say that we were spared blackouts thanks to nuclear power. Concerning power supply, the government and the power industry are disseminating the propaganda that if nuclear reactors remain shut down demand will exceed supply, especially in KEPCO’s generating region. However, with regard to KEPCO’s estimated power demand, several experts have pointed out that KEPCO has underestimated both its supply estimates and the effect of power saving compared with other power companies, and that power supply compatible with demand is possible by purchase of power from other suppliers.

In any event, the implied notion that “power supply is more important than safety” is mistaken. Even though that may be so, over and above that, and with the background of the proof that there is no non-nuclear power supply shortage problem, we would like to bring about a phase-out of nuclear power through clear enshrinement in laws as the policy of the state and/or as the firm decision of the power companies. While a nuclear phase-out may be fraught with difficulties, it is not always clear exactly what those difficulties are. Once the country is determined to implement a nuclear phase-out policy, the difficulties will then become clear in a much more concrete form. It is, indeed, only in this way that appropriate countermeasures can be set up.

The government has said that it will initiate a national public discussion on energy policy. The new energy policy, entitled the “Innovative Energy and Environmental Strategy” is due to be finalized sometime this summer. Formulation of the “Strategy” is to be coordinated by an “Energy and Environment Council” consisting of the Minister for National Strategy as chairperson, and the Ministers of Economy, Trade and Industry; Education, Culture, Sports, Science and Technology; and the Minister for the Restoration from and Prevention of Nuclear Accidents. It is said that the “Strategy” will reflect discussions on a review of the Framework for Nuclear Energy Policy and the Basic Energy Plan.

The Framework for Nuclear Energy Policy is a document drawn up and approved by the Atomic Energy Commission, and the task of drawing up a revised version began in late 2010. The Basic Energy Plan is drawn up by the Advisory Committee for Natural Resources and Energy, a consultative body of the Minister for Economy, Trade and Industry, is approved by cabinet decision and takes the form of policy drawn up by the government. The Plan was revised recently, in 2010, and since it has a very strong bias towards the promotion of nuclear power, following the Fukushima nuclear power plant earthquake disaster it is due to be reviewed “from scratch.”

The review of the Basic Energy Plan will indicate options for the composition of power supply from different sources (nuclear power, thermal, renewables, etc.), and the revision of the Framework for Nuclear Energy Policy will show options for the nuclear fuel cycle (reprocessing of all used fuel, direct disposal, and storage), data such as costs and CO2 emissions being given for each of these options. The options for the new energy policy will then be the subject of national discussion. The options themselves look as if they will present problems, since the effect of energy conservation and other efforts are likely to be underestimated for each of the options, leading to a higher estimate for total power demand. CNIC’s Hideyuki Ban is participating as a committee member in both reviews and is struggling to ensure that at least some meaningful options are taken up. In the end, however, it is crucial that it is the people of the nation who decide energy policy and that the solicitation of opinions does not become a mere exercise in formality.

see CNIC’s statement: Toward a New Era in which the people Choose the Energy (5 May, 2012)