Issues of Incineration Disposal of Agricultural and Forestry Radioactive Wastes in Fukushima Prefecture by Toshikazu Fujiwara -Nuke Info Tokyo No.166

The Fukushima Daiichi Nuclear Power Station accident released radioactive substances across a wide area of the environment. Currently, not only decontamination operations but also people’s everyday lives generate wastes that include high concentrations of radioactive substances. The Japanese government terms radioactive wastes from 8,000 to 100,000 becquerel per kilogram (Bq/kg) designated wastes. They are today stored temporarily at various locations, while at some point in the future, after reducing their volumes, the government plans to bury them in the prefectures where they were generated. In this article, Toshikazu Fujiwara, who is well-versed in the volume reduction of these contaminated designated wastes, discusses the issue. (Nobuko Tanimura)

In Fukushima Prefecture, the Japanese Ministry of the Environment is promoting the Waste Volume Reduction Project, which, by means of makeshift incineration facilities, incinerates the combustible wastes that are specifically designated according to the level of contamination (at or over 8,000 Bq/kg) attributed to the radioactive substances emitted from the Tokyo Electric Power Company’s Fukushima Daiichi Nuclear Power Plant. The combustible designated wastes include agricultural and forestry byproducts such as paddy straw, feed crops, fallen leaves, and manure; sewage sludge; and wastes from home cleaning.

According to the project, the construction of 24 makeshift incinerators is being carried out in 19 municipalities in the prefecture, most of which are already in service.

The first of these incinerators to be constructed is located in Samegawa Village, Fukushima Prefecture. Having been built as a demonstration incinerator, it has the following formal purposes: 1) reducing volumes of wastes; 2) checking safety and associated factors as well as accumulating knowledge concerning the incineration of radioactive contaminated wastes exceeding 8,000 Bq/kg; and 3) determining the environmental impacts of radioactive cesium and other substances after incineration. However, the incinerator constructed in Samegawa was presumably a preliminary project in preparation for subsequent large-scale waste incineration projects.

The waste volume reduction project states as its purposes improvement of the living environment for the restoration of the region and for the encouragement of the return of the people who used to live there, and making contributions to the progress of decontamination programs and the recovery of Fukushima Prefecture. Nevertheless, the waste volume reduction project totally ignores the risk of accidents, such as explosions associated with the incineration of radioactive contaminated wastes (the Samegawa makeshift incineration facilities exploded on the ninth day after the commencement of full-scale incineration services), environmental contamination, and health impacts on the people living in the neighborhood. 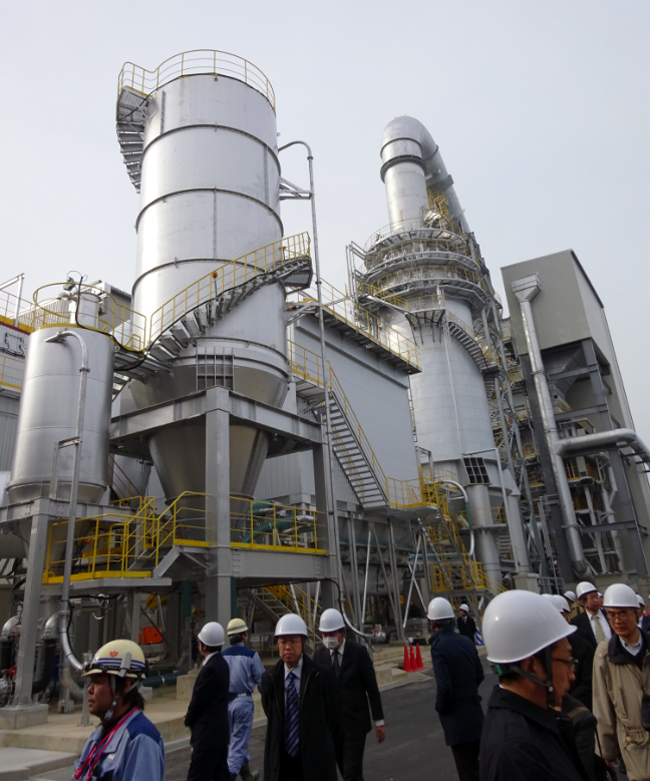 (2) Defects and procedural contraventions in the Special Measures Act

The legislation on which the wastes are designated and waste volume reduction programs are promoted is the Act on Special Measures Concerning the Handling of Environment Pollution by Radioactive Materials Discharged by the Nuclear Power Station Accident, established on August 30, 2011. This Act has the following fundamental defects: 1) while the procedure for designating wastes is stipulated, the procedure for removing wastes from the designation is not included; 2) the Act specifies that wastes exceeding 8,000 Bq/kg should be treated as designated wastes and wastes exceeding 100,000 Bq/kg should be stored in interim storage, but these radioactivity criteria are not scientifically persuasive; 3) the amounts of the designated wastes are overestimated because they were not determined by proper investigation; 4) the Act does not oblige Tokyo Electric Power Company, the company responsible for the emissions, to perform countermeasures, such as the prevention of radioactive substance discharge and the collection, disposal, and storage of contaminated wastes; and 5) the Act includes no procedural stipulation for information disclosure and accountability to, or the agreement of, local residents, all of which should be preconditions for waste incineration.

I assume that no country has so boldly promoted the incineration of radioactive wastes attributed to a nuclear power plant accident as in the Fukushima case presented in this article. Furthermore, the Ministry of the Environment has been mixing the designated wastes exceeding 8,000 Bq/kg with less contaminated wastes before incineration in order to reduce ash contamination per unit volume and thus prevent the ashes from exceeding 100,000 Bq/kg, over which they would need to be stored in interim storage facilities. The Ministry has repeatedly explained that the incineration of designated wastes exceeding 8,000 Bq/kg by means of the makeshift incineration facilities is safe, because the facilities are provided with bag filters that capture 99.99% of radioactive substances (mainly radioactive cesium particles) in the exhaust gas emitted through the incinerator funnels, reducing them to an undetectable level. However, gaseous substances and microparticles such as particulate matter 1.0 are known to be emitted through the filters, and bag-filter applications in conventional incinerators confirm that the filters break down easily. According to the makeshift incineration facilities test project commissioned by the Ministry of the Environment and performed by the Japan Atomic Energy Agency (JAEA) in Okuma Town and Iitate Village, Fukushima Prefecture, the mass balance analysis that compared the amounts of cesium in the wastes loaded into the incinerators and those in the output indicated that the whereabouts of 30% to 40% of radioactive cesium were unknown. The missing amounts of cesium may reside in the incinerator, ducts or funnels, or may be leaking from seals and other leak-susceptible locations in the facilities. If this is the case, incineration is highly likely to cause the spread of radioactive substances in a radius of several kilometers around the facilities, resulting in ground fallout and thus contamination of the land, increasing the health risks to locals. The Ministry of the Environment has performed no risk assessment in this regard.

The budget the Japanese government has appropriated for this series of waste volume reduction projects is abnormally large. Overseas observers have previously regarded the huge spending by Japanese municipalities on the construction and maintenance of waste incineration facilities as extraordinary. The total cost of just the construction projects for makeshift incineration facilities that we know about, and which are planned to be used for as little as three months to three years, amounts to 400 billion yen. This amount does not include most of the cost of incinerator dismantling or site decontamination. The entire waste volume reduction project is an abuse of an enormous amount of tax revenue. If methods other than incineration were used, a considerable amount of expenses could undoubtedly be saved.

In consideration of environmental loads and accident risks, the incineration and ash burial of radioactive wastes cannot be the optimal disposal system, no matter if the wastes are those generated anew by the Fukushima nuclear plant accident or the high-level radioactive wastes resulting from conventional nuclear power facilities such as reactors. We must come up with and propose alternative systems to put an end to incineration as quickly as possible.