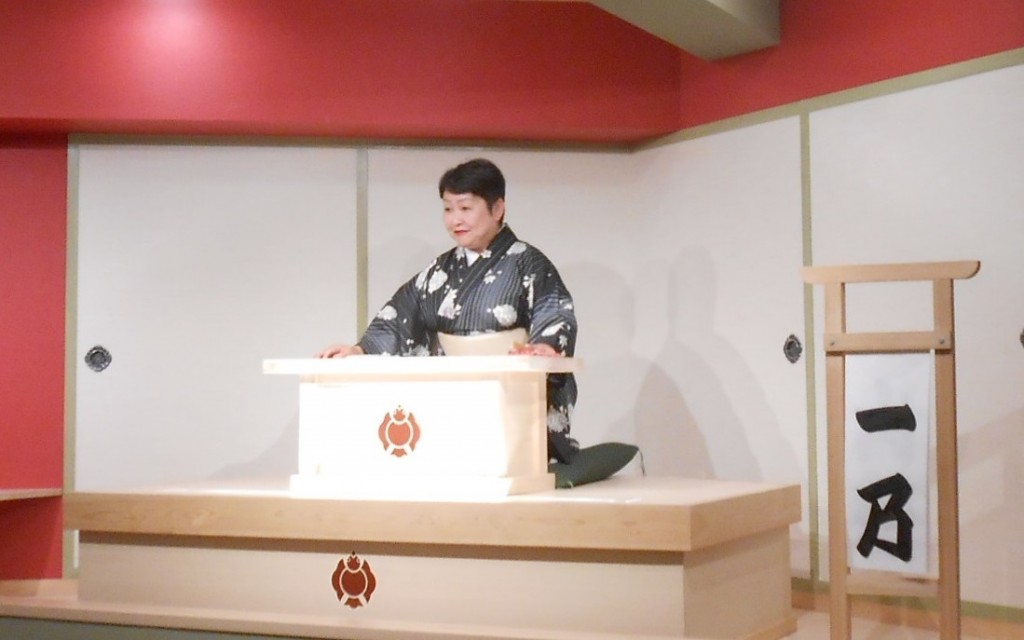 Kazuno Tanabe is a traditional Japanese-style story performer, or a kōdanshi. The history of kōdanshi can be traced back to the samurai warriors, who were thrown out of work after the end of the wartime in the early Edo era, and started to deliver oral presentations of written war stories to commoners in an easily understandable style. Currently there are only 80 kōdanshi performers in Japan.

A kōdanshi tells stories on a stage called a kōza, dressed in kimono. Some of the readership might have seen performances by kōdanshi, who generate sound effects by slapping the shakudai pedestal with a folding fan called a hariōgi.

Ms. Tanabe adapted the history of the Japanese fishing vessel Daigo Fukuryū Maru (S.S. Lucky Dragon 5) into a performable story, or a kōdan, after investigating the facts of the vessel, which was exposed to radiation resulting from a U.S. hydrogen bomb test near Bikini Island in 1954. The main character of the story is the vessel. Ms. Tanabe travels around the country performing the kōdan at the request of various groups, both large and small.

Following the Fukushima Daiichi Nuclear Power Station accident in 2011, Tokyo experienced radioactive fallout. At that time, Ms. Tanabe stayed in her house in Tokyo listening to the news media carefully, prepared to evacuate as soon as the evacuation order was issued. She was very concerned because she doubted that correct information would be reported amongst the mess of the nuclear power station accident, and because she was not well-informed about nuclear power or radioactivity. Her ignorance was the cause of her anxiety. She thought that if she were better-informed, she would be relatively free from the vague fears she was feeling.

The kōdan performances have the function of sharing past experiences to provide present-day audiences with the information necessary to live, and to enable them to make use of the inherited knowledge. Kōdan stories inconspicuously include useful information as part of the entertainment. Many kōdan stories, such as the one about a large earthquake and tsunami, or another concerning flood damage resulting from a river washout, are not only entertaining but also informative. Ms. Tanabe hopes that the kōdan about Daigo Fukuryū Maru will also deliver something useful to those living in the present day.

At the end of the interview, Ms. Tanabe told me: “I would be happy if someone said to me that he or she was able to survive a great difficulty by remembering a kōdan.”