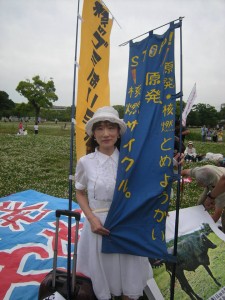 I first met Emika Massion no more than four years ago, just after the March 11 earthquake disaster, but despite a generation’s disparity in our ages, we have remained close friends ever since.

She was born in 1962 in Sapporo. She has made her career as a copperplate engraving artist, botanical artist, and lecturer on art. Thirty years ago she moved to Kushiro, where she worked for 17 years as a full-time art instructor at a private vocational college.

Her father was exposed to black rain1) from the atomic bombing of Nagasaki on August 9, 1945, when he was 13, and from age 56 he began developing cancers in various parts of his body. He lived on, however, until age 70, so Emika had heard a lot about her father’s experiences after being exposed. Being the child of a radiation victim, she developed stomach cancer at an age 11 years younger than her father, and underwent surgery to remove her entire stomach along with her gallbladder. She could never be considered to enjoy good health, but she has a strong sense of mission and continues to work actively to an amazing degree. She is well aware that it is the understanding and support of her husband, Stuart Massion, an American of German descent, that makes this possible for her.

After the Chernobyl disaster, she directed efforts for receiving children from Belarus through the “Kushiro Bridge to Chernobyl” initiative for five and a half years. In the sixth and seventh year of the program, she became a foster parent, receiving three girls at her home for 90 days each. She was motivated to become an anti-nuclear activist when she learned that nuclear power plants providing energy were also the source of materials for nuclear bombs and she became aware that these materials are extremely harmful to living things. Another consequence of nuclear power is nuclear waste, an issue that she is currently taking on.

Right after the Chernobyl disaster, she stayed in a tent village in front of the Hokkaido Electric Power Company for a while and provided support to her companions who climbed up a pylon to stop electric transmission as part of a citizens movement opposed to the construction of the Tomari NPP Unit 1, Hokkaido’s first nuclear reactor. She also participated in a protest at the plant’s gate on July 22, 1988, when nuclear fuel was being transported into Hokkaido for the first time. Locally, she continued publishing a mini newsletter called “Doutou Kazashimo Tsushin” (Hokkaido East Downwind News). At that time, she invited Jinzaburo Takagi, an expert on nuclear chemistry, to Sapporo, and also presided over a speaker training course.

1) Rain heavily polluted with radioactive materials, which fell after the atomic bombings of Hiroshima and Nagasaki.