On March 8, CNIC held an open research seminar at the National Diet. Mary Olson, of the Southeast Office of the Nuclear Information and Resource Service (NIRS), U.S. spoke on ‘Problems regarding America’s MOX program’ and also presented her recent research on gender and radiation. Steven Leeper, former Director of the Hiroshima Peace Culture Center, spoke on ‘Why we cannot live with nuclear,’ focusing on his recent experiences of traveling with Mary and Arnie Gundersen, a former nuclear engineer, on their Japan tour from February 11 to March 15 this year.

The speakers were welcomed by CNIC’s Co-Director, Hideyuki Ban, who also gave some background on issues regarding MOX (mixed oxide fuel, which contains Plutonium) and the differences between the pluthermal plans and conditions in Japan and America. After the end of the cold war, America was left with a plutonium surplus from the dismantling of nuclear weapons and an agreement with Russia meant that they had to dispose of this plutonium by burning it as MOX fuel in their nuclear reactors. Japan, on the other hand, has always seen plutonium as a resource, which would be used as fuel in fast breeder reactors, generating more plutonium, which would provide the energy independence that resource-poor Japan so desired. Of course this dream hasn’t materialized and Japan’s FBR program is in deep trouble, while its plutonium stockpile from reprocessed spent fuel grows and grows. Japan’s pluthermal program was conceived to use some of this reprocessed plutonium as MOX fuel and thus to justify continued reprocessing. Recently the Japanese government has introduced a bill to the Diet which will effectively lock Japan into reprocessing all spent nuclear fuel regardless of whether there are reactors to burn it in.
Even though the situations in Japan and America regarding MOX and plutonium each have their own particular trajectories, there is much we can learn by sharing our experiences. 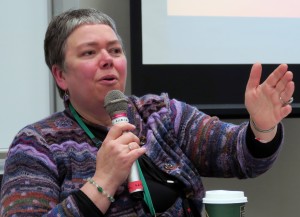 Mary Olson began by giving a brief history of the NIX X MOX campaign in the US, which started in 1996. She introduced us to some of the key players in this campaign, many of whom were just regular citizens, with no expert knowledge on nuclear science or legal proceedings. People like Glenn Carroll, who is now the Coordinator of Nuclear Watch South, were really the instigators of the fight to oppose the Department of Energy’s Savannah River Site (SRS) MOX fabrication factory, getting scientific and legal experts onboard. The tactic of many anti-nuclear groups in the US is to challenge the license of the nuclear facility, which is awarded by the Nuclear Regulatory Commission (NRC). This is a legal process which is difficult to actually win but, Mary pointed out that even if the NRC eventually approves the license of the nuclear facility, it is often delayed for a long time, disrupting business plans of the nuclear industry. Also, the activists are able to draw attention to the serious problems with nuclear facilities. For example in this case, the NRC ruled that a license could be awarded to the DoE, despite the activists claims that DoE’s cyber security for the plant was totally inadequate and would not protect the plant from cyber attack. Even though the activists lost the case, they still drew attention to the very serious problem of the facility’s cyber vulnerability. The MOX factory is in any case in deep trouble, 15 years behind schedule and 750% over budget.Mary also presented some research she has done on the different levels of harm to women and children caused by radiation. Worldwide, safety standards for exposure to radiation are based on the presumption that the person being exposed is an adult man, but exposure to the same level of radiation causes greater harm to women and children. Mary bases this argument on data in the report on the biological effects of ionizing radiation, published in 2006 by the National Academy of Sciences (NAS), examining effects of radiation on victims of the Hiroshima and Nagasaki atomic bombs. She said that she felt very sad to have to use this data, considering how and why it was collected, but, it is the most extensive data available for the general population (as distinct from specific populations such as plant workers), which includes both sexes as well as all age groups. There are also major differences in the type of radiological exposure experienced by the atomic bomb victims and the victims of civilian use nuclear facilities including accidents. Bomb victims receive one dose and only the effects of external exposure (gamma and X-rays) were measured. For victims of nuclear accidents, on the other hand, multiple and internal exposures, where radioactive particles are ingested inside the human body are also factors. However, despite the assessment being incomplete, Mary maintains that the NAS data still shows a marked difference in cancer rate between men and women, children and adults, who are exposed to the same level of radiation. In fact for children in the 0-5 age bracket, for every one boy who is exposed to radiation and gets cancer, the same exposure will result in two girls developing cancer. The data shows that the cancer rate for women exposed to radiation is consistently higher than men throughout their lives, but this difference is especially pronounced in younger children.
Dr. Lyman, a nuclear expert with the Union of Concerned Scientists, estimates that exposure to radiation from a nuclear reactor with a 30% MOX fuel core would double the cancer rate compared to a MOX-free fuel core. This has severe implications for women and children, in fact a girl child would receive 20 times more harm than the ‘standard man’ in the case of an accident at a nuclear reactor using MOX. Mary’s point is that policy-makers are making decisions on whether to use MOX fuel or not based on data relevant only to the ‘standard man.’ They need to know the much greater risks which women and children face and factor these in to their decisions. 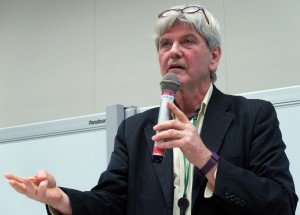 Next Steven Leeper told us about some of his thoughts and experiences as he travelled throughout Japan with Mary and Arnie Gundersen over the past month. Arnie and Mary spent much of their time in Fukushima listening to people affected by the nuclear disaster. He described a woman who they had spoken to, who fled her house when she was ordered to evacuate. When she was tested for radiation, her clothes were found to be highly contaminated. Soon she was having symptoms such as hair falling out and when she went to a doctor, he told her it was the stress of being evacuated, but this is a classic symptom of radiation. Doctors also told Arnie that they had been pressured by hospital administrations not to tell patients that their symptoms may be caused by radiation. Steve said that they met many people who were unwell, that radiation-caused illness is not something that will only happen in the future, it is happening right now. But the cause of their sickness is being hidden from them.
No one can say whether an area is completely safe from radiation. Even in Tokyo, there may be hot spots and you may breathe in radioactive particles, but even if it causes some kind of disease now or in the future, it would be impossible to pinpoint the cause of that disease to radiation from Fukushima Daiichi.
The Fukushima Daiichi disaster has not only taught the Japanese people the disadvantages of centralized electricity generation, but also the disadvantages of centralized minds and thinking.  In the present circumstances, there is no one universal right answer to difficult questions such as whether or not to move back to the parts of Fukushima where the evacuation orders have been lifted or even if it might have been the right thing to evacuate Tokyo as the disaster was unfolding. Everyone must collect their own information, trust their own instincts and make their own decisions, and we must respect those who have made different decisions from us.

In the Question and Answer section, Diet Member Tomoko Abe gave us an update of what is happening in the Cabinet and Diet in terms of the spent fuel reprocessing bill. Although the bill sets up a new fund which is supposed to ensure that even if electricity companies go bankrupt, especially in the deregulated market which will begin in April this year, the fund will cover the costs of reprocessing all Japan’s spent fuel into the future. Diet Member Abe’s view was that this fund would not necessarily be effective and that reprocessing will eventually be paid for by the Japanese people with their taxes. In the meantime, Japan’s plutonium stockpile would grow ever larger. She also mentioned the upcoming Nuclear Security Summit in Washington and how this should be used as an opportunity to pressure Japan to reduce its plutonium.
There were many questions from the audience of about 60 people for both Mary and Steven.  There was a question on how the US disposes of used MOX fuel, but Mary pointed out that the US does not, at present, have any reactors that run on MOX.  As part of the weapons reduction agreement with Russia, the US was supposed to dispose of its excess plutonium by turning it into MOX fuel, but this plan has never actually eventuated. Mary maintains that there are better ways of disposing of plutonium such as immobilizing and storing it but it should never be used as a commercial product in the fuel market. This increases the danger by spreading the plutonium in the community and risking accidents which would release it into the environment.
One participant expressed frustration that the Japanese anti-nuclear movement is quite large in terms of numbers and support from the general public, yet still it is very difficult to change anything at a policy level, especially concerning nuclear power or reprocessing of spent fuel. Mary acknowledged that the legal and political systems of the two countries were obviously different and the tactics used in the US would not necessarily be effective in Japan, but she said that the Japanese movement had more victories than people gave themselves credit for and that the huge efforts of large numbers of people in Japan after the Fukushima Daiichi accident have made significant differences. Steven also emphasized the importance of the people’s will and determination. If the people have strong will then the government will eventually have to follow them.