30 years since Chernobyl…The impact of the Chernobyl Disaster on Japan’s anti-nuclear power movement (NIT No. 171) 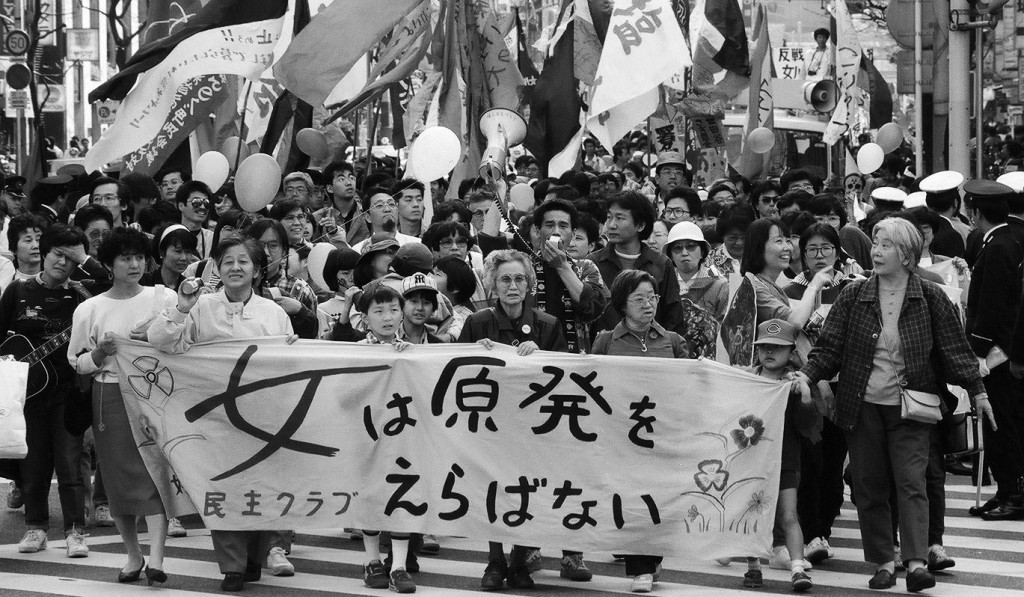 It will soon be 30 years since Chernobyl Nuclear Power Plant Unit 4 went out of control and caused a disaster in what was then Soviet Ukraine in 1986. The radioactive substances emitted from the reactor were dispersed as far away as Japan, 8,000 kilometers away.

The Nuclear Disaster Study Group, established in Osaka, started telephone services on May 17, 1986 to answer public concerns about radioactivity. Immediately after the provisionally laid lines were connected, the telephones stated to ring and never stopped. The group had initially planned to provide the services until May 24, but could not end the services on that day, and continued to answer the phones until the 27th. We at the Citizens’ Nuclear Information Center in Tokyo did not establish a similar dedicated telephone service, but our telephones rang continually, as we expected. Most of the callers were expectant mothers or mothers raising small children.
This does not mean, however, that the anti-nuclear power movement in Japan gained momentum soon after the Chernobyl disaster. More precisely, the large rallies that were seen in Europe and other regions did not occur in Japan. Even in Tokyo, a big city, the number of participants in an anti-nuke rally was about 1,500 at most. This number was small, especially compared with the fact that a few thousand to ten thousand people rallied nationwide during the first half of the 1980s, before the Chernobyl disaster, demanding the cancellation of the public hearings being held as part of the procedure for building more reactors in existing nuclear plant sites. Many participants of these rallies were those who responded to the calls from labor unions to join the rallies. The subsequent decline in power of labor unions was one of the reasons in the background as to why there were no big rallies following the Chernobyl disaster.
Setting aside this movement demanding the cancellation of public hearings as an exception, a major part of the anti-nuclear power movement in Japan has been led by residents of the rural areas where nuclear power plant projects emerged. This fact is worthy of note. Although no large rallies are seen, these local residents’ movements have successfully stopped a number of nuclear power plant projects. No nuclear plant whose construction project was disclosed in the 1970s or later has successfully started operation up to today, in 2016. Regrettably, however, the construction of additional reactors in the plants that were built before the actualities of nuclear power generation became known could not be prevented.
After the Chernobyl disaster, these local anti-nuclear movements continued as they had been doing. It is certain that the Chernobyl disaster provided these movements with a powerful basis. When local citizens’ movements were about to succumb to the nuclear promotion groups supported by power and money, the Three Mile Island accident and Chernobyl disaster occurred, enabling local anti-nuke groups to stage counterattacks.
The Chernobyl disaster also played the role of spreading the anti-nuke movement among urban residents. It took about two years, however.
One event that triggered the expansion of the anti-nuke movement was the repeated media coverage of the food imports that arrived in Japan but were sent back, having been contaminated due to the emissions from Chernobyl and found to include radioactive cesium in excess of Japan’s provisional standards. People remembered the danger of radioactivity, and this made them feel more concerned about those living in former Soviet countries and in Europe.
The first report of such food imports arrived on January 9, 1987. The food was hazelnuts from Turkey. Thereafter, a total of 13 food imports were found to be contaminated by radiation and returned in 1987. CNIC issued a booklet entitled Lethal Ashes on the Dining Table in April 1987, a Part 2 sequel in August the same year and Part 3 in December 1988. A great number of orders came in for these booklets at the time.
After the Chernobyl disaster, CNIC expanded its range of operations, and moved to a slightly larger office in March 1987. The organization renamed its monthly newsletter from Genpatsu Tōsō Jōhō (“Anti-nuclear Struggle Information”), to Genshiryoku Shiryō Jōhōshitsu Tsūshin (“CNIC Newsletter”). The change was made in consideration of the expansion of its readership, including urban residents. In October the same year, CNIC started to issue this English-language bimonthly, Nuke Info Tokyo.

Another event that helped spread the anti-nuke movement was the output adjustment test performed at Unit 2 of the Ikata Nuclear Power Station, located in Ehime Prefecture on Shikoku Island. Output adjustment refers to the increase and decrease in power generation output according to power demand. The reason why such a test is required is that nuclear reactors are basically operated at full output. Adjusting output at a nuclear power plant endangers the integrity of the nuclear fuel, and may impair the reliability of the entire facility. It is also unfavorable in terms of economy. For these reasons, power companies run nuclear power plants at full output while adjusting the output of thermal and hydraulic power generators according to power demand. The test at Ikata Unit 2 aimed to lower output during nighttime hours, when power demand is low.
The test to decrease output reminded people of the Chernobyl nuclear accident, and the resistance movement against the test grew rapidly. Some people believed that “The reason why the output adjustment test is planned is that generation facilities are in excess.” “Nuclear plants are just not necessary.” On February 11 and 12, 1988, a rally demanding the cancellation of the test, organized in front of the Shikoku Electric Power head office, in Takamatsu City, Kagawa Prefecture, drew more than 3,000 people. Most of the protesters were not those related to the conventional anti-nuke movement. They were dubbed the “New Wave.” In spite of the protest, the test was conducted on February 12. The power operator performed the test only on a single day, while it had initially planned to carry out the test over three days. In addition, the company took three hours to decrease output by 50%, while the original plan was to adjust the output to 50% in just one hour.
This “Ikata Action” provided a specific target for many people who had strengthened their belief in freedom from nuclear power generation after coming across such revealing incidents as food contamination. In other words, many people had waited to find a specific, achievable target. The target, which was to persuade the company to give up the test, was only partially achieved, but it produced the great result that many people started to take practical action. 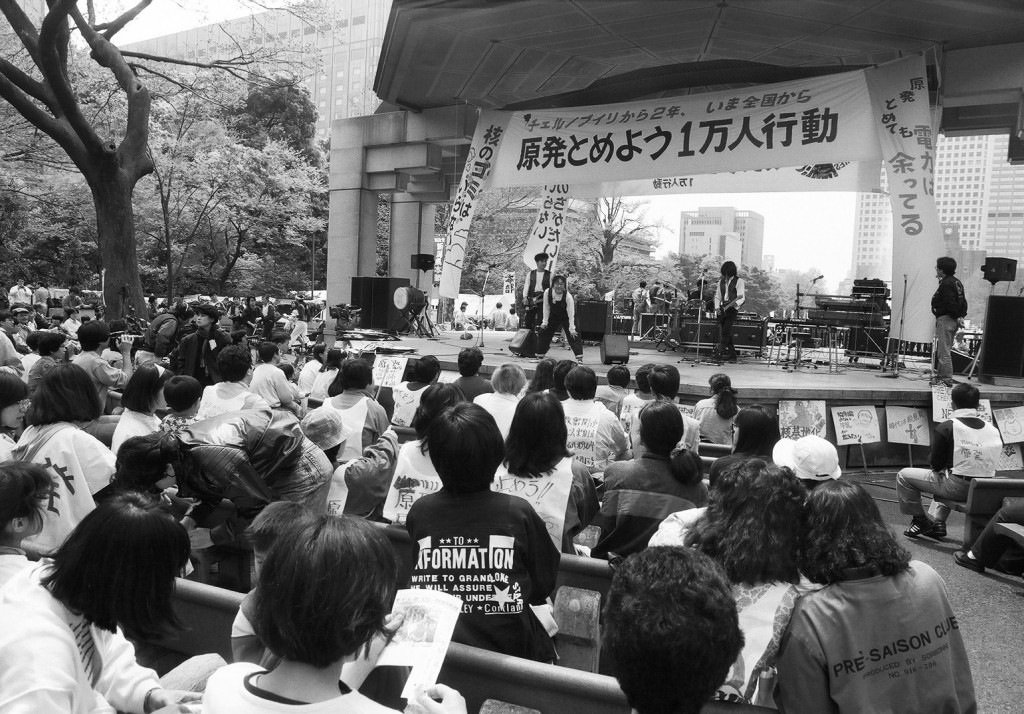 A band plays at the small outdoor theatre of the Hibiya Open-Air Concert Hall in Tokyo, part of “10,000 People’s Action to Stop Nukes” protest (Photo by Akira Imai)

On April 23 and 24, 1988, a large-scale anti-nuke event was organized in Tokyo, under the title “10,000 People’s Action to Stop Nukes — Let’s Gather from around the Nation to Commemorate the Second Anniversary of the Chernobyl Disaster!” On the morning of the 23rd, citizens had a mass meeting with the concerned government ministries and agencies, where they strongly made their demands. In the afternoon, discussion gatherings were held at ten venues, along with various independent events. On the 24th, a large gathering took place in the Hibiya Public Hall and a musical festival in the small outdoor theatre of the Hibiya Open-Air Concert Hall, both in Hibiya Park, Chiyoda Ward, Tokyo. The number of people who turned up exceeded the capacities of the venues, and the banners carried by those who came from around the nation were hung up throughout the park. Many participants wore costumes, making themselves look like a yellow drum using corrugated board, or parading as NPP workers in protective clothing with a mask covering the entire face. A variety of performances, such as live rock music, dancing, and short theatrical plays, were presented freely here and there. Participants numbered far more than 10,000, and when they departed for the demonstration march toward Ginza, a well-known shopping district in central Tokyo, the banner reading “10,000 People’s Action” held up at the head of the march was rewritten to “20,000 People’s Action” (see NIT No. 5).
Following this success, the organizing committee of the event proposed starting a campaign to establish a “Denuclearization Law” to realize a nuke-free society. This campaign chose to take a democratic approach, namely, to have discussions first and then start a signature-collecting campaign. In light of the result of the campaign, this approach was not the best choice for maintaining the movement’s momentum. The campaign could not effectively use the most important period to prevent the momentum from fading away as a temporary fashion. The start of the specific action was very late — it was six months later when the specific framework of the campaign was determined, it was in December 1988 that the National Network for a Denuclearization Law was established, and it was in January 1989 that the signature-collecting campaign started. Regrettably, during the lull, mass media coverage decreased day by day, and mass opinion in favor of freedom from nukes became a very low-profile issue. However, the signature-collecting campaign prevented the complete disappearance of the issue, and enabled the public to deepen its understanding of the problems nuclear power plants may pose other than food contamination.
In April 1990, two years after the 20,000 People’s Action, the National Network for the Denuclearization Law submitted the first collection of more than 2,518,000 signatures petitioning the Diet to establish the denuclearization law. One year later, in April 1991, the second collection of about 765,000 signatures was submitted. In total, more than 3,280,000 people signed the petition demanding that the Diet establish the law. However, the petition was placed on the shelf and was scrapped due to the end of the Diet session without even being discussed. Some Diet members prepared a draft bill and presented it for discussion at gatherings with citizens in Osaka and Tokyo, although none of them managed to prepare a formal bill and have it endorsed by other Diet members for submission to the Diet. As a result, this campaign failed to achieve any specific outcome, ending up leaving those involved with a deep feeling of loss. The failure of this campaign struck a critical blow against the anti-nuke movement.
Nevertheless, local citizens’ movements in rural regions continued as they had done, and various groups in urban areas were patiently committed to issues of their own interest, such as nuclear fuel transportation, workers’ exposure to radiation, emergency evacuation plans, the export of nuclear plants, earthquakes, the nuclear fuel cycle, nuclear wastes, renewable energy, and energy saving, until the Fukushima Daiichi Nuclear Power Plant accident on March 11, 2011. As we now know, the events of that day and after have changed the whole nature of the anti-nuke movement.