Shared Dilemma: The Plutonium Problem in US and Japan 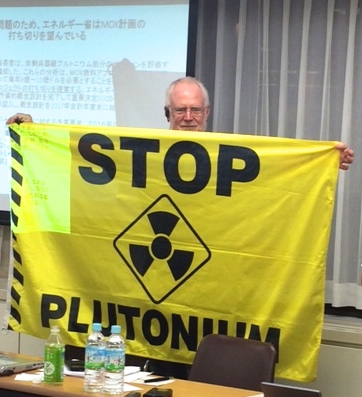 Tom Clements with a clear message

On August 10, CNIC held an open research seminar with Tom Clements, Director of Savannah River Site (SRS) Watch, an NGO based in South Carolina, US.  He gave a report on the many problems associated with the U.S. Department of Energy’s Savannah River Site, one of the largest nuclear facilities in the US, focusing on plutonium disposal.  13 metric tons of surplus weapons plutonium are stored at SRS and 331 kg of plutonium, previously stored at the Fast Critical Assembly (FCA) in Tokai Village, Japan, were shipped to the site earlier this year.
With SRS also accepting plutonium from Switzerland and Germany in March this year and more international shipments planned, Tom said SRS was in danger of becoming an international nuclear waste dump, with no clear plan of how to actually dispose of all this plutonium. The people of South Carolina, and even the Governor of the state, have been vocal in their opposition to this status. Regarding the Japanese shipment, Tom suggested that if transporting the plutonium from Tokai Village to his home state had really been in the interests of non-proliferation, then possibly the people of South Carolina may have been more receptive, but, he claimed, it was carried out purely for political reasons, to fulfill a misguided promise made by the Japanese Prime Minister Shinzo Abe to President Obama during the 2014 Nuclear Security Summit. “If Japan was really serious in reducing the security risk of plutonium stockpiles, then the Prime Minister should have promised that Japan would stop producing it. He should have promised that Rokkasho Reprocessing Plant (RRP) would be scrapped, but instead our leaders chose to make a meaningless gesture that burdens the people of South Carolina even further.”
SRS played a major role in producing materials for the US nuclear arsenal, from the 1950s through till the end of the Cold War in the early 1990s.  Since then, somewhat ironically, one of its major jobs has been to dispose of the plutonium from weapons that are being decommissioned after the end of the Cold War. In 2000 the US and Russia made an agreement to each dispose of 34 tons of plutonium from such decommissioned weapons. The agreed method of disposal was to make the plutonium into MOX fuel and burn it in commercial reactors. For this purpose, construction of a MOX fabrication factory was begun at SRS in 2007, but there have been many problems, both technical (e.g. flaws in the Areva designs which have caused long delays) and commercial (e.g. a lack of reactors that can actually use MOX fuel because of the large costs and problems involved compared to using regular uranium fuel).
The origins of the US MOX program were quite different from the Japanese program.  Though MOX was never seen primarily as a commercial fuel in the US but rather a way of disposing of weapons grade plutonium, according to Tom there are still lessons for Japan in the US experience. In 2014 the US Department of Energy (DoE) Plutonium Working Group estimated that disposing of the plutonium stockpile by down-blending and then direct disposal as nuclear waste would be significantly more cost-effective than burning it as MOX fuel.  Even though the MOX fabrication factory at SRS is about 50% complete, and 5 billion dollars has already been spent on it, in the Fiscal Year 2017 budget, the DoE is proposing that the project be abandoned and instead the much less costly and also faster method of disposal using down-blending be adopted. The DoE figures estimate that MOX disposal will cost upwards of a total of 32.68 billion dollars more than down-blending, packaging and direct disposal. Tom, who believes that the US MOX plant will never be finished or operate, also explained the various other plutonium disposal methods investigated at SRS over the years.
Tom maintains that vitrifying plutonium with high-level waste is perhaps the most efficient method of disposal but the vitrification program at SRS was stopped in April 2002. Compared with MOX, however, down-blending, where the oxidized plutonium is blended with a secret ingredient known as ‘stardust’ and packaged and disposed of as waste, is a better option. The fate of the MOX project is in the hands of the U.S. Congress, which has kept the annual funding at an insufficient level for the project to be completed.
It is a terrible irony that SRS spent the first half of its existence in efforts to produce nuclear materials for weapons and then the second half of its existence in trying to dispose of plutonium produced for these very weapons. But the irony is even more terrible that Japan plans to massively increase its production of plutonium, the substance that is now causing SRS such a headache to dispose of. Japan plans to use this separated plutonium partly as MOX fuel in its pluthermal project, but the DoE has basically abandoned its MOX program due to high costs and inefficiencies.  Lessons for Japan are clear: don’t sink further into the technical and economic quagmire of reprocessing and MOX production.  As a nation that is supposed to be serious about non-proliferation, rather than making empty gestures like shipping 331 kg of plutonium to an already over-burdened SRS, it is essential that Japan scrap the Rokkasho reprocessing plant with its planned production of 8 tons of weapon-usable plutonium per year. Instead, Japan and the US should join together in developing methods to manage and dispose of plutonium as nuclear waste.
(Caitlin Stronell, CNIC)