Exercising Self-Restraint for our Children’s Future: The Use of Ecotubes Nuke Info Tokyo No. 81

My name is Morio Hinoke, and I am a member of The Experimental Village – An Approach to Global Problems Based on Agrarian Values, a project being undertaken by farmers and non-farmers that transcends regional and national considerations. The most pressing global issue facing those of us who live in so-called advanced industrial countries is learning to exercise self-restraint. That means working to restore the natural cycles on which life depends in many different areas, such as food and agriculture, energy, the environment, and large-scale regional development. I live in Toho Village, Narita City, Chiba Prefecture, where I truck organic vegetables directly to consumers and help raise free-range chickens. Through my participation in the Sanrizuka struggle against the construction of the Narita International Airport, I came to know Jinzaburo Takagi and Yukio Yamaguchi of the Citizens’ Nuclear Information Center, and it is at their invitation that I am addressing this workshop today. I will not go into the background of the Experimental Village and instead will concentrate here on our efforts this past summer to install an ecotube ventilation system as part of the Experimental Village’s regional energy self-sufficiency project.

Japan has a humid climate, and seasonal energy use peaks not in the winter months but in August, an unnatural phenomenon that is caused by the intensive use of air conditioners. In the cities, where concrete and asphalt cover the land, heat given off by air conditioners running day and night creates an immense heat island. In the past 100 years, Japan’s average annual temperature has risen by one degree Centigrade (oC), but Tokyo registered an increase of 2.6oC. Radically rethinking urban planning and our current energy-intensive lifestyle has become a matter of great urgency. To find a solution to this problem, the Experimental Village turned to ecotubes, which utilize the power of the soil to produce a natural cooling or warming effect, depending on the season. The temperature of the earth at a depth of one meter is a constant 15 to 20oC. By inducing outside air through a buried ecotube several meters in length, the air can be cooled through heat transfer, maintaining a constant air flow at a temperature of about 20oC in both summer and winter. This ventilation system would greatly reduce reliance on electric heating and cooling devices. A fan at each end of the ecotube draws outside air into a room through the underground pipe. Used air is expelled via another pipe. Powering the fans with solar energy would reduce artificial energy use even further. Here I would like to compute the potential energy savings such a system might offer.

An electric air conditioner/heater consumes an average of 1 kW of energy. Assuming that during the three summer months and the three winter months an air conditioner/heater unit is used an average of eight hours per day, 10 days per month, the total energy consumption comes to about 500 kWh (8 x 1 x 6 = 480 kWh). Converting this figure into total CO2 emissions, we arrive at 500 x 0.2 = 100 kg – C = 0.1 t – C. If 2.3 million households, or 5% of Japan’s 46 million households, installed ecotube ventilation in their homes, they would save collectively in one year about 1.2 billion kWh (2.3 million x 500 kWh = 1.15 billion kWh) per year, or roughly one sixth of the current annual 1 million kW produced by nuclear power. At the same time, that would translate into a 240 million kg (1.2 billion x 0.2 kg) reduction in annual CO2 emissions. 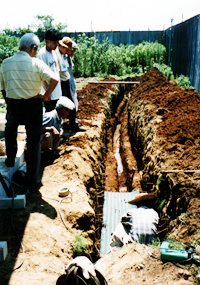 This summer we installed ecotubes in the Kinone Pension House next to Narita Airport’s main runway. The Pension House is one of the centers of Experimental Village activity. The ecotubes are indeed large tubular structures, but the tubes are actually connected to underground cooling chambers. The cooling chambers are called potato pits because they resemble the deep trenches traditionally dug by farmers in Chiba and Ibaraki prefectures to store sweet potatoes during the winter months. Our “potato-pit ecotubes” utilize this traditional storage technique, which has the advantage of reducing the length of tube required, thereby cutting costs.

We experimented with the length of the cooling chambers and with the location of the air intakes and outlets, setting them in different directions. The photo below was taken on July 10, 2000. It shows Village members creating a cooling chamber one meter below ground level. The pit is 50 cm deep and 40 cm wide. It is covered with steel plates on top of which soil is shoveled to bury the structure. One end of the tube is located 17 meters from the west side of the Pension, the other end runs eight meters under the floor inside the Pension, for a total length of 25 meters. Another tube is placed 10 meters from the east side of the Pension and runs 4 meters under the floor, totaling 14 meters. The work was completed in early August. Presently, the Pension has three 125 mm ecotubes, two entering from the west and one from the east, pulling fresh air in and drawing used air out.

Since finishing this work, we have measured the inside temperature several times. Figure 1 shows the measurements taken at 17:30 on 5 August 2000, represented by the diamond dots, and at noon on 10 September 2000, represented by the round dots. As the figure indicates, the western ecotube drew air into the Pension at a temperature of 25oC, which was eight degrees cooler than the outside air. Air continued flowing into the building at that temperature for about two hours, but after that point, the temperature rose by one degree and stabilized. Since we expected the air to be cooled to about 20oC, our system has clearly not fulfilled its potential. The power running the ventilation fans may not be sufficient, or it may take more time for the cooling chambers, which were dug and buried on a hot summer day, to reach their optimal temperature. We will continue taking regular measurements over the next year, and will try to increase the efficiency of our fans.

Our experiment with ecotube ventilation has just begun, and we intend to continue perfecting the system. We hope that at a workshop in the not too- distant future we will be able to report to you that the ecotubes are effectively heating the room in winter and cooling it in summer.