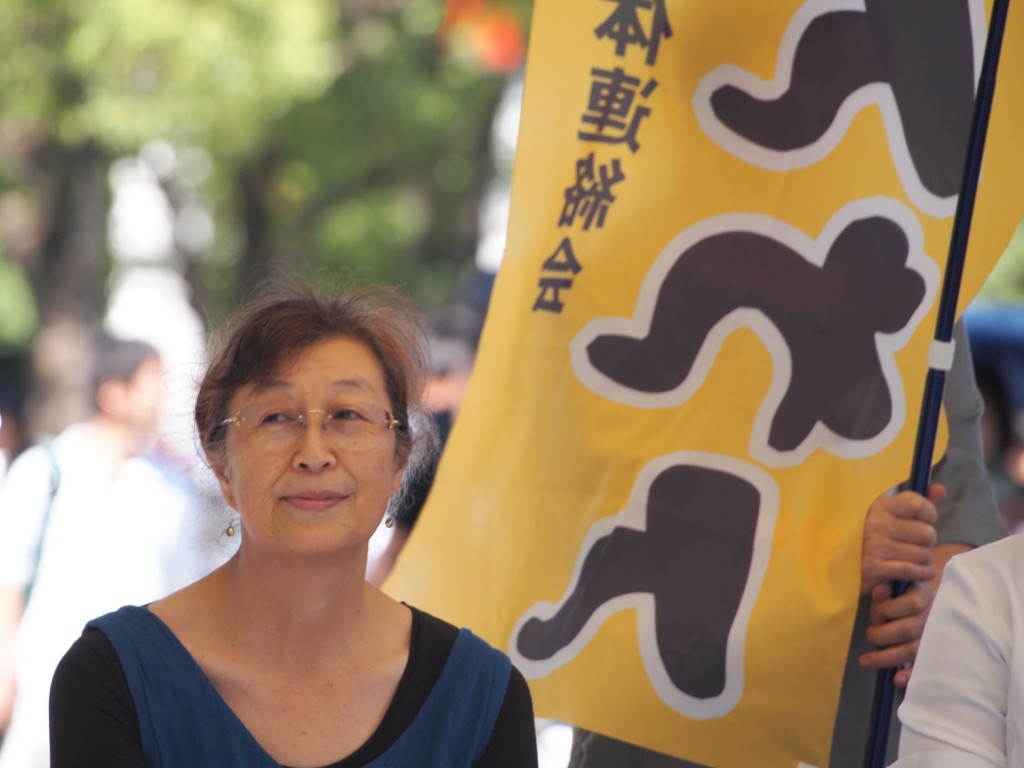 Hello, everyone. My name is Miwa Chiwaki. Today, I would like to introduce to you Ms. Ruiko Muto, the Chair of the Fukushima Nuclear Disaster Plaintiffs and one of the Joint Representatives of Hidanren (the Liaison Committee for Organizations of Victims of the Nuclear Disaster). Born in Fukushima Prefecture in 1953, she is currently living in Miharu Town in the same prefecture. After retiring from teaching at a  school for disabled children, she opened a coffee shop called “Kirara” in a village forest in 2003. While managing this shop, she has proposed energy-saving and an environmentally-friendly lifestyle.
In 1986, the nuclear accident occurred at the Chernobyl Nuclear Power Plant (NPP) in the Ukraine. She came to realize the danger of nuclear power plants, and launched an anti-NPP campaign. Ruiko repeatedly issued warnings against accidents at Tokyo Electric Power Co.’s Fukushima Daiichi Nuclear Power Station (FDNPS) from the viewpoint of local citizens, and continued her innovative and tenacious efforts to demand that the plant’s operator take sufficient measures to ensure the safety of the plant.
On the day before the nuclear accident at FDNPS on March 11, 2011, she was preparing for a rally to demand the decommissioning of the plant’s Unit 1, which would reach 40 years since the start of operations during that year. This means that she had planned to put this reactor off-line before the nuclear disaster occurred…
I came to know Ruiko soon after the nuclear accident. I was living in Fukushima at that time due to my husband being transferred to the Fukushima office of his company in 2007. At that time, I was totally ignorant about nuclear plants and the anti-nuclear movement. Immediately after the nuclear disaster, I fell into despair because Japanese society did not change at all even after this severe and irreversible accident, and because I had been forcibly exposed to radioactive substances from the nuclear plant during my daily life. I gathered related information from the internet, but did nothing other than release weary sighs and cry. But one day, I concluded that nothing would change if I continued to live like this and was determined to do something about it. I searched the internet for information about the anti-nuclear movement and learned about the activities of Ruiko’s group. I then decided to join her group.
In the wake of the nuclear accident, everybody was struggling amid growing anxiety, fear and anger. Ruiko had a constant flow of visitors, telephone calls and e-mails from people wishing to talk with her in an attempt to find a ray of light amid the despair. She met each one of them, listened to them and shared their agony, pains and difficulties. I was also one of the visitors. Members of many other anti-nuclear groups also came to seek her advice.
The plaintiffs’ group has filed a lawsuit against those who are allegedly responsible for the nuclear accident, demanding that they face criminal charges. As the group leader, Ruiko is actively traveling around to talk with people all the time, despite the huge burden she has to shoulder. She has already given hundreds of lectures and speeches. The listeners say they are deeply impressed by her words, and have been encouraged to move forward to find rays of hope for the future.
At the same time, she is energetically engaged in activities to protect the human rights and health of Fukushima residents by serving as a joint representative of Hidanren.

**’Tohoku Ogre’ is a reference to Ruiko’s speech made at a huge rally in Tokyo in September 2011 where she claimed that the usually docile people of Tohoku were so angry about the nuclear accident that they had turned into the legendary ogres of that area.