From the water temperature in the containment vessels and the spent fuel pools (SPFs), and from the state of releases of Xenon-135, which is released when uranium undergoes fission, and other measurements, it can be estimated that the state of the reactors is stable. Moreover, according to a TEPCO assessment, around 40,000 bequerels per hour (Bq/h) of radioactive materials were being released in December (see Figure 1). This is a considerable improvement when it is recalled that this figure was 560,000 Bq/h in December 2015.

Figure 1: Releases of radioactivity from Units 1 to 4 of Fukushima Daiichi Nuclear Power Station (Ministry of Economics, Trade and Industry website) 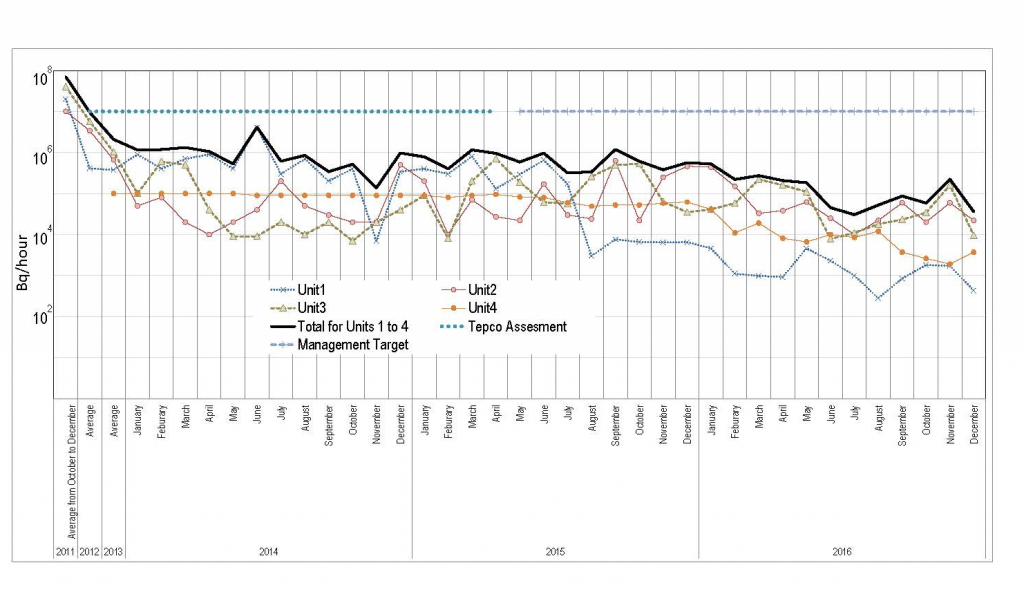 The situation regarding the removal of spent fuel from the SPFs

Except for Unit 4, from which fuel removal has been completed, the SPFs of all other units are now being prepared for fuel removal. The important advance has been the completion on November 11 of removal work for the cover side panels on the Unit 1 reactor building. The installation of a shield on the operating floor of Unit 3 was also completed on December 2. The reduction of the dose rate on the operating floor of Unit 3 had not proceeded as expected, and the removal of spent fuel has been postponed to around the middle of FY2018 from the original FY2015.

TEPCO says that the reason for the reduction was a complex combination of effects, such as measures to prevent infiltration of rainwater, operation of the subdrains, full-scale freezing of the sea side frozen earth barrier, and so on. Originally, TEPCO had aimed at a pumped volume of 70m3/day, but the among the reasons given for the volume not falling that far were 1) the possibility that the flow of groundwater to the 4m base, which is linked with the alternately-layered non-frozen location in the lower part of the sea water pipe trench, was greater than expected, 2) impacts of the structures that pass through the frozen earth barrier, and 3) the possibility that the permeability of the sea side water barrier was lower than expected.

The Nuclear Regulation Authority (NRA) had originally feared that if, when the frozen earth barrier was operated, the groundwater level fell below the water level of the contaminated water in the buildings, contaminated water would leak out into the groundwater. Toyoshi Fuketa, acting NRA chairman, stated at the 49th meeting of the Specific Nuclear Facility Supervision and Assessment Review Committee, however, that “Since the water barrier is letting this much water through on the sea side, it must certainly be letting water through on the mountain side as well,” thus acknowledging that he sees that the effectiveness of the frozen water barrier is limited.