PuPo 2017 Report: International Discussion of Japan’s Plutonium Policy ~Towards change for the future

On February 23-24 CNIC, together with the Union of Concerned Scientists, held an international conference at the United Nations University in Tokyo. The theme of the conference was ‘the US-Japan Nuclear Cooperation Agreement and Japan’s Plutonium Policy.’ This Agreement, which allows Japan to reprocess its spent fuel from nuclear power reactors and extract plutonium, reaches its 30 year period of validity in July 2018 and the PuPo (plutonium policy) conference is the first step in a campaign, using the opportunity of the expiring Agreement, to raise awareness of the serious problems Japan’s plutonium policy is causing locally, regionally and globally, and to demand a rethink of the entire nuclear fuel cycle.

The two-day conference was well attended by citizens from all over Japan, members of parliament, the US Embassy and the Japanese media. The speakers included scientific, technical and policy experts, bureaucrats, diplomats and grassroots activists from Japan, Taiwan, China, South Korea, United States, France and Germany.  Issues of non-proliferation, energy security, nuclear waste disposal and economic issues, as well as more concrete strategies on future actions, were discussed and summarized in the PuPo 2017 Statement which was released at the end of the conference.

A meeting of divergent minds

The conference certainly brought together a large number of perspectives and opinions. It is not often that you find people with such diverse opinions on Japan’s plutonium policy sitting at the same table and this was a unique opportunity to review the reasons why the Japanese government embarked on the nuclear fuel cycle policy and why the US-Japan Agreement was thus negotiated, as well as to how the situation has changed in more recent times. 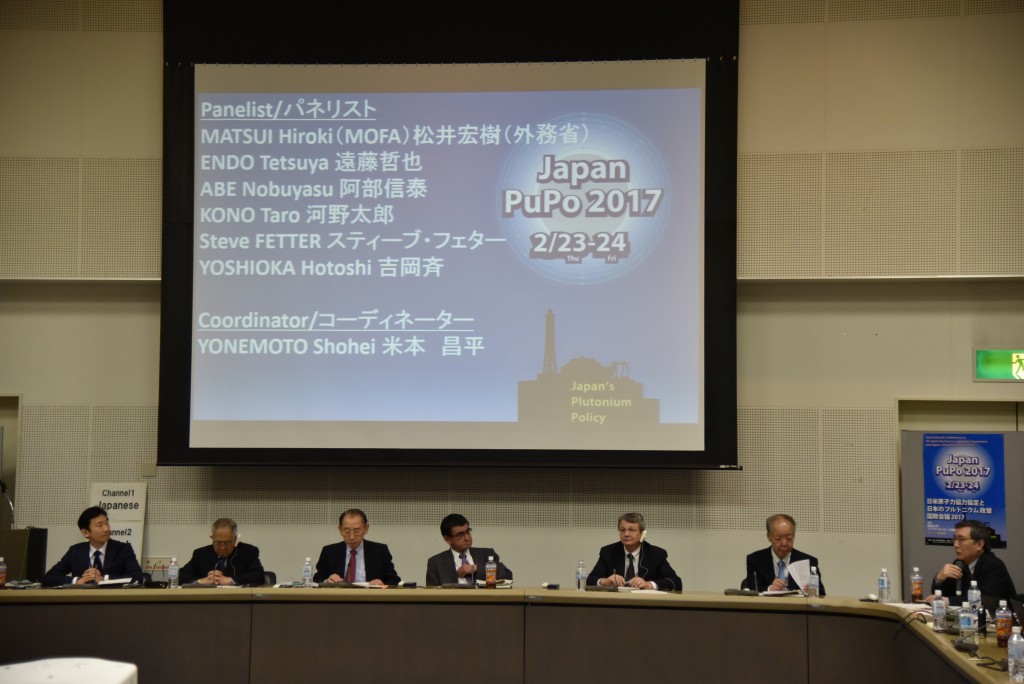 For example, in Session 2 of the conference, we heard from Mr. Matsui of Japan’s Ministry of Foreign Affairs (MoFA), Disarmament Non-Proliferation and Science Department, who explained that Japan was pursuing the nuclear fuel policy in order to make effective use of resources and to reduce the volume and toxicity of nuclear waste. In fact, the Ministry in charge of this policy is the Ministry of Economics, Trade and Industry (METI), which refused to attend PuPo despite long negotiations and its stated responsibility to explain why it is using such massive sums of taxpayers’ money on the nuclear fuel cycle. Mr. Matsui obviously focused on the proliferation issues raised by Japan’s plutonium policy, claiming that ‘Japan’s unique efforts to reduce proliferation risks’ are ‘the basis on which we were granted the right to reprocess.’ He cited Japan’s policy of disclosing its plutonium stockpile levels and Japan’s commitment not to hold surplus plutonium. Mr. Matsui further stated that ‘In my understanding, the US has never voiced concerns about the management of our plutonium in Japan.’ 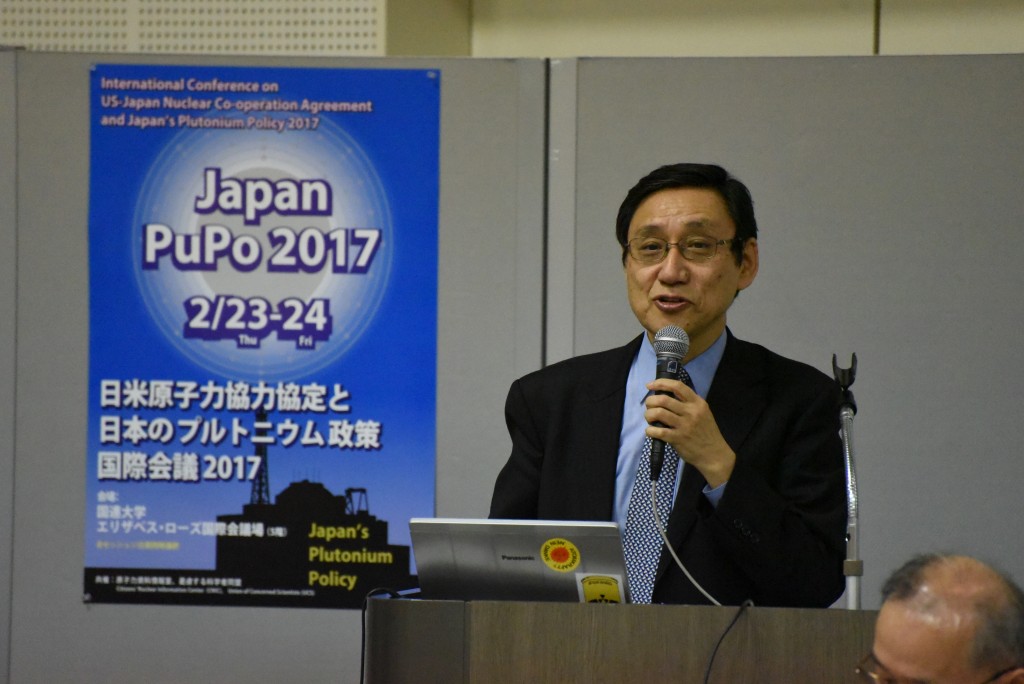 This point was one we had hoped to bring out in the conference and was in fact addressed by Prof. Tatsujiro Suzuki in his keynote address when he suggested that Japanese diplomats simply weren’t talking to the right people in Washington, focusing on the Japan experts there rather than the disarmament/non-proliferation experts. Prof. Suzuki argued that this communication gap was the reason why Japan was ‘not hearing’ the concerns being expressed. He cited Daniel Poneman, John Holdren and Thomas Countryman as three prominent officials who had expressed deep concern about Japan’s plutonium policy. Later in Session 2, Dr. Steve Fetter, who has had a long career in various policy positions in the White House, stated that ‘the US would prefer that Japan got out of the Plutonium business altogether and that was expressed in the Obama administration, although perhaps not clearly enough….’

The second speaker in Session 2 was Ambassador Tetsuya Endo, a retired MoFA official who led the negotiations in the 1980s which resulted in the present US-Japan Nuclear Agreement. Mr. Endo tried to justify Japanese reprocessing through traditional arguments of possible uranium shortages in the future, as well as reducing waste storage space in land-limited Japan and energy security for resource-starved Japan. While these arguments may have had some relevance in the 1980s, many speakers pointed out the massive differences in projections and changes in reality in the 21st century. Even Mr. Endo agreed that Japan needed to have a clearer future vision for its reprocessing policy, possibly a ‘control tower’ led comprehensively by the government, reducing the role of private enterprise.

Also on this panel was Mr. Nobuyasu Abe, who is a present member of the Atomic Energy Commission (AEC), although he was speaking in a personal capacity not as a representative of the AEC. While not dismissing Japan’s reprocessing policy entirely, especially for research purposes, he did suggest that Japan should face the reality of the large plutonium stockpile and the very limited number of pluthermal reactors that are operational, and should be in no hurry to start up the Rokkasho Reprocessing Plant. He also suggested that Japan ask the UK and France to keep its overseas stockpiles in those countries and perhaps consider moving the domestic stock to a ‘Plutonium Fort Knox,’ which the US could set up.

Liberal Democratic Party Member of Parliament, Taro Kono, was also on this panel, expressing completely opposite views from the speakers so far, and indeed from many in his party. He expressed a more immediate, practical set of reasons why the reprocessing policy in Japan continues, pointing out that the present law requires that all spent fuel must be reprocessed in Japan, but also that it is the job of lawmakers to change laws that are not appropriate. Budgets and vested interests are also another reason, especially as the main opposition party in Japan, the Democratic Party (DP), gains much of its support from utility company unions, making it even more difficult to raise opposing voices. A DP lawmaker was present in the audience and made the comment from the floor that not all DP members are receiving support from the utility unions and that bi-partisan opposition to reprocessing was crucial.  In any case, Mr. Kono said that METI is the source of information for most MPs, who remain unaware of the huge problems with reprocessing and the existence of much better alternatives. Education programs for MPs are therefore desperately needed. Mr. Kono also flagged the situation in Aomori Prefecture, where spent fuel from reactors nationwide has been taken in anticipation of the commencement of operations at Rokkasho. If Rokkasho is abandoned, Aomori Prefecture’s stance is that it does not want to become a nuclear waste dump and all the spent fuel it now holds must be sent back to the reactors it came from. Kono said that the government should, instead of starting Rokkasho, negotiate with the Aomori government to store the fuel at Rokkasho until a final repository, possibly at Minami Torishima Island, can be prepared.

Professor Hitoshi Yoshioka put Japan’s plutonium policy in a historical context and again showed how outdated it has become and how, in a changing and increasingly unstable world, we can no longer rely on precedents of the past.

Session 2 brought up all of the main issues the conference aimed to address, and included many of the principal actors and major viewpoints in an open discussion. Although there was most certainly a spectrum of perspectives ranging from abandonment of the present policy and a moratorium on reprocessing, to possible postponement of Rokkasho, and to continuing the policy as valuable research and future insurance, there were also pockets of consensus, with speakers largely agreeing that the Japanese government must make its policy more comprehensible and concrete to America and the world, showing the importance of discussions such as these and the possibilities of moving forward on what often seems like intractable issues.

The other sessions expanded on the themes discussed in Session 2, focusing on the North Asian region (Session 3), technical aspects of plutonium disposal and associated costs, debunking the energy security argument (Session 4), followed by grassroots activism and solidarity, and the local economy in Rokkasho (Session 5).  Speakers from Korea,Taiwan and China gave us updates on the state of reprocessing in their respective countries and confirmed that if there was to be a moratorium on plutonium separation in the region, Japan should take the lead, otherwise the suspicion and nuclear competition in the region would only increase.

In Session 4, Tetsunari Iida, the President of the Institute for Sustainable Energy Policy (ISEP) gave us all a definition of ‘Energy Security,’ from the 4 As: Availability, Accessibility, Acceptability and Affordability to the more recent concept of risk and resilience. He showed that renewable energy by far and away meets all of these criteria so much more efficiently than nuclear energy and particularly the nuclear fuel cycle. He showed that not only is there a viable alternative to the present nuclear and plutonium policy, the world is moving more and more in this direction because renewables actually provide better energy security than nuclear energy could ever do. 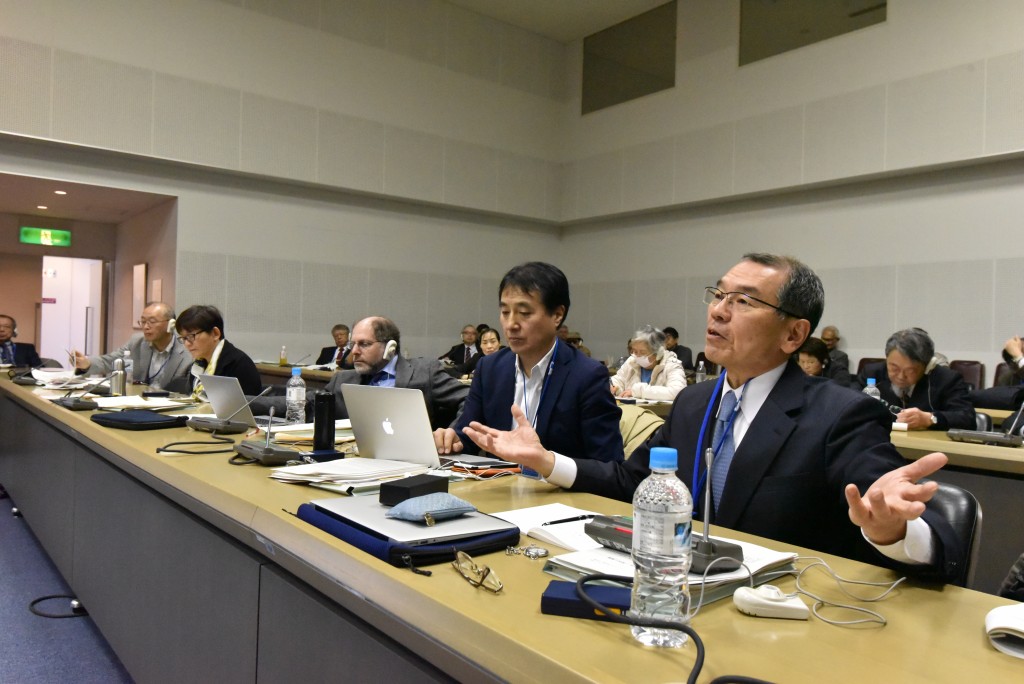 We heard from a German activist, Irmgard Gietl, via video message, in Session 5. She told us how one small town in Germany managed to defeat the project for a reprocessing plant back in the 1980s. The Director who produced the video message, Klaus Striegel joined the session from Germany via Skype. Although the situation is very different now in Rokkasho, participants were reminded of the importance of local grassroots action as well as international solidarity. 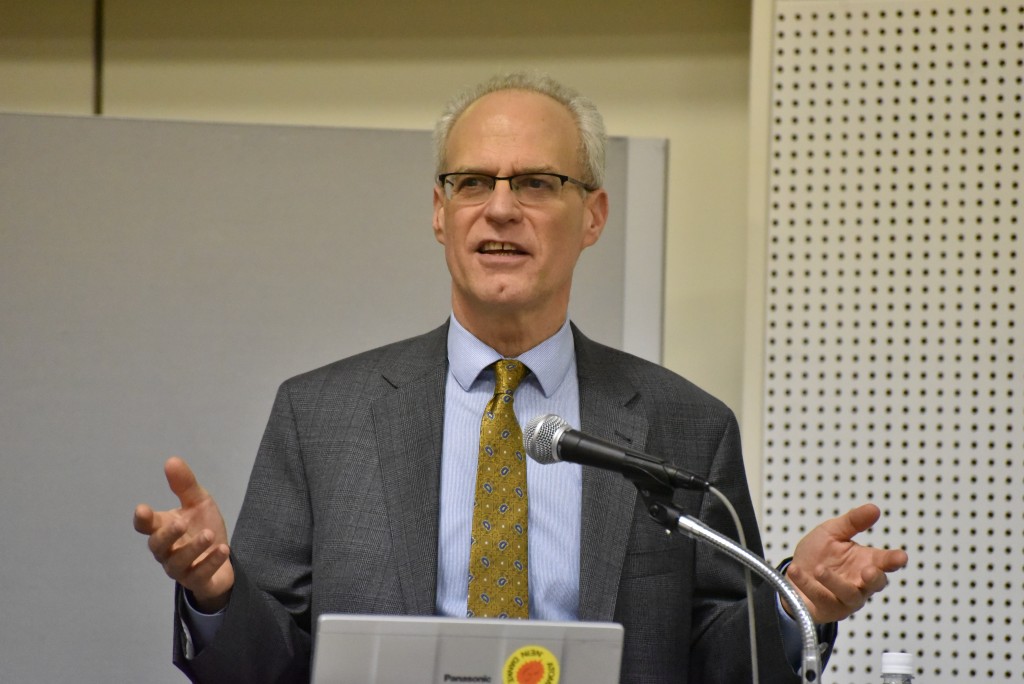 The general consensus of the conference was that in 2018 the US-Japan Nuclear Cooperation Agreement would most likely be automatically renewed. While it seems very unlikely that Japan will request any changes, Henry Sokolski, the Executive Director of the Nonproliferation Policy Education Center, gave a very interesting presentation on the possibilities and processes whereby Congress may intervene in the renewal process. He gave past examples of where Congress had delayed, withdrawn or had renegotiated Nuclear Agreements with other countries. His point was that renewing the agreement will not promote US reactor exports and will likely promote a ‘fissile production race’ in the region. Furthermore ‘Bob Corker, Chairman of the Senate Foreign Relations Committee, has called for a commercial plutonium production pause in East Asia.  He has not endorsed automatic renewal of the US–Japan 123 agreement*.’ Mr. Sokolski argues that if new legislation on the reprocessing of US-origin spent fuel in China receives a high degree of attention in the US, then ‘it is likely to make Japanese reprocessing and re-exportation of US nuclear design information matters of discussion regarding renewal of the US-Japan 123.’

In any case, PuPo2017 certainly renewed our resolve to continue to urge the Japanese government and other decision-makers to stop separating plutonium and to abandon the nuclear fuel cycle policy. Not only that, we also gained valuable insights into how we may forge alliances between stakeholders and create pressure on governments. We will be publishing the proceedings and results of PuPo2017 and making sure we build on the solid foundations laid by all the participants.

* ‘123 Agreement’ is another name for Nuclear Cooperation Agreements, so called because it is Section 123 of the US Atomic Energy Act which requires these agreements to be concluded in order for the US to transfer peaceful nuclear technology and materials to another nation. 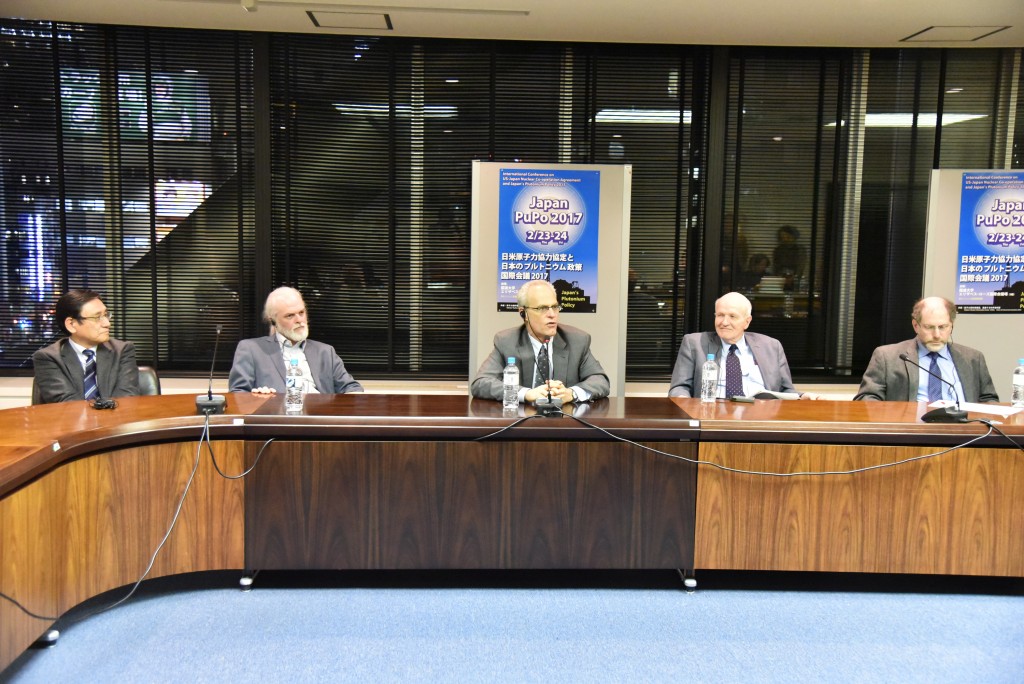