From September 10 through 15, CNIC, together with Tokyo-based think tank New Diplomacy Initiative, organized a delegation of Diet Members and experts to visit the United States in order to draw attention to the problem of Japan’s plutonium policy. With the US-Japan Nuclear Cooperation Agreement (commonly known as the ‘123 Agreement’), which allows Japan to reprocess spent fuel and separate plutonium, coming to the end of its 30 year period of validity next July, we aimed to take advantage of this timing to stimulate discussion and alert US lawmakers to this issue.
The stated aims of the delegation were as follows:
1) Debate the merits and demerits of operating the Rokkasho Reprocessing Plant. Japan has not put forward a plan based on concrete figures to reduce its plutonium, and the realistic prospects of restarting MOX reactors and completing the construction of the Ohma Reactor are uncertain. In this context, can we explore the option of indefinite postponement of Rokkasho operations?
2) Form US-Japan joint committees, stipulated in the 123 Agreement, of members with diverse backgrounds and discuss the following points (also considering the option of Track 2 dialogue for the same objectives):
2.1) Can we conduct comprehensive discussions on the impact of Japan’s Rokkasho Reprocessing Plant on future reprocessing policies of South Korea and China and the impact of the plutonium stockpile on regional and international security and stability, as well as nuclear security?
2.2) As America’s plan to dispose of plutonium through MOX fuel has become derailed, and Japan also has excess plutonium, should both countries cooperate to investigate technical aspects of plutonium disposition methods, in order to reduce proliferation risk? 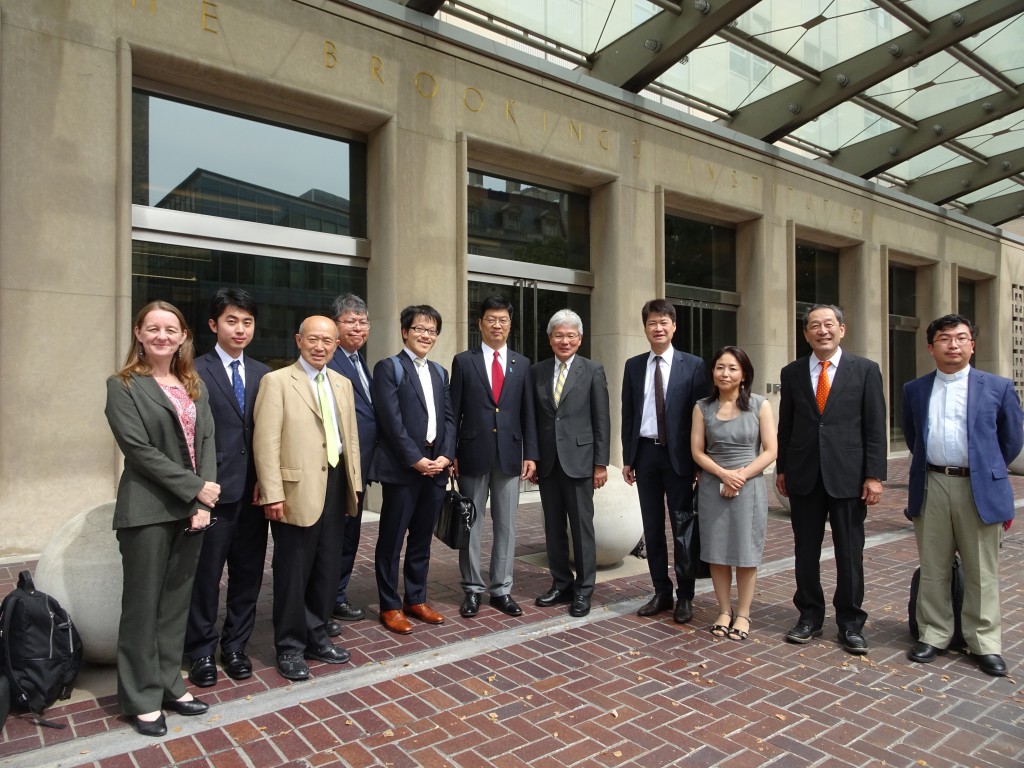 The delegation members were (left to right in the photo): Caitlin Stronell (CNIC), Taichi Kuboki (NDI), Hajime Mikami (former Mayor of Kosai in Shizuoka Prefecture), Kiyohiko Yamada (Secretary-General for plaintiffs in court case against nuclear fuel cycle), Hajime Matsukubo (CNIC), Masashi Adachi (Member, House of Councillors, Liberal Democratic Party), Seiji Ohsaka (Member, House of Representatives, Democratic Party), Masakatsu Ota (Visiting Professor at Waseda & Nagasaki Universities), Sayo Saruta (Attorney at Law/Director of New Diplomacy Initiative), Ryoichi Hattori (Former member of House of Representatives, Social Democratic Party), Kensuke Koito (Mr. Hattori’s assistant). As well, Aileen Mioko Smith from Green Action attended as interpreter.
It was a truly bipartisan delegation, and members held a variety of views on the larger issues of nuclear energy, but our common point of agreement was that the government’s reprocessing policy must not be allowed to continue in its present form without an open, realistic review of the current situation and concrete plans to reduce the 47-ton plutonium stockpile, and certainly not to increase the stockpile by 8 tons a year by starting up Rokkasho Reprocessing Plant.
Over four days we attended three round table discussions at major think tanks in Washington such as Brookings and the Mansfield Foundation. We also attended a breakfast meeting at the more conservative Heritage Foundation as well as a Lunch Meeting in the House Foreign Relations Committee Room organized by the  Nonproliferation Policy Education Center.
All of the above events were closed to the public and the media to enable frank discussions with high-level experts, but we also participated in a public symposium organized by the Center for Strategic and International Studies (CSIS). On the panel were the two Japanese Diet Members from the delegation and two US Experts, Thomas Countryman, the former Acting Under Secretary for Arms Control and International Security and Jon Wolfsthal, Senior Advisor at Global Zero. Countryman made several public comments during his time in office regarding US concern about Japan’s plutonium stockpile and his speech in this symposium was quite specific, stating that Japan’s international credibility as a non-proliferation advocate was at stake. He agreed that the 123 Agreement itself would not be challenged by either side, and would be automatically renewed but that still this was a good time to draw attention to the issue and that there are other ways Japan could commit to not holding unusable plutonium, such as a bilateral agreement to that effect. This agreement should also include a provision to operate Rokkasho only if there are realistic plans for all the plutonium it produces to be burnt in MOX fuel. Countryman also commented on the economic problems that maintaining the nuclear fuel cycle may create. If the rest of the world moves towards cheaper energy but Japan insists on pursuing this vastly more expensive form of energy generation, it may affect the competitiveness of the Japanese economy. He did also say, though, that energy issues must be decided by Japan and not dictated by the US, especially not by retired US officials! 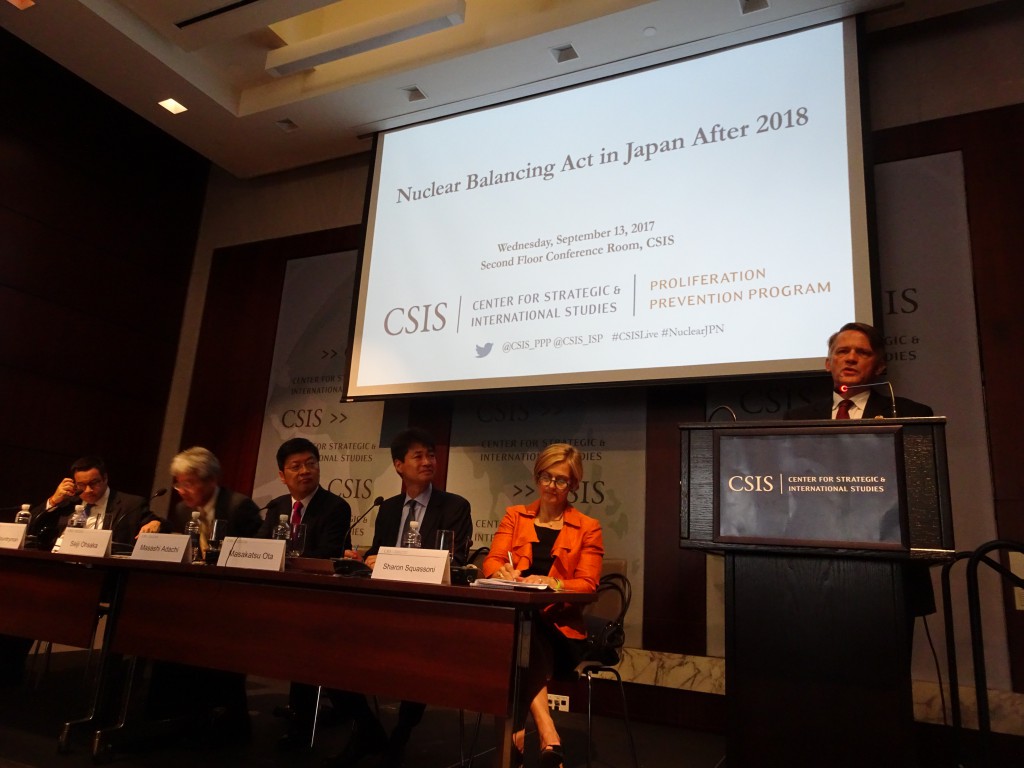 Thomas Countryman, the former Acting Under Secretary for Arms Control and International Security, addresses a symposium at CSIS.

Apart from these larger events, we also met individually with the staffers of 8 Senators and 20 House Representatives and in 4 cases the Senator or Congressman/woman was also present for the meeting. Many of the staffers we met with had studied the issues and shared our concerns that Japan’s plutonium stockpile aggravated proliferation fears in our region, which is indeed an issue that the United States should be concerned about. In many cases our discussions moved to concrete ways the US Congress could raise concern about this issue within the US government and which would put pressure on the Japanese government to behave as a responsible nation and regional leader as well as boost its non-proliferation credibility in the international community.
Our packed schedule over four days certainly enabled the delegation to have fruitful discussions and exchange information with many people. We made several important connections which we will be working very hard to mobilize and coordinate. These kinds of partnerships are vital in order to put as much pressure, from as many different channels as possible, on the Japanese government to make its plutonium policy open and accountable.
<Caitlin Stronell, CNIC>