Naomi Katagiri: Striving for a better future for Niigata Prefecture 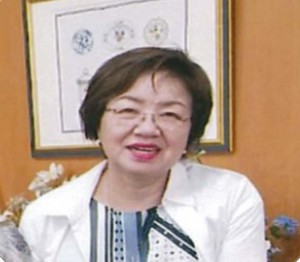 Naomi Katagiri is the chairman of New Future Niigata, which was launched in March 2017. The 67-year-old leader is the vice president of Ishikawa Co., a major house-building company based in Niigata City, and is a first-class registered architect. She played a major role in the victory of Ryuichi Yoneyama in the Niigata gubernatorial election in October 2016. This group was organized for the purpose of supporting the new governor, and providing opportunities for both the governor and citizens to actively exchange views not only on reactivation of the nuclear power plant in Niigata but also on various other issues pledged by the governor in his election campaign. The citizens aim to create a new type of prefectural government by having occasional face-to-face talks with the governor, and encouraging him on to further action at other times. This writer is from Niigata and is also a member of the group.
In Ms. Katagiri’s address to the group’s inauguration ceremony, she said “Our group’s policy is not ‘Niigata First,’ which means to give top priority to benefits for Niigata residents. I believe that the future of Niigata, the whole nation of Japan, and eventually the whole world, will change for the better if our group’s movement and activities continue to expand.” As is well-known, Governor Yoneyama defeated his rival candidate, backed by the ruling Liberal Democratic Party, by a large margin in the gubernatorial election, although the rival had been considered the favorite to win the election. Behind Gov. Yoneyama’s victory, there were the local citizens’ movement against the nuclear power plant and the strong determination among the residents, including Ms. Katagiri, to prevent the restart of the plant’s operations.
Ms. Katagiri has been opposed to nuclear plants for many years. It was in 1969 when Tohoku Electric Power Co.’s plan to construct a nuclear plant in Maki Town in Niigata Prefecture was revealed. The plant was scheduled to become operational in 1986. I have a leaflet written by Ms. Katagiri against the first official hearing on this project held in August 1981. The leaflet, however, was issued by a local mother’s group against the Maki nuclear plant project. The writing in the leaflet still match the current situation. The group criticized the hearing for the following reasons. (1) It was held on the assumption that the nuclear plant would be constructed, (2) the nuclear plant would produce, in addition to electric power, plutonium that can be used for production of nuclear bombs, (3) nuclear power is not an alternative energy for fossil fuels, and (4) nuclear power plants are vulnerable to earthquakes that happen frequently in this country. Based on these reasons, the group called on the residents to oppose all nuclear plants in Japan, for the better future of their children, who should grow up enjoying good health. In August 1996, the nation’s first local referendum on a nuclear plant construction project was held. The result was that this plan was rejected by residents. They jointly stood up against the government’s project to construct a nuclear plant, and raised questions about the nation-building policy the government has been promoting since the Meiji Era.
Born in Niitsu, Niigata Prefecture, Ms. Katagiri graduated from the commercial course at her high school. While working for a construction company, she felt the need to study architecture, and became a first-class certified architect. She did this after she married a newspaper reporter and while raising three children. Her hobby is embroidery, and her skills are as good as a professional. She entered the law school of Niigata University at the age of 51, and graduated at the age of 55. This academic career is quite unusual for a Japanese woman. She has talked about her unique career in a radio program, ‘Morning Essay,’ broadcast by NHK Niigata. Her career is also described in her book “Zenzengo” (Niigata dialect meaning “history repeats itself”) published in 2013.
She was invited to the 10 year anniversary symposium “The Chuetsu Offshore Earthquake and the Kashiwazaki-Kariwa Scientists Association” held in Tokyo on October 9, 2017, and made a speech to the effect that Niigata residents should oppose the restart of the Kashiwazaki-kariwa Nuclear Power Station, as well as electing more women lawmakers in the upcoming general elections. Her passionate speech for the better future of the prefecture made a strong impression on the audience.
<Yukio Yamaguchi, CNIC Co-Director>