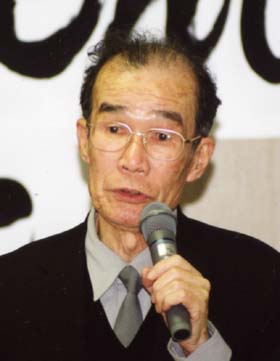 It was the beginning of the age of nuclear energy in Japan. This ‘dream-like’ form of energy was first produced at the nuclear power station on the Tsuruga Peninsula. It was said that when the nuclear reactor came, roads would be constructed, new schools, gymnasiums and libraries would be built and electricity would be ‘too cheap to meter.’ A high-school student at the time, I was building dreams about the new age.

In 1970, Tsuruga No. 1 and Mihama No. 1 reactors started operating and two years later Mihama No. 2 was started up. During 1974-5 Takahama numbers 1 and 2 commenced operation. With that the concentration of nuclear power stations in Fukui Prefecture began. The Fugen and Monju plans were also laid out and people talked about the brilliant future of nuclear power.This was the situation in which, on April 16 1976, ‘the Tsuruga Citizens Group Against Fast Breeder Reactors’ (Citizens Group) was formed. Then three months later ‘Fukui Citizens Council Against Nuclear Power Plants’ (Citizens Council) was formed. It was as a central figure in these groups that Kiyoshi Yoshimura attracted national attention.

In the same year, as a result of findings from material published in the book ‘Nuclear War’ by Soichiro Tahara, it was revealed that two fuel rods from Mihama Reactor No.1 had been broken. Despite the fact that there had been a serious accident in the form of the bending and breaking of fuel rods, the incident was covered up for three-and-a-half years. This cover-up was widely reported in the media.

Immediately after the establishment of the Citizens Group and the Citizens Council, the Mihama No. 1 accident was exposed and the significance of the groups’ existence was widely discussed. After that the two groups got together to take the lead in arguing with the government and contributing to legal cases. Belatedly, I, too, became a member of the network.

After the nuclear power plants began operating, problems and accidents followed one after the other and the issue of worker exposure to radiation came to the surface. People also began murmuring about sloppy oversight of operations. Worker grievances and other problems were also brought to Yoshimura’s attention.

Furthermore, he is very logical in the action that he takes. When he argues with the government or the electricity companies he does so calmly, never losing control. He compiles his materials in advance and sticks to the facts, using them to drive his opponents into a corner. I’m sure his opponents find him very irritating. If he wasn’t so scrupulously logical I don’t think he could have continued for so long.

The Monju case continued for a very long time and ended in a dramatic victory. It might be said that the successive accidents associated with the nuclear fuel cycle made total victory only a matter of time, but when you consider the special effort that Yoshimura put into this issue, you can imagine what an emotional victory it must have been for him.

He is over 70 years old, but there is still no sign that Yoshimura’s critical spirit is waning. I hope that, as a leader in the region, he continues to guide us into the future.