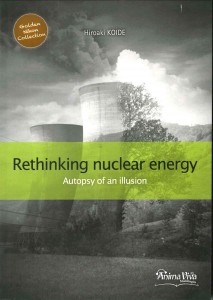 Rethinking nuclear energy
~Autopsy of an illusion
by Hiroaki Koide

This book is an English translation of Genpatsu Zero which was published in 2014. Although it has taken some time for the translation to be published and released in Japan, much of the information and, of course, Koide’s opinions are still very relevant. Hiroaki Koide was Assistant Professor at Kyoto University Research Reactor Institute and is a well-known critic of nuclear power. Especially since the Fukushima Daiichi Nuclear Disaster, he has participated in many speaking tours and his stance of always questioning ‘official’ information and his expertise in being able to provide alternative ‘facts,’ interpretations and solutions has been a great source of support for the anti-nuclear movement as well as the general public. This book is a collection of Koide’s speeches and articles, including data, maps and diagrams and thus, while it lacks a coherent storyline, it is easy to understand and includes a question and answer section on how to protect ourselves from radioactivity and other practical information which can be readily used by everybody.
One of the most disturbing aspects of Koide’s book is that there has been little progress made to date on many of the issues that he raised in 2014. Many of the policies and practices that he warned about three years ago continue without pause or question. For example, Koide levels strong criticism as well as alternative solutions, for issues such as the storage of contaminated water at Fukushima Daiichi (F1), the entire decontamination project, decommissioning of F1 and disposal of nuclear waste. Taking the decommissioning issue, he points out that the first step in decommissioning a reactor is to remove the fuel, but as the fuel in reactors 1 and 3 is melted, he claims it will be impossible to remove all of it as it will be scattered around, not in one ‘compact lump.’ Koide also repeatedly emphasizes the severe exposure to radiation of the workers who will be performing these operations and to reduce this exposure as far as possible, he believes that the most realistic solution is not to decommission F1 but to enclose it in a sarcophagus, as was done with Chernobyl. Even at present we see little progress made with recovering the melted fuel and even robots are having a hard time getting close enough to monitor where it is, let alone remove it. Yet, although the schedule has been adjusted and readjusted, TEPCO maintains it is still continuing with its plan to decommission F1. Koide also claims that decontamination is ‘a waste of national budget’ and this money would be better spent on settling the displaced in a new location rather than trying to make them come back to areas that cannot be called safe, simply to make it look as though everything is ‘back to normal.’
Related to this is the issue of rad-waste disposal. Koide says that waste from F1 should not be distributed to various local governments around the country but should be disposed of in the location where it was generated, which is F1. As the level of radiation which workers are exposed to is already very high at F1, Koide suggests Fukushima Dai-ni or the TEPCO-owned Kashiwazaki-Kariwa plant grounds. As this will not be adequate to dispose of all the nuclear waste in Japan, a further site must be found and Koide suggests that the places that use the most energy such as Tokyo and Osaka must also be considered as candidate sites.
Although some of Koide’s proposals are on the radical side, his sense of justice comes out strongly in this book. As a student of nuclear science, he realized the unacceptable dangers of nuclear energy and he cannot forgive the government nor TEPCO for pursuing this policy, especially after the Fukushima Daiichi disaster has caused so many people so much misery, and especially because they are refusing to take responsibility for this disaster. But at some level it seems he cannot forgive himself either, for failing to get his message heard and prevent this disaster. This sentiment is perhaps felt strongly by many in the anti-nuclear movement, and leaves us with the question of how to convey our message to power-holders in an effective way that facilitates concrete change.
<Reviewed by Caitlin Stronell, CNIC>