State of the Plant
From the water temperature in the containment vessels and the spent fuel pools (SFPs), and from the state of releases of Xenon-135, released when uranium fuel undergoes fission, and other measurements, it can be estimated that the state of the reactors is stable. Further, according to an assessment by TEPCO, around 87,000 bequerels per hour (Bq/h) of radioactive materials were being released from the buildings as of December 2017 (See Fig.1). 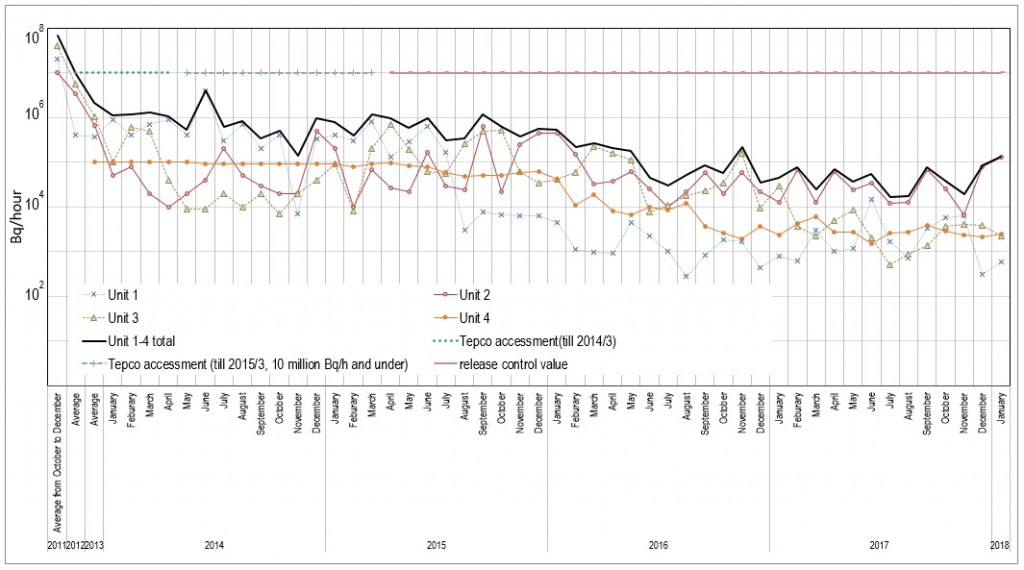 The situation regarding the removal of spent fuel from the SPFs is summarized in Table 1. With the exception of Unit 4, from which spent fuel removal has been completed, all SFPs are currently undergoing pre-removal preparation work.

As of December 14, 921 tanks had been installed on the site (of which 154 are flange-type tanks) and TEPCO plans to have a total capacity of 1.37 million m3 installed by 2020. However, as the upper limit of storage capacity will be reached around 2023-2024 if additional volumes of contaminated water continue to increase at the current rate, it is said that further installment of tanks will require the removal of existing buildings.
Tritium-contaminated water
TEPCO, the government and the Nuclear Regulation Authority (NRA) are calling water treated by ALPS ‘tritium water’. Nuclides remaining in contaminated water after ALPS treatment are summarized in Table 2. While TEPCO stated in July 2017 that it had finalized the decision to release the tritium-contaminated water into the ocean after diluting it with seawater to below the notification concentration (60,000 bequerels/liter), when faced with local opposition the company later said that it had not reached a final decision. The Agency for Natural Resources and Energy set up a task force on tritium-contaminated water to consider five types of disposal methods, stratum injection, ocean release, steam release, hydrogen discharge, and subsurface burial. On this basis, a subcommittee on the handling of water treated by ALPS is now considering the matter.
At the same time, NRA is actively pushing dilution disposal. Attempting to compel local people to accept TEPCO’s decision, Chairperson Toyoshi Fuketa stated in a meeting with Iitate Village Mayor Norio Sugano in December that “there is no other option but to dilute [the tritium-contaminated water] and release it into the ocean.”
However, with the Citizens’ Commission on Nuclear   Energy (CCNE) advocating storage of the tritium-contaminated water in 100,000-ton oil storage tanks as an example, it is not as if there were no other options available. The pushing forward of one option by the regulatory authority, thereby exceeding its mandate, is an extremely grave issue when seen from the viewpoint of the neutrality of regulatory work.
State of radioactive waste materials
On-site waste materials can be broadly categorized into three types. These are solid radioactive waste substances that were generated before the accident, solid radioactive waste materials such as debris that were generated after the accident, and secondary waste generated by contaminated water treatment.
The volumes of waste materials generated after the accident, as of December, were concrete and metal debris: roughly 224,200m3 (% occupancy ratio (similarly below): 69%), felled trees: roughly 133,700m3 (72%), protective clothing: roughly 59.900m3 (84%), waste sludge: 597m3 (85%), discharged concentrated liquids: 9,319m3 (87%), and spent vessels and ALPS waste packed in high integrity containers (HIC), etc.: 3,865 containers (61%).
See here for a List of Accidents that have occured at the plant from July-December 2017